Anti-government posters in all sizes and colours covered the long boundaries of Jamia Millia Islamia in Delhi as protests outside the university against the controversial Citizenship Act and the National Register of Citizens continued on Wednesday. 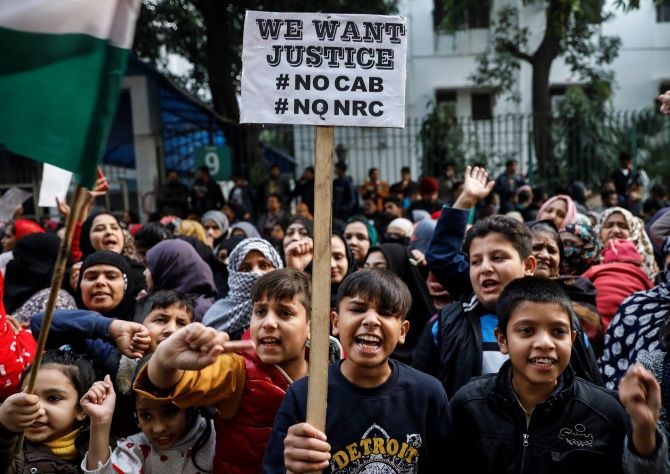 Outside the varsity gate number 7, the protesters, including students and local residents, hung a large map of India for showing the sites of campus protests across the country against the citizenship law.

People from nearby areas and students started gathering outside the gate number 7 around 10.30 am. They raised slogans against Union Home Minister Amit Shah, the Centre and the Delhi Police, demanding withdrawal of the amended Citizenship Act.

"We don't know if we will win or lose, but the fight will continue," said a student while addressing the gathering.

The protest gained momentum after 1 pm as more men, schoolchildren and women from the neighbourhood joined it.

The Jamia teachers' association also took out a peace march to thank various universities that supported the students in their protest against the law.

More than 500 teachers and research scholars took part in the protests with placards having slogans like: "We are anti-CAA, not anti-national".

"If it came to NRC, we vow not to participate in it," she said and asked the protesters to follow the path of non-violence shown by Mahatma Gandhi.

The government wants to deflect attention from the real issues of bread and butter by pitching one community against another, Patkar added. 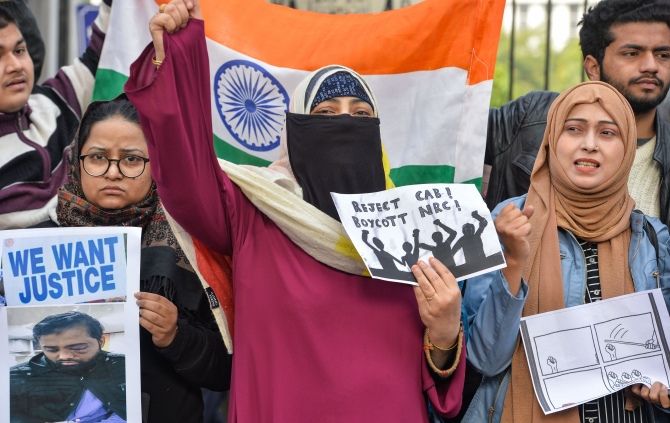 Kumar, who addressed the protesters in the evening, said the demonstration was not just a fight to protect Muslims, but to protect the entire country.

The large gathering erupted in cheers when he said the protests would go down in history as the one that saved the Constitution.

Kumar said people should be more worried about the National Register of Citizens (NRC), which he said was much more dangerous than the citizenship law.

A few protesters taped their mouths and wore black bands, while some children in school uniform stood atop Jamia's boundary walls holding placards.

Some of the people pasted posters on their backs and some had them pinned on their chests. Women huddled into groups, beat tambourine and sang "Hum bhi dekhenge".

Piercing the crowd, a 10-year-old girl carried a poster that took a dig at the government's "Beti Padhao and Beti Bachao" catchphrase, as men walked behind her.

Several women were seen creating posters and writing slogans on the road with a paint brush. A large poster urged the protesters "to maintain the acceleration with zero violence".

A few men brought tea from home, while others carried food and refreshment including biryani, sandwiches, samosa, biscuits, bananas and oranges to the protest site.

Meanwhile, police teams remained deployed on the roads leading to the university.

"We respect their right to protest but it should not get violent and affect others who are not against CAA and NRC," a policeman, who did not wish to be identified, said.

This is the third consecutive day of peaceful protests after the demonstration on Sunday turned violent.

On Monday and Tuesday, thousands of students took to the streets demanding a probe into the use of teargas on Sunday inside the Jamia library as well as the police entering the campus without permission. 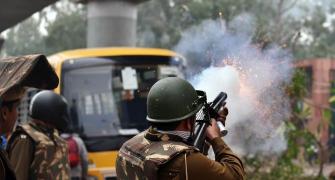 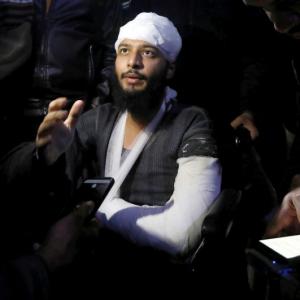