'He made a political speech, a campaign speech, but did not speak on the issues before the country...The prime minister talked for one hour, but did not utter a single word about the Rafale deal' 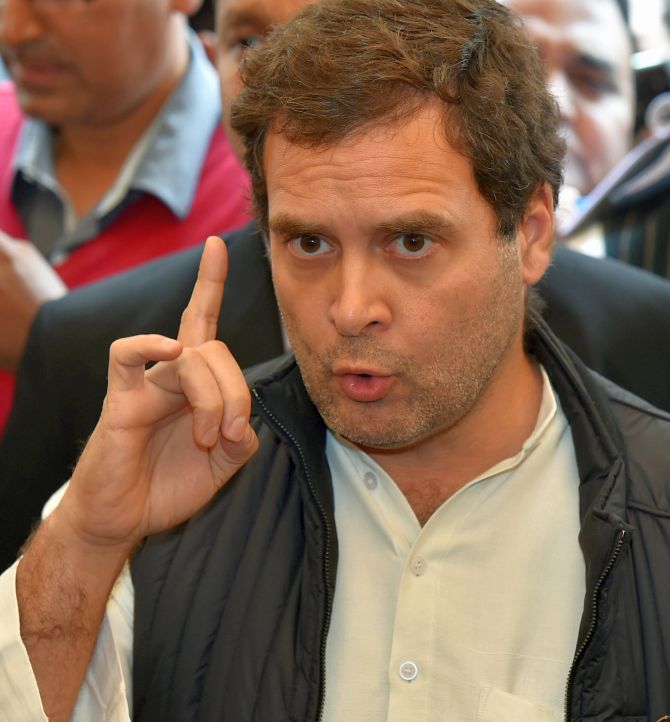 Congress president Rahul Gandhi on Wednesday accused Prime Minister Narendra Modi of protecting those behind alleged corruption in the Rafale deal and said he needs to answer the country on questions posed to him on it and on farmers and jobs instead of making allegations in Parliament.

Rahul Gandhi made the accusation while reacting to Modi's speech in the Lok Sabha, which, he dubbed as a "political and campaign speech".

"People are interested about their jobs, they want to know about their future," she said after Modi's reply to the debate in the Lok Sabha on the motion of thanks on the president's address.

Alleging that something wrong has happened in the Rafale jet deal with France, the Congress chief noted that the country has to understand that the prime minister talked about corruption and had said he will launch an attack on it.

"But in the Rafale deal, there has been corruption and the prime minister is protecting those who have done corruption," Rahul alleged without elaborating.

"He made a political speech, a campaign speech, but did not speak on the issues before the country...The prime minister talked for one hour, but did not utter a single word about the Rafale deal...

"Questions are being asked by the country from the prime minister, but he is not answering... here (in Parliament) you have to give answers and not ask questions to the country instead," he said.

According to Rahul Gandhi, the prime minister can talk against the Congress party at a public meeting, but not in Parliament where he needs to answer questions posed to him by the country.

"He is right in talking about the Congress party, but this is not the place to raise it. You can raise this issue at a public meeting, but not here. Here, you have to answer to the country. You are not to make accusations here...

The Congress chief said there are three-four issues before the country -- what future do farmers have, how to provide employment to youth and whether there was a scam in the Rafale deal.

"We had three clear questions -- You changed the contract in Paris, did you ask the Cabinet Committee on security and what price have you paid for the aircraft," he said.

Rahul Gandhi noted that it is for the first time that the defence minister is saying "we will not tell the country".

"This is the biggest deal for the backbone of the Air Force, but defence minister says we will not tell the country as it is a secret, under a deal struck in Paris".

He said the Congress is only asking questions but not getting answers. "Please answer whether you changed the deal yourself. Whether you paid more or less and whether you took permission that you were to take. It is simple. But answers are not coming," he said.

Instead of talking about farmers, providing them right prices and waiving of their debt, the prime minister is talking about bamboo and honey bees, he added.

"Look this is not an issue of bamboo and honey bees, it is about providing right prices to farmers and protecting their future. The prime minister did not talk about this," he said.

Congress leader Shashi Tharoor said, "The prime minister might be a terrific orator but this speech was a 'farrago' of misrepresentations and half truth".

He said there are many examples in this regard.

"I think the problem was that all those facts and figures given were simply not the kinds of figures that can stand you to detailed scrutiny and I think the public would understand this," he added. 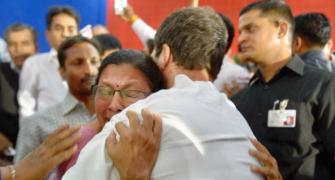 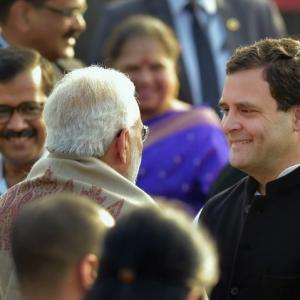