An Amnesty International team, on a week-long visit to Kashmir valley to assess the situation on the human rights front, on Tuesday met a number of separatist leaders.

The two-member team, comprising both Indian nationals, arrived on Monday after the Union government allowed the Amnesty representatives to visit the valley after a hiatus of 20 years.

B J Batra and Gopala Krishnan, the members of the team, met several separatist leaders including Mirwaiz Umer Farooq, chairman of the moderate Hurriyat Conference.

"We are here to talk to all stakeholders with an open mind," Batra told reporters. "Kashmir is very important for the Amnesty. That is why the organization is striving to visit here to see for itself the human rights scenario," he said.

Asking separatists and politicians not to pre-judge their visit, Batra said "wait and see what comes out in our assessment."
His comments came in the wake of apprehensions expressed by hardline separatist leader Syed Ali Shah Geelani.

"Both the members of the team are Indian nationals and, therefore, we should not expect any good from them," Geelani, chairman of the hardline faction of the Hurriyat, had said. Batra said the team would meet all human rights groups and political stakeholders to know their views.

"We want all, including Geelani to cooperate with us and come forward with honest assessments and views," he said "We are here as AI representatives and not as citizens of any country." Batra said the team yesterday met the wife of detained Democratic Freedom Party president Shabir Ahmad Shah. 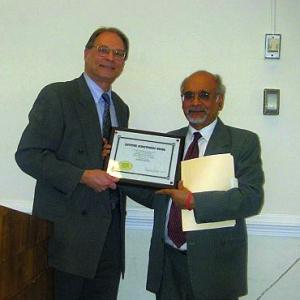