News
Business
Movies
Sports
Cricket
Get Ahead
Money Tips
Shopping
Sign in  |  Create a Rediffmail account
Rediff.com  » News » America's most popular rifle is also the one bleeding it!

As investigators go deeper into the ideological background of Omar Mateen, the perpetrator of the worst mass shooting in modern US history when he killed 50 people at a gay nightclub in Orlando, it's the gunman's choice of weapon that has set the alarm bells ringing. 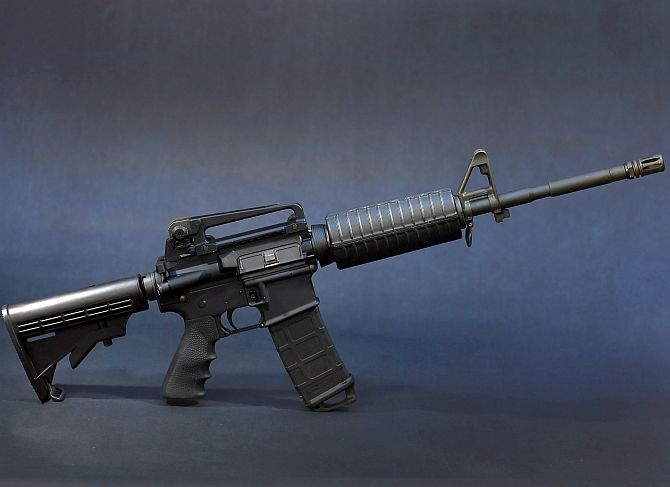 The semi-automatic AR-15 assault rifle model Mateen used was illegally modified and used six months ago to kill 14 and wound 21 in the San Bernardino, California shootings.

Prior to that, in July 2012, James Eagan Holmes used an assault rifle in a movie theater in Aurora, California during a midnight screening of The Dark Knight Rises, to kill 12 people and injure 70.

And then again in December that year, another assault rifle was used to murder 20 children and six adults at the Sandy Hook elementary school in Newtown, Connecticut.

Assault-style weapons have long been a flashpoint in the American gun debate.

The AR-15 Mateen used is the civilian version of the M-16 assault rifle and a reliable estimate suggests there are around 5 million of these weapons in the US, making it America's most popular rifle.

It is favoured because of its relative light weight and anchor points for numerous modifications, and serves as a type of lethal erector set for millions of Americans. While it can’t spray bullets like a machine gun in movies, it does reload quickly, allowing shooters to fire as fast and as often as they can pull the trigger.

Using a .223 cartridge (meaning the bullet diameter is about .223 inches), the AR-15 has a projectile velocity, depending on the type of ammunition, that can be upward of 3,200 feet per second and is accurate up to about 500 yards. Although some states regulate the size and availability of magazines — for instance, California allows only 10-round magazines that cannot be removed from the rifle -- Florida does not.

"The AR-15, it's kind of fashionable... The young generation likes them, the assault-looking guns," a gun store proprietor in Pasadena, Maryland, told The New York Times after the Sandy Hook massacre.

According to a report in The Washington Post, they were outlawed in 1994. But that ban expired in 2004 and Congress opted to not renew it. Gun rights proponents point out that rifles, of any type, are rarely used to kill people in the US. Because of that, researchers have generally found that the assault weapons ban had little impact on US homicide rates while it was in effect.

On the other hand, compared to other firearms, assault-style rifles make it fairly easy to kill or injure many people in within a short period of time. So perpetrators wishing to inflict indiscriminate harm on a large crowd of people often turn to them.

Florida, the American state where the nighclub shooting happened, only requires a person to fill out an identification form and pay $8 for a background check to buy a deadly weapon such as the AR-15.

The owner of the shooting range where Orlando shooter Omar Mateen bought the handgun and semi-automatic used in the deadly rampage over the weekend says he bought both weapons legally and passed a thorough background check.

Ed Henson, owner of the St Lucie Shooting Center, confirmed in a press conference that Mateen bought a handgun and long gun there about a week or 10 days before the attack.

He said Mateen completed the three-day waiting period to buy a handgun under Florida law, but was allowed to walk out with the AR-15 type rifle the same day he bought it, also in compliance with Florida law. Even though Mateen had twice been investigated by the FBI for ties to terror networks, those investigations did not disqualify him from buying the guns.

That loophole, often called the "terror gap", means that the federal government has no way to prevent terror suspects from purchasing weapons, CNN reported. 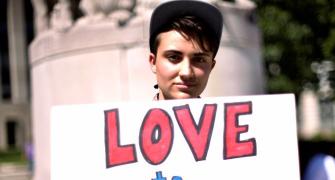 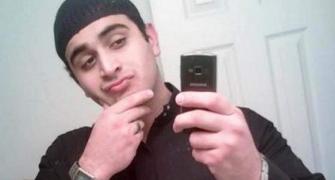 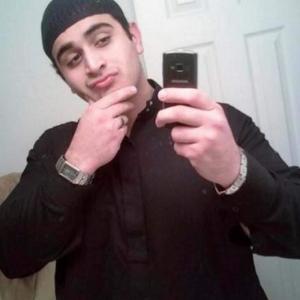