The immense clout of the Ambanis was on full display on the occasion of the first death anniversary of Dhirubhai Ambani, the founder of the Reliance Group of Industries, on July 6.

A jamboree of politicians, industrialists, celebrities and bureaucrats thronged the National Centre for the Performing Arts in Mumbai on Sunday to attend the first Dhirubhai Ambani Memorial Lecture that was delivered by President A P J Abdul Kalam.

The guest list read like a veritable who's who. Anyone who was someone was there. The heavy downpour that would normally have kept entire Mumbai indoors could not even begin to dampen the spirits of the glitterati at NCPA.

Apart from the brightest star of the function, Kalam, who charmed the gathering with a speech delivered in his inimitable and endearing style, there were many other sparkling personalities at the NCPA. 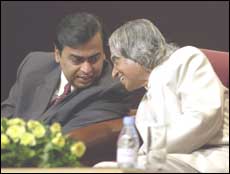 There were some celebrities from the film world too. Bollywood superstar Amitabh Bachchan compered the function.

Once a film star and now India's Minister of State for External Affairs Vinod Khanna attended the lecture with his wife Kavita. Writer and columnist Shobha De and her husband Dilip, and former Mumbai police commissioner Julio Rebeiro too were present.

Listing out the contribution of the late industrialist, the Maharashtra chief minister said that Dhirubhai Ambani was a visionary, who saw beyond the ordinary. Shinde also said that Ambani had rare vision and shown a path to the future generations of entrepreneurs.

He said the state government has decided to observe Dhirubhai's death anniversary as 'Young Entrepreneurs' Day.'

Narendra Modi, paying tributes to Dhirubhai, said, "Just yesterday (on July 5), the waters of the river Narmada had reached the village Chorwad (in Gujarat) -- the birthplace of Dhirubhai Ambani."

He said the people of Gujarat are beholden to the Ambanis for the help and support that they have provided.

Manmohan Singh said wealth-creation led to nation building and Dhirubhai had played a crucial role in helping create wealth for millions of shareholders.

Digvijay Singh described Ambani one of the three pioneers of industrial growth in India, along with J R D Tata and G D Birla. He said that Ambani had the flexibility to change with times and move with them.

He touched upon Dhirubhai's concern for India's agricultural sector and said this one quality set him apart from other capitalists and industrialists. He also urged that Dhirubhai be conferred India's highest civilian honour, the Bharat Ratna.

Dhirubhai's sons, Anil and Mukesh Ambani, recalled their father's dream of translating India into an economic superpower and his struggle to achieve the goal.

The gathering was impressive enough to do justice to Dhirajlal Hirachand Ambani, who rose from humble beginnings to found India's largest industrial empire and become one of the world's richest men.

From the number of industrialists present on the occasion, it was clear that the late 'Polyester Prince' continues to inspire a new generation of entrepreneurs with his tales of gumption and determination.

Although it was a somewhat sombre occasion, marked by attentive silence and muted reflection, the function seemed suffused with the Reliance group's grit: the dedication and promise to keep achieving greater heights of excellence and growth. Indeed, true tribute to one of India's greatest entrepreneurs.

A correspondent in Mumbai
SHARE THIS STORY
Print this article