The Rashtriya Swayamsevak Sangha on Tuesday vehemently denied the charges against some of its top functionaries in the Ajmer dargah blast case, saying 'tirade by political leaders and investigators indicated that the accusations were politically motivated.'

The statement comes on a day when the Rajasthan ATS claimed that the name and phone number of RSS spokesperson Ram Madhav figures in a diary that belonged to one of the accused Sunil Joshi, which was in their possession.

Strongly denying the role of any RSS functionary, including himself, in the 2007 bomb explosion at the sufi shrine, Madhav told mdiapersons in New Delhi that the name or number of any person being found in anybody's diary is not a confirmation of his/her participation in an offence.

"First, police said that Indresh Kumar's name figured in the chargesheet as he attended a meeting prior to Ajmer blast in connection with the conspiracy behind it and now they say my name is there in some diary. It is all fabricated and politically motivated," the RSS spokesperson said.

Reading out a statement from senior functionary Suresh Bhaiya Joshi, Madhav said, "In the last several months, our functionaries have extended full cooperation to the investigating agencies in the hope that they will work fairly. In the process, our activists have endured humiliation and physical torture at the hands of investigators. It is evident from the chargesheet that they have no evidence against Indresh Kumar. The investigators have not even spoken to him once."

Asked if the Rajasthan Anti-Terrorist Squad had questioned the functionaries/activists against whom charges have been framed or those whose names figure in the document, Madhav said those concerned with the probe were aware of these details.

To a question if Indresh Kumar would attend the organisation's national executive scheduled next week, he said the RSS leader would certainly attend the 3-day event.

Earlier in the day, Rajasthan chief Minister Ashok Gehlot said, "The name of Indresh Kumar, senior RSS leader, could not have been added to the chargesheet without any basis and facts. The Anti-Terrorist Squad has done an independent inquiry into the Ajmer dargah blast case and there was no political pressure."

The Chief Judicial Magistrate at Ajmer on Tuesday committed to the sessions court for trial the dargah blast case, in which three persons were killed and 15 others injured in 2007. 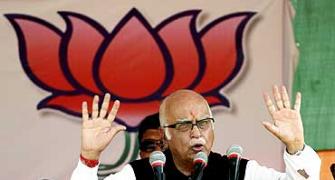