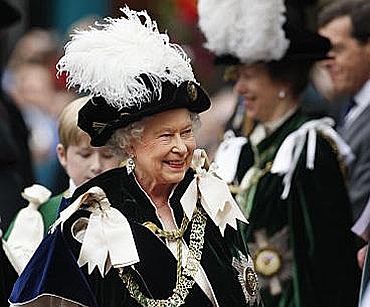 The photo-sharing account, launched on Monday, contained some of rarely published images of the 84-year-old Queen, the Duke of Edinburgh, the Prince of Wales, the Duchess of Cornwall, Prince William, Prince Harry and other members of the Royal family dating back to centuries.

Photographs from the Royal archive masterpieces of early British photography collected by Queen Victoria and Prince Albert in the second half of the 19th century will also appear on the site, the Telegraph reported.

The monarchy's new Flickr account is a collaboration between Buckingham Palace, Clarence House and St James's Palace. In all, there are 28 different sets of photographs and the themes include the Queen and the Commonwealth, Royal Events and Ceremonies, and Latest

Images of two generations of royal children, taken by photographer Marcus Adams from 1926 to 1956, will be on the new site and will include photographs of the Queen and the Prince of Wales as babies.

The Queen is said to be "very enthusiastic" about the new technology initiatives and has personally approved the release of archive photographs featuring momentous and touching moments in royal history.

In 2007, 50 years after her first televised Christmas broadcast, the Queen launched a royal channel on YouTube, the global video-sharing website. Last year she approved the setting up of the monarchy's first account on Twitter, which claims to be "without a doubt the best way to share and discover what is happening right now."

A spokesman for Buckingham Palace said: "The (Flickr) launch is timed to coincide with the Summer Opening of Buckingham Palace, as the site highlights photographs specially commissioned for the Palace's exhibition, The Queen's Year, which opens on July 27."
Source: PTI© Copyright 2021 PTI. All rights reserved. Republication or redistribution of PTI content, including by framing or similar means, is expressly prohibited without the prior written consent.
Related News: Royal, Buckingham Palace, Twitter, Prince of Wales, Queen Elizabeth II
Print this article