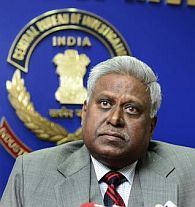 A day after the Supreme Court issued notice to CBI director Ranjit Sinha for allegedly protecting some accused in 2G case, another bench on Tuesday sought explanation from the top cop on similar allegations in the coal scam.

A bench headed by Chief Justice R M Lodha issued notice to the CBI director on a plea seeking an SIT probe against him for allegedly protecting the accused in Coalgate and to keep him away from the investigation and prosecution in the multi-crore scam.

Granting 10 days time to him to file his response to the allegations, the bench, however, refused to pass any order for recusal of Sinha in the case.

The court posted the case for further hearing on September 19.

At the beginning of the proceeding, the bench observed that an order has already been passed by another bench of the apex court against Sinha and no further order is required.

But advocate Prashant Bhushan, appearing for an NGO, which filed application against Sinha, contended that Monday's order was on the 2G case and the court could pass order pertaining to the coal scam.

Thereafter, the bench agreed to issue notice to Sinha and posted the case after next date of hearing of 2G scam, which is to take place on September 15, when the apex court will look into the response filed by the CBI director.

In the application filed in the court, NGO Common Cause had referred to reports about the entry register at Sinha's residence containing names of "influential" persons allegedly involved in the coal scam.

It accused him of scuttling the probe in the "high magnitude" coal scam case in which 20 FIRs for offences of corruption, cheating and criminal conspiracy have been lodged and two charge sheets filed in the trial court.

On Monday, another bench of the apex court, headed by Justice H L Dattu, which is monitoring the 2G scam case, had directed Sinha to come out in "black and white" on averments made against him for allegedly entertaining scam-tainted visitors at his official residence here, saying that it is a "serious" issue.

The application filed by the NGO had referred to the alleged instances that "enumerate the instances of undue interference on the part the CBI director" in the coal scam probe.

The NGO had said that a trusted whistle-blower has brought to the notice of Bhushan some significant information contained in the entry registers of the years 2013 and 2014, which were maintained at the official residence of the CBI director at 2, Janpath, New Delhi.

"Hence, in the light of these facts and circumstances, it is respectfully prayed that in public interest and in the interest of fair investigations in the case, this court may be pleased to direct that Sinha shall not interfere in coal block allocation case investigations and the prosecutions being carried out by the CBI, and shall withdraw from these cases," the application had said.