"We are happy that movements like Anna Hazare and Baba Ramdev are carrying on a vigorous campaign against corruption," Advani said.

"But as far as laws are concerned, what should be the shape of laws, whether it is a Lokpal Bill or any other bill, what should be the provisions of the bill, this has to be decided by Parliament and parliamentary committees. And that is being done," he said.

He disagreed with Team Anna member Arvind Kejriwal's remark that neither the BJP nor the Congress had any future.

"The BJP's future is in the hands of the BJP and nobody else," he said.

"I believe that the BJP, by smashing the hegemony of the Congress which was there till three decades back, converted India's polity into a bipolar polity in which there are two stable poles -- Congress and BJP. It has contributed greatly to the stabilisation of national politics," Advani said.

Advani also defended the Modi government from criticism for its role in the Gujarat riots.

"The Muslims in Gujarat are really happy. The study made by the (Sachar) Commission, set up by the central government about the condition of Muslims in the whole country, pointed out that Muslims in Gujarat, whether in terms of education or prosperity or economic standards, are far better than their counterparts in other states," Advani said. 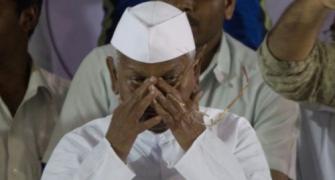 On day 3 of fast, Anna Hazare says sorry to media 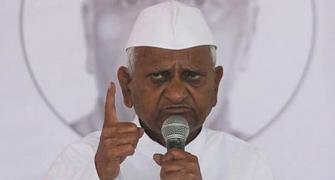 Narayanasamy is a LIAR: Anna Hazare