Former Maharashtra Chief Minister Ashok Chavan and 13 others have been slapped with a money laundering case by the Enforcement Directorate for their alleged involvement in the Adarsh housing scam.

"An ECIR (Enforcement Case Information Report) has been registered under the Prevention of Money Laundering Act on March 5 against 14 persons. The 14 persons are the same who have been named as accused by CBI in their FIR," senior counsel R V Desai appearing for ED told the Bombay high court on Monday.

A division bench of Justices S A Bobade and Mridula Bhatkar were hearing a bunch of petitions filed by social activists Pravin Wategaonkar and Simpreet Singh seeking ED to register case and for High Court to supervise the investigations of CBI and ED.

"The accused persons got clearances to construct Adarsh illegally and obtained flats at a very low price compared to market value. The accused projected tainted property as untainted. Prima facie it constitutes offence under section 3 of PMLA," the ECIR states.

The high court took the ED to task for the way it has dealt with the case.

"In December last year the court had asked ED to make a statement on applicability on provisions of PMLA. But even today the agency is not able to make a conclusive statement on PMLA," Justice Bobade said.

"You (ED) say investigation has been initiated with registration of ECIR. So you must be having some material

before you at this stage. On the basis of that material you should be able to make statement on when you will register an FIR in the case and when you will arrest the accused persons," the bench said.

Desai told the court that the agency needs to find out if the accused persons had procured flats in the Adarsh society through funds which were proceeds of crime.

"We are awaiting CBI to complete its investigation and submit its charge sheet. ED will then take a decision on registration of FIR and arrest of accused," Desai said.

CBI informed the court that it would complete its probe by June 15 and file its charge sheet thereafter. The court has adjourned the matter till June 18.

The ED had earlier issued summons to the members of the society directing them to furnish information regarding purchase of flats in the 31-storey housing society in south Mumbai and mode of payment.

The CBI, which registered a case in January last year against 14 people, has so far arrested nine persons including IAS officers Jairaj Phatak and Ramanand Tiwari, retired major generals A R Kumar and T K Kaul and P V Deshmukh, a former deputy secretary in the Urban department. 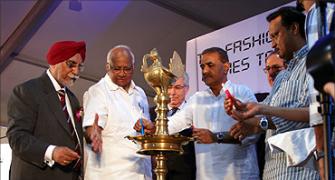