Dentist Nupur Talwar on Wednesday moved the Supreme Court seeking bail in the case of twin murder of her daughter Aarushi and domestic help Hemraj four years ago in Noida.

Nupur, who is in judicial custody, filed a fresh plea for bail in the pending petition before the apex court in which she has sought review of its decision giving a go ahead to criminal prosecution against her and her dentist husband Rajesh Talwar.

Talwars' lawyers clarified that they have not challenged Wednesday's order of a Ghaziabad court denying bail to Aarushi's mother.

"In fact, an application for bail has been filed in the pending review petition which is likely to be listed for hearing on Friday," their counsel said.

The apex court had on March 15 decided to hear in open court the petition filed by the dentist couple seeking review of its January 6 order in which it had cleared the decks for the couple's trial in the murder case by dismissing their plea to quash criminal proceedings against them.

In between, a non-bailable warrant was issued by the Special CBI Court in Ghaziabad after the Allahabad High Court had withdrawn the protection given to her.

After that Nupur had approached the apex court seeking bail and protection from arrest.

However, the apex court had on April 27 directed her to surrender on April 30 before the trial court in Ghaziabad.

After the CBI court had dismissed her plea, she was sent to the judicial custody. 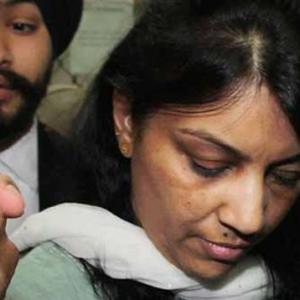