The Congress and BJP are apprehensive that AAP might eat into their votes among the Patel community, Kshatriyas, a section of minorities, and Dalits, thus delivering a fatal blow in the closely-contested seats.

But the local BJP is elated over the entry of AIMIM as there will be a contender for minority votes apart from the Congress in seats like Bhuj and Mandvi, which have considerable Muslim electorate. 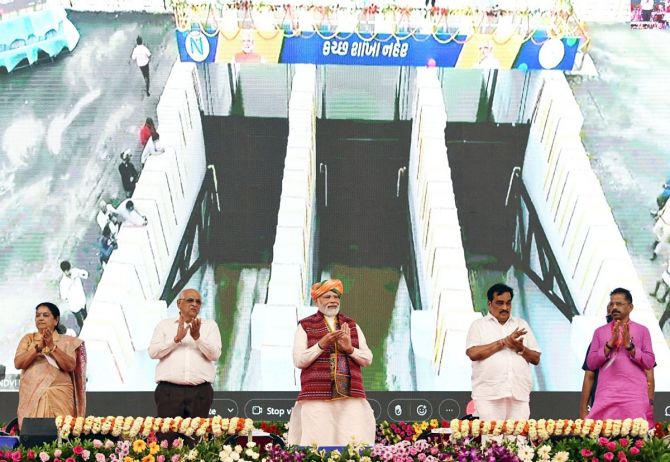 The Bharatiya Janata Party is confident of maintaining its winning streak in Kutch district in the Gujarat assembly polls even as the Congress is carrying out a silent campaign in rural areas and the Aam Aadmi Party is setting the stage for a three-cornered fight by throwing its hat in the ring.

The All India Majlis-E-Ittehadul Muslimeen (AIMIM) is contesting in two minority-dominated seats.

Kutch, which goes to polls in the first phase on December 1, has six assembly constituencies -- Abdasa, Bhuj, Rapar -- all bordering Pakistan --and Mandvi, Anjar and Gandhidham.

The district has around 16 lakh voters spread across the six constituencies, out of which male and female voters are equally proportionate. Muslims comprise around 19 per cent of the total electorate, whereas the Dalits comprise around 12 per cent, and the Patels, including the Leuvas and Kadvas, constitute about 10.5 per cent.

The Kshatriya and the Koli communities comprise around 6.5 per cent and 5.2 per cent of the electorate, respectively.

Although Dalits, Kshatriyas, Kolis, Brahmins, and Rajputs have been the committed voters of the saffron camp for the last two decades, a large section of the Patels, who have been with the BJP till 2012, went against the saffron camp following the 2015 Patidar agitation.

The Congress, on the other hand, has been the first choice of minorities and also for a section of Patels, Kshatriyas in rural areas, and other smaller communities like the Rabari.

The AAP, which has carried out a campaign blitzkrieg in the arid region with Delhi Chief Minister Arvind Kejriwal conducting a Tiranga Yatra in Kutch, is stressing fundamental issues such as education, health and water.

The AIMIM stresses the development poll plank of minorities in the area.

The Bharatiya Janata Party, which has been winning a majority of the six seats in the Kutch district since 2002, is hopeful of making a clean sweep this time riding on both development plank and divided opposition.

“We are confident of making a clean sweep this time. There is no opposition to BJP as the people are with us for the development we had carried out post-earthquake in 2001," Kutch district media-in-charge Satwik Gadhvi told PTI.

According to BJP sources, although the party is not attaching much importance to the scattered opposition in the district, resentment among a section of party workers over the selection of candidates is a matter of concern as, in some places, it has altered the party's caste equations.

In the Abdasa seat, the BJP's candidate is former Congress turncoat and sitting MLA Pradyuman Sing Jadeja, from the Kshatriya community.

Apart from candidates of Congress and AAP, an independent candidate from the Kshatriya-Jadeja community is also contesting the polls.

The independent candidate used to be a BJP sympathiser earlier.

In the Bhuj seat, the party has replaced its two-time sitting MLA and assembly speaker Nimaben Acharya with local party leader Keshubhai Shivdas Patel, known for his organisational skills. Supporters of Acharya are not happy with the development.

In Anjar, the party has replaced its sitting MLA Vasanbhai Ahir with party leader Trikambhai Chhanga.

In Mandvi, the BJP has picked Anirudhh Dave over its sitting MLA Virendrasinh Jadeja.

Jadeja has been given a ticket from the neighbouring Rapar seat, which the Congress had won in 2017.

"For us, it is not the opposition, but resentment among a section of party workers is a matter of bit concern. In some seats, people from the same community, just as our official candidates, are contesting as Independents," a senior district BJP leader said.

The Congress is carrying out a very low-pitch campaign. The opposition party is doing its best to avoid the minefield of communal politics and is focusing more on governance issues.

For the Congress, winning back the district, and especially retaining the two seats it had won last time, is a big challenge.

"We are confident of winning all the six seats in the Kutch district. The people here are fed up with the misrule of the BJP. The BJP is using all tricks like communal campaign to everything at its disposal to win the election," Congress district president Yajuvendra Jadeja said.

The Congress, like in the rest of Gujarat, is carrying out a silent campaign in Kutch also by reaching out to the masses in every remote corner of the region, trying to encash anti-incumbency against the BJP and its promises on governance issues if voted to power.

However, the entry of the AAP and AIMIM has disturbed the poll arithmetic of the region.

The Congress and BJP are apprehensive that AAP might eat into their votes among the Patel community, Kshatriyas, a section of minorities, and Dalits, thus delivering a fatal blow in the closely-contested seats.

The local BJP unit is elated over the entry of AIMIM as there will be a contender for minority votes apart from the Congress in seats like Bhuj and Mandvi, which have considerable Muslim electorate.

With AIMIM in the fray, the Congress is working to minimise the damage that the AAP and AIMIM may cause.

The AAP stresses governance issues in the arid region and has promised to end the region's water crisis if voted to power.

"The people of this area, especially in remote areas, lack basic amenities like education, health, and water. For us, good governance is first and foremost," Kutch district AAP media in-charge Ankita Gor said.

The biggest positive aspect for the AAP in the election is the freshness it brings to the decade-old binary of Congress and BJP in the state's political arena and its track record of delivering good governance, party leaders said.

According to locals, the negative factor for AAP in the Kutch region is the absence of the organisational strength to take on the well-oiled election machinery of the BJP and Congress.

The AIMIM said it is contesting only two seats in the entire Kutch district, so the allegation that they are here to cut in Congress's vote is baseless.

In the 2019 Lok Sabha polls, the BJP won the Kachchh Lok Sabha seat, which it has been winning since 1996, by pocketing more than 62 per cent of the total votes polled, whereas the Congress bagged just 32 per cent.

Elections for the 182-member Gujarat assembly will be held on December 1 and 5. The votes will be counted on December 8.

Pradipta Tapadar in Kutch
Source: PTI© Copyright 2023 PTI. All rights reserved. Republication or redistribution of PTI content, including by framing or similar means, is expressly prohibited without the prior written consent.
Print this article 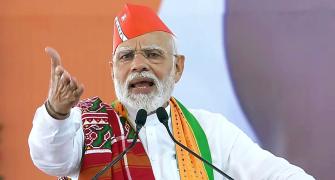 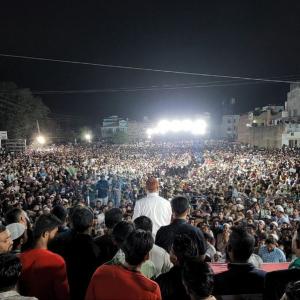 Owaisi has a game-plan to snatch Godhra from BJP 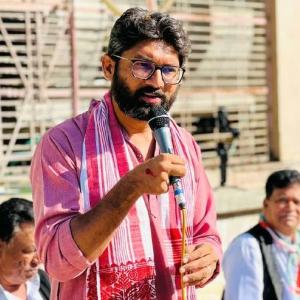