A year on, kin of victims remain oblivious about Delhi riots probe

A year on, scars of the communal violence that convulsed northeast Delhi last February continue to haunt the kin of victims, many of whom say they remain unaware of the status of police investigations relating to their cases. The police, however, say they are taking forward over 750 cases registered in connection with the conflagration.

The riots had erupted in northeast Delhi on February 24 last year after clashes between citizenship law supporters and protesters spiralled, leaving at least 53 people dead, around 200 injured and also led to extensive destruction of property, including houses, shops, schools as well as religious places.

Nizamuddin, whose younger brother Jamaluddin was killed by a mob in Shiv Vihar, says he has no idea about what is happening in his case.

"They killed my brother near our home in Shiv Vihar. Officials of Delhi Police's Crime Branch call us regarding the investigation, but I have no idea what is happening in the case," Nizamuddin said.

He said he also got injured during the attack and had to be treated with metal plates in his broken hands.

Twenty-year old Salim, a scrap collector, is caught up with the police work related to his elder brother Jameel's killing during the riots and is also taking care of his parents.

"In Jameel's case, police call us to Daryaganj for identification. Apart from this, we have no idea what is happening in our case. After his death, our financial condition has also become very bad," he said.

Trying to control her trembling voice, his mother Noor Jahan says she misses her son everyday.

Jameel (26), who used to work as a labourer, went missing when he had gone out to buy milk. Later, the family got a call from GTB hospital, which said his body was kept there.

Living in Uttarakhand's Paudi Gadhwal, Devender Negi whose brother Dibar Negi's body was disfigured and burnt in Shiv Vihar, is concerned about the poor financial condition of his family.

"The Crime Branch of Delhi Police had called me once but due to the poor financial condition of my family, I could not reach Delhi. Since then, no one has called me or communicated with me. We have less hope in connection with the case as nothing has happened in one year," Negi said.

Negi said he is worried about the poor health of his parents and was looking for an odd job.

Another victim of the riots was IB staffer Ankur Sharma whose body was fished out from a drain close to his house in Chandbagh area.

His brother Ankur Singh said the family has shifted to Ghaziabad now.

"Six months back, we shifted to Ghaziabad as we missed Ankit a lot in that house," he said.

He felt investigation into his brother's murder was progressing "slowly" but expressed faith in the judiciary.

"The government has announced that they will name a road in my brother's name at our village in UP's Muzaffarnagar. They will also install a statue of my brother and a gate with his name inscribed in it. The work of road has started," Ankur stated.

He recalled his brother as a frank man having both Hindus and Muslims as friends. Among those who lost their lives also include a 42-year-old Delhi Police head constable Ratan Lal. He sustained injury during stone pelting at Gokalpuri and succumbed to injuries.

The then Deputy Commissioner of Police (DCP), Shahdara, Amit Sharma and then ACP (Gokalpuri) Anuj Kumar were also severely injured while trying to quell the protests.

Delhi Police Commissioner S N Shrivastava last week said 755 FIRs were registered in connection with the riots and his force ensured a "free and fair" investigation.

"You are aware of the riots which led to 53 deaths and 581 injuries. Riots reached its peak on February 24 and 25 last year. We made it a point that no one had a grievance that their complaint was not acknowledged," he said.

Delhi Police formed three SITs in its Crime Branch to probe 62 important cases, including 53 cases of murder and rioting.

A separate case was registered to unearth the conspiracy behind the riots, which was investigated by the Special Cell of the Delhi Police while the remaining 692 cases were investigated by northeast district police, police officers said.

"To ensure a free and fair investigation, technology was extensively used and the evidences which are based on science and technology cannot be refuted," the Delhi Police chief had said.

According to the police, overall, 1,818 people have been arrested so far in 400 cases in connection with the riots. They said 342 charge sheets have been filed by Delhi Police by the end of 2020, out of which the trial court has taken cognizance 250 cases. 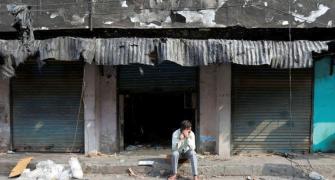 'Delhi riots could have been averted if FB had acted'