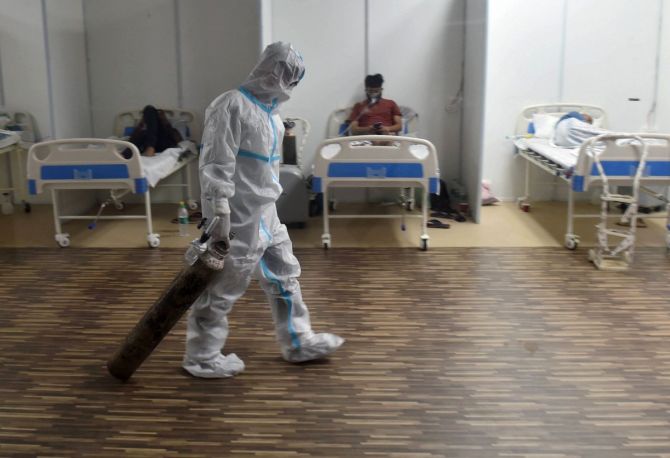 At least four COVID-19 patients died at a private hospital here in Maharashtra on Monday with their family members alleging the shortage of medical oxygen as the cause.

However, the hospital management has said the deceased patients were in critical condition.

Maharashtra minister and NCP MLA Jitendra Awhad said the state government has constituted a committee to probe the death of the four patients at the hospital.

"The state government has directed Bhiwandi Nizampur Municipal Corporation (BNMC) commissioner Pankaj Ashiya to probe the incident and submit a report," he told reporters after visiting the hospital.

When asked about the probable cause behind the death of the four patients, Awhad said 35 patients were admitted in the ICU of the hospital and had a disruption in oxygen supply been the cause it would have affected all the patients and not only four of them.

Meanwhile, kin of the deceased created a ruckus at the entrance of the hospital alleging that the shortage of oxygen killed the four patients.

The situation was brought under control by police personnel who rushed to the spot.

BJP leader and former MP Kirit Somaiya tweeted that six patients have died at the hospital due to a defect in the oxygen supply.

"Every life is important to us. Chief Minister Uddhav Thackeray has taken the incident seriously," he told reporters outside the hospital.

"The committee has been directed to file its report today itself," he said, adding the probe will cover various aspects of the incident.

Shinde said the hospital management has informed him that the four patients, who died earlier in the day, were already in critical condition.

When asked about the shortage of medical oxygen in Thane district, Shinde said the shortage is everywhere in Maharashtra.

"The state government is making all possible efforts to tide over the shortage by procuring medical oxygen from other states and oxygen-filling facilities via train, flight etc," he added.

He stated the four patients died due to the shortage of oxygen.