News
Business
Movies
Sports
Cricket
Get Ahead
Money Tips
Shopping
Sign in  |  Create a Rediffmail account
Rediff.com  » News » 'India woke up to this threat long before the US did'

'It is vital we should form an international coalition against ISIS, because their brutality and the use of the Internet for jihadist activities is a reminder that the entire world community has to be in this together,' US Congressman Ed Royce, chairman of the House Foreign Affairs Committee, tells Aziz Haniffa/Rediff.com in an exclusive interview ahead of Prime Minister Modi's visit. 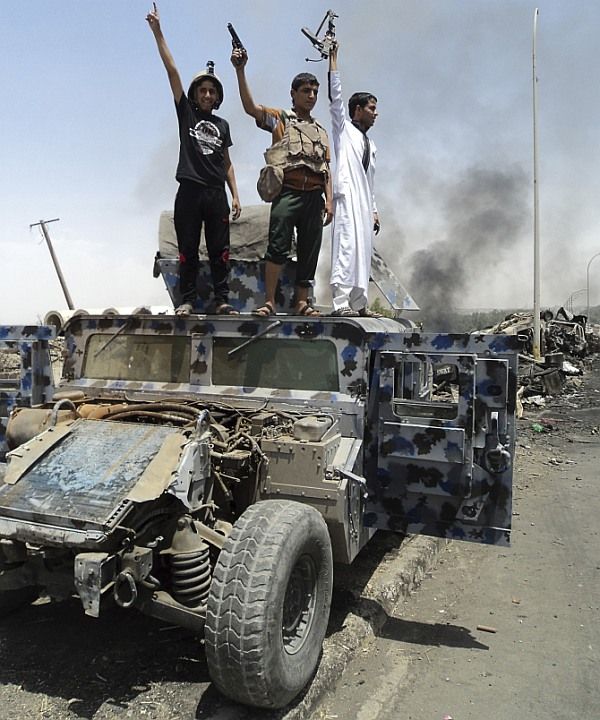 United States Representative Ed Royce, chairman of the influential House Foreign Affairs Committee, believes Prime Minister Narendra Modi has "reinvigorated" the US-India partnership from the malaise that had set in over the past few years.

The Republican legislator from California was to meet with Modi on arrival and attend his Madison Square Garden event, and also meet with the prime minister later along with the Congressional leadership.

How significant is Prime Minister Modi's visit to the US, particularly in moving the relationship forward?

It is not an overstatement to say that the US-India partnership will define South Asian affairs for years to come.

For over two decades, our partnership has seen diplomatic growth, and I was pleased to play a part of that, joining (then) President Clinton's 2000 trip and helping to lift the ill-conceived sanctions against India in 2001.

The prime minister's visit to New York and Washington will be an important trip in laying the groundwork for furthering both economic ties and counter-terrorism cooperation. It is no exaggeration to say that his visit will lay the framework for a historical deepening of the relationship between our two great democracies.

Are you confident it could indeed be a new beginning despite the bitterness still prevailing in some Indian and Indian-American circles over his humiliation of being banned from coming to the US till he overwhelmingly won the general election in a massive landslide?

As a consequence, that is why I publicly urged that he be invited to the US and I, as chairman of the Foreign Affairs Committee, was inviting him to the US. I feel very strongly on that and I believe so does the Indian-American community.

You were the first lawmaker to write to Speaker John Boehner urging him to invite Modi to address a joint session of Congress. Are you disappointed that Boehner couldn't make the address happen? 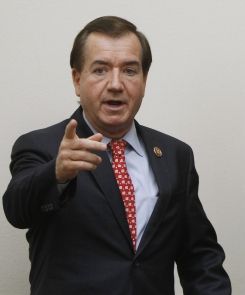 I was pleased to join my colleague George Holding -- and yes, I was the first to write the letter -- and I asked George, who was one of my subordinates in the committee, to join me in doing so -- inviting Modi to be granted this honour.

The reason it did not occur is because the Senate is going to be out of session and so is the House of Representatives. They are not in session and instead, I am having a meeting along with the Speaker of the House and other leaders in Congress with the prime minister when he is here in our nation's capital. We are all coming back to DC for that.

When you meet with the prime minister, what are some of the issues you would like to bring up?

First, I am going to remind him that I traveled to Gujarat following the devastating 2001 earthquake and had the opportunity to meet him, and that, as I've said, his reconstruction effort was astonishing.

I am also going to explain to him our appreciation for the reform he made in his home state of Gujarat that now accounts for 25 per cent of all Indian exports, even though it is only 5 percent of the country's population.

I am going to urge him to continue his leadership in reforms in Delhi so that the whole country of India has sustained performance and results that Gujarat has had.

I am going to offer our cooperation in the US to try to make certain that it is India on the map for trade and investment for US businesses because the results there are much better than the results we have seen in mainland China.

We are seeing astonishing opportunities, but should be selling Liquefied Natural Gas to India in order to fuel its economic growth, and I am going to further cooperate with the government and extend my hand in friendship to say that we've been working hard on this issue, but together I believe we can get legislation through to make certain that India is the recipient of the excess LNG.

We are capping wells in the US, we are layering gas because of our surplus, and that surplus should be sent to India.

I am going to lastly mention the importance of counter-terrorism cooperation because I have seen firsthand having stayed -- my wife and I stayed in the Taj and I went back there right after it was hit by terrorists -- and this is an opportunity for us to be reminded that besides the naval to naval exchanges that we are doing that is so important in the Indian Ocean, we must also ramp up, step up, now that Al Qaeda says it is going to form an affiliate in the subcontinent -- in India.

So, we need to be active in mutual cooperation.

Are you disappointed that the nuclear deal -- the debate on the legislation that you directed on behalf of the Republicans -- signed over six years ago is still to be implemented because India has made it clear it will not compromise on the Nuclear Liability Act that was passed in Parliament?

India has signed the convention and is yet to implement it -- the convention's provisions -- especially with regard to the focus on the operator's liability, and that is where the liability should lie.

But I am hopeful that over time we can resolve the conflict of interpretation and this is just going to take hard work between the two governments.

US business is peeved because it put in a lot of work to push through the deal hiring lobbying firms and so on, and now feel betrayed because India is signing deals with Japan and a whole host of other countries.

Yes, there is no denying that there is deep concern in the business community, but for many years the Indian Parliament has been factionalised and now, this is the first time that there is a solid majority in Parliament and I believe there is the possibility to negotiate a solution.

So many factions existed in Parliament that until the Bharatiya Janata Party got this overwhelming majority, it was very difficult for the leadership to be exerted in order to seal a deal on as number of issues.

But now, on any number of issues, with a convincing majority in control in Parliament, it is possible to have the prime minister's will and leadership he reflected in support from the political party which controls Parliament.

So, it is a possibility on a number of different issues that are impediments to further economic ties to move forward -- on issues such as trade liberalisation, on the civilian nuclear agreement.

In many cases, the Indian-American business community is a bridge that has to deal with a lot of the bureaucracy. So, there is the tremendous opportunity going forward to also cut a lot of the red tape and to liberalise the rules so that we can see more direct foreign investment in India.

And, the other aspect of it is the growing reality that many contracts with Beijing are being severed -- that the rule of law is not being followed in Beijing. The new studies from FICCI (the Federation of Indian Chambers of Commerce and Industry) and what we've been seeing from The Wall Street Journal show the return on investment in South Asia.

So, if we can hold up India with its new leadership as a magnet for US investment, we can do much to increase the bonds of economic ties, and how important they will be especially for trading centres such as New York and California for our ports and our vibrant Indian-American business communities that have played such a major role in this economic growth.

You have been a driving force in pushing for trade and investment between the US and India and the relaxing of some of the draconian regulations by Delhi. What are the deliverables you would like to see initialed during the Obama-Modi summit? Would you like to see a signing of at least a Bilateral Investment Treaty?

Yes. It is high time that we took that step. I believe that will work and it also could be a catalyst in US-South Asia trade and investment.

And I believe with the vision that the prime minister has, we can not only see how India could play such a role, where India can lead in further liberalising trade across South Asia and that's another area where we have the possibility of reform.

I know the Indian government has concerns with reforms in the agricultural sector, but it is important that this issue gets resolved quickly.

I am optimistic that the Modi remains committed to economic reforms and increasing jobs in the United States. I know he does because of his conversations and statements on this issue.

I also think that the US should end its subsidisation in the agricultural sector. So, there are things we can also do on the US side, which I can push for, which will help it be more conducive for the economic expansion of liberalised trade with India.

You have been a longtime supporter of increased coordination between the US and India on counter-terrorism cooperation, intelligence sharing, etc. Senator John McCain in a major speech at Carnegie said, 'Imagine the signal India would send if it joined the emerging international coalition to confront ISIS.'

Do you agree with McCain and do you believe it is incumbent on India to join such a coalition to fight this scourge?

I believe it is vital and we should form an international coalition against ISIS, because their brutality and the use of the Internet for jihadist activities is a reminder that the entire world community has to be in this together.

We need cooperation on terror finance between the US and India. Frankly, we need that cooperation with Russia, with the capitals of Europe as well as with the Gulf States, so that we can choke off the hard currency that fund and fuel these incubators of terrorism.

I would strongly forge such cooperation, and as we have watched India step up its counter-terrorism efforts, we see India taking on its responsibility regionally and internationally in combating terrorism, it is absolutely true that India woke up to this threat long before the US did. 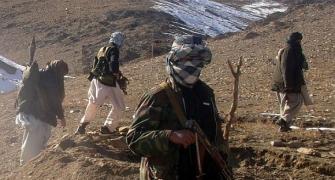 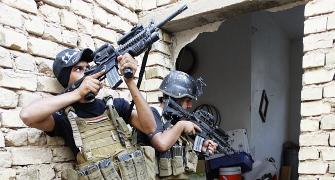 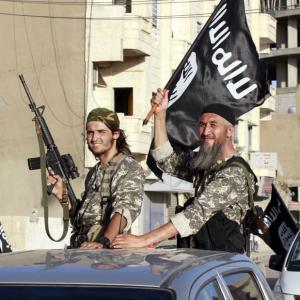 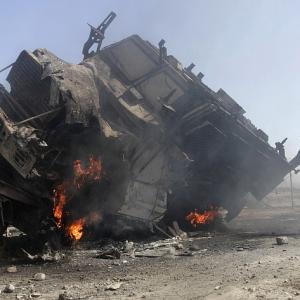