'The India-France relationship has been that of the elites of two countries, who appreciate each other's philosophical traditions -- whether it is ancient Indian civilisation and Sanskrit texts or the French tradition of Rene Descartes, Albert Camus, (Jean-Paul) Sartre... This is a drawback. It doesn't create the buzz, the excitement necessary for a relationship. We need more people-to-people contact, especially among students,' says former Ambassador to Paris, Rakesh Sood.

With French President François Hollande in India as chief guest at the Republic Day Parade, all eyes on the long-pending Rafale deal between the two nations.

Rakesh Sood, India's ambassador to France from 2011-13, tells Archis Mohan why the French are looking at India to understand how to deal with its minorities and de-radicalise its youth.

What is the current state of play in India-France relations?

Let me first talk about the uniqueness of India-France relations. The most important aspect is cultural affinity. Indians and French have common characteristics. Intellectual arrogance -- "don't come and teach us, we are unique" -- is something both the Indians and the French possess. We are both argumentative people. We love debating things.

The third characteristic is fierce individualism. The French have maintained their autonomy, which is also something that we (Indians) have tried to do.

How does it translate into foreign policy? After World War II, the French were never comfortable with the United States dominating the world order. This was unlike the United Kingdom, which found its power much diminished and played second fiddle to the US. The British gave away their strategic interests in the Gulf and West Asia to the US when they couldn't afford to maintain these. The French never did that. They retained their little pockets of influence, particularly in Africa which had a large number of French colonies.

The French have never been comfortable with the US-led and British-helped Anglo-Saxon world order. They were the only country to openly oppose the US invasion of Iraq.

After the Cold War, the French worked towards shaping a multi-polar world order. They have been highly supportive of India's role in the region and its strategic autonomy. In the aftermath of the Pokhran nuclear tests of May 1998, (then National Security Advisor) Brajesh Mishra and I went to France. We were told that none other than French President Jacques Chirac would receive us. Mind you, Mishra and I travelled to Paris even before the end of May. We met Chirac. He listened to what we had to say carefully and appointed senior diplomat Gerard Errera as his special representative for the strategic dialogue with India.

We didn't have to do any convincing about why we did the nuclear test. We articulated our perception and regional worldview. The French shared their perception and concerns. That was the key to India-France strategic dialogue -- and it was a strategic dialogue in the real sense, which involved four to five components, each with lots of content, more than what India had at the time with any other country.

Can you elaborate on the cooperation between India and France in the areas of nuclear energy, space and defence?

Nuclear energy was a major sector of cooperation. The first discussions were between Areva (French multinational company and global leader in nuclear energy) and the Nuclear Power Corporation of India Limited. When the US cut off fuel supply to Tarapur nuclear power plant in 1982, the French stepped in to provide us with enriched uranium. France and India are really the only two countries that were interested in the fast breeder reactor technology. The two countries have also worked together on thermonuclear power projects.

India and France have had a long-standing cooperation in the space sector. When we started the Indian Space Research Organisation our sounding rockets were French. All our satellites that weigh two tonnes and above have been launched by Arianespace (French multinational company and commercial launch service provider). The French, in turn, use our PSLV (Polar Satellite Launch Vehicle) to launch their smaller satellites. We are also doing joint fabrication of satellites. It's a solid relationship of equals in the space sector.

On the defence side, our air force has had the longest of linkages with France. The French Alouette helicopters were used by the Indian Air Force and made in India by Hindustan Aeronautics Limited as Chetak; the IAF flew the French fighter jets Ouragan, named Toofani, in the 1950s and 1960s. Then the Mirages, the Jaguars. Now discussions are on for Rafale jets. India and France are jointly building submarines at the Mazagaon docks. Cooperation in the fields of counterterrorism and cyber security have been added.

What are the likely deliverables during Hollande's visit to India?

The Rafale deal will go through. Accompanying the Rafale deal is the 50 per cent offset clause. Dassault (the manufacturer of Rafale) will have to invest much more in India to support related industries. The French TGV or Train a Grande Vitesse, that is, high-speed train, which runs at 300 to 320 km per hour and has been used across Europe, could be another sector of cooperation.

The third sector could be smart cities. The French have been one of the most efficient in building cities. There is likely to be India-France cooperation in developing Chandigarh, Puducherry and Nagpur as smart cities. The solar energy sector is an area for close cooperation. Prime Minister Narendra Modi had launched the International Solar Alliance when he was in Paris for the climate change talks last December.

What about economic and commercial cooperation?

The economic and commercial relationship has not picked up. India-France bilateral trade, excluding the defence sector, is worth only $10 billion. Language has been bit of a hurdle. But it shouldn't be. Around 2,500 students from India go to France every year to pursue higher education. Increasingly, given the cooperation across sectors, there will be the need to hire people, who know both French and Indian systems and languages. It is a good time to send a large number of Indian students to France. The Chinese send about 25,000 students a year to France. However, the French still do not grant long-term visas, while students like to work for two-three years. These issues need to be resolved.

The India-France relationship has been that of the elites of two countries, who appreciate each other's philosophical traditions -- whether it is ancient Indian civilisation and Sanskrit texts or the French tradition of Rene Descartes, Albert Camus, (Jean-Paul) Sartre... This is a drawback. It doesn't create the buzz, the excitement necessary for a relationship. We need more people-to-people contact, especially among students.

What are France's geo-strategic concerns in the AfPak region? How effective an ally is India against the backdrop of the terror attacks in France last year?

There is a solid strategic basis to where India fits into the French geo-strategic vision. What imparts balance to India-France ties is that it's a relationship of equals.

As much as 10 per cent of the 60-million population of France is Muslim, largely from the French old colonies in Africa. The French have always prided themselves on their approach to secularism, which is different from the "melting pot" approach of the UK where migrant communities congregate in specific areas like Southall.

In France, religion is strictly the private affair of an individual. There has been a strict separation between the Church and the State for over a century now. The French have pursued a policy of assimilation. Whatever their colour or religion, as long as migrants speak French and adopt the French way of life, they will be integrated into French society. That is why France is introspecting why despite its best efforts to integrate minority youth, they have become radicalised.

The French are also quite clear that we, in India, have dealt better with radicalisation and want to learn from us.

Some of their youth, including those involved in the terror attacks, had been to the AfPak region. France cannot ban its people from travelling to that region, but it does wish to have our understanding of that region. The French are also strong votaries of individual rights and freedoms and want to learn from us about how to enforce laws without affecting the basic values of "equality, liberty, fraternity" of French society.

Its presence there doesn't create nervousness. There is scope for cooperation in oceanography and strengthening of the maritime relationship. 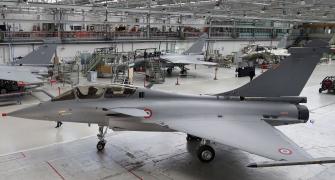 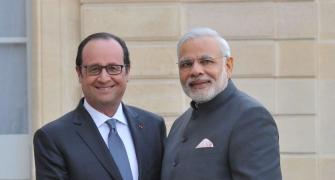 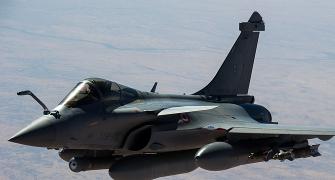