'He is not acting solo.'
'The plot may have people within the Congress and outside.' 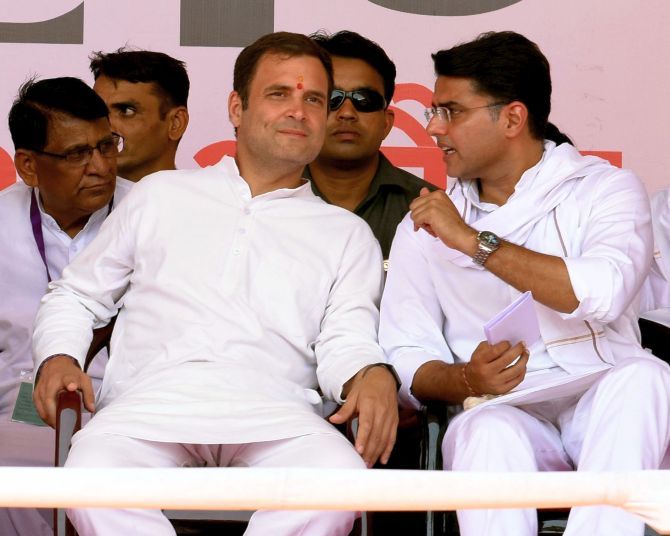 First Jyotiraditya Scindia in Madhya Pradesh and now Sachin Pilot in Rajasthan. It seems that the Congress under Sonia-Rahul-Priyanka Gandhi can't keep its flock together.

What next for the Congress after Pilot's rebellion?

"Sachin's rebellion is timed when the 87th president of the Indian National Congress (Rahul Gandhi) is reportedly trying to stage a comeback," Rasheed Kidwai -- a Visiting Fellow at the Observer Research Foundation and the author of two books on the Congress party: 24 Akbar Road and Sonia-A Biography -- tells Syed Firdaus Ashraf/Rediff.com in the second of a three-part interview:

Sachin Pilot was humiliated by Ashok Gehlot after the police summoned him for questioning in the plot to destabilise the Rajasthan government. Why did Ashok Gehlot do that?

There were faultlines on both sides.

The chief minister thinks that he is first among equals. And if he is chief minister, then the entire state is his fiefdom and they are not large-hearted.

This leads to some kind of unease and tussle and at one level both are at fault.

Also, the deputy chief minister is not recognised by the Constitution of India and it is just a minister's post with another name.

Just look at how Keshav Prasad Maurya is treated in Uttar Pradesh, he is also deputy chief minister of the state and the BJP state president.

But what I am saying is that if you see each individual, they have a history of patience, sacrifice and struggle.

Leaving the Congress did not help Sharad Pawar as he walked out of the party on Sonia's foreign origin issue.

Had he not done that, he would have been a prime ministerial candidate.

The Congress has split, in my rough calculations, about 48 times and only a handful of names you mention have survived.

The late V N Gadgilji (who served as a minister and Congress general secretary) used to tell me that they (party rebels ) used to go out of the Congress like lions and came back as lambs.

Even Sharad Pawar had come back to the Congress (in 1986 after leaving the party in 1979). Madhavrao Scindia came back, Arjun Singh came back.

Some of them did not come back, like Jagan who is a success story in Andhra state, but then there were other dynamics like the Congress's move to bifurcate Andhra Pradesh.

Sachin Pilot has not quit the Congress, but decided to stay back in the party. He preferred to be in the party though he has been sidelined now.

Pilot is a cautious, but ambitious, man.

I think there is a far bigger plot where Pilot is a player. He is not acting solo. The plot may have people within the Congress and outside.

You hinted about this in one of your tweets and gave a deadline stating if Sachin Pilot does not leave the Congress by August 10, it will mark the beginning of a fascinating protracted battle from within.

On August 10, 2019, Sonia Gandhi took over as interim president of the Congress party. Recently, she has been hinting that she wants to hand over power and quit.

As she is completing a year, therefore Hardik Patel was appointed Gujarat party chief before her term gets over.

Sachin's rebellion is timed when the 87th president of the Indian National Congress (Rahul Gandhi) is reportedly trying to stage a comeback.

Is Pilot going through some kind of challenge internally or outside?