'A deadly combination of money and religion lures them into the murky world of terrorism.'
'You will reach heaven if you kill -- what a doctrine!' Professor Ajoy Roy, whose son blogger Avijit Roy was brutally murdered in Dhaka last year, tells Rediff.com's Indrani Roy. 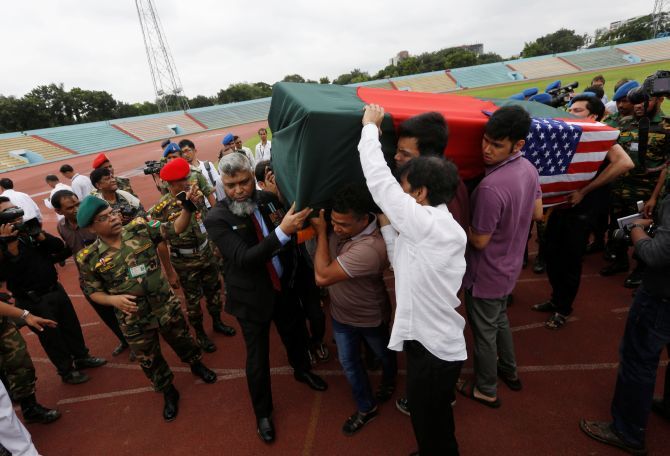 IMAGE: Relatives carry the coffin of a victim killed in the attack on the Holey Artisan Bakery and the O'Kitchen restaurant, after a memorial ceremony, in Dhaka. Photograph: Adnan Abidi/Reuters

"Despite the violence, bloodshed and carnage, all is not lost in Bangladesh. It will rise above the present crisis and counter terrorism of every form," Professor Ajoy Roy, slain Bangladeshi American blogger Avijit Roy's father, told Rediff.com's Indrani Roy, over the telephone from Dhaka late on Monday evening.

If terrorism has been raising its ugly head in Bangladesh over the last few years, Professor Roy, below, left, felt a counter-terrorism force too has been gaining strength.

"And over the years, it will be strong enough to fight against such carnage," he hopes.

You fought for the independence of this country. There is so much bloodshed here now.

It hurts. It hurts a lot. It feels as if someone's thrashing my mother.

But every bad thing has to pass.

This phase too won't last.

I am pretty sure about it.

Do you think the terrorists who attacked the Holey Artisan Bakery had links with Islamic State?

Yes. Not only Islamic State, I am sure they had links with the homegrown Jamaat Ul Mujahideen, the Students Islamic Movement of India and also with Ansarullah Bangla, the Bangladesh wing of Al Qaeda.

Without these connections, it would not have been possible for such a small group to enter a high security zone like Gulshan.

Also, the ruthlessness of the attack indicates the undeniable ties with IS.

Why do the Bangladesh government and its police insist that IS does not exist there?

It is because our government fears that the US will launch air strikes if it comes to know of the presence of IS in Bangladesh.

How long can one deny the truth?

It's high time our government rose to the occasion and accepted the bitter truth.

We came to know from the media that the terrorists who attacked the cafe belonged to wealthy families and studied in prestigious institutes. What could be the motivation for these 'bright young minds' to kill?

I think it's a deadly combination of money and religion that lures them into the murky world of terrorism.

Various terrorist groups strewn across the world look for vulnerable souls who can be easily manipulated and brainwashed in the name of religion.

Once they hit their targets, they start sowing the seeds of violence in their brains using religion as the main ingredient.

'You will reach heaven if you kill' -- what a doctrine!

During an earlier interview, you told me that various non-government organisations send funds to militant outfits in Bangladesh. Why has the government failed to stop these suspicious organisations till date?

I think the government agencies simply lack in necessary skills.

The work of government intelligence too falls far short of our expectations.

How come intelligence never got wind of such a conspiracy?

Moreover, various wings of the state administration like the Border Guard Bangladesh, Rapid Action Battalion, Bangladesh Police have failed the government to a great extent.

Government officials have to sit together now and come up with a speedy solution.

Too many lives have been lost.

It's the government’s responsibility to provide safety and security to its people.

Are you satisfied with the way your government handled the crisis?

Also, I feel the crisis could have been handled by the police forces alone.

But the government had to take the help of army, air and naval commandoes.

Do you fear Bangladesh will see more terror attacks in future?

Yes. And unless our government takes some concrete and foolproof steps to brush up our security forces, my country is going to be ravaged over and over again.

In recent times, many bloggers, publishers, priests have got killed. Have these incidents marred the country's communal harmony in any way?

Fortunately, no! Most of Bangladeshi Muslims are simple, God-fearing people, who believe in Sufism.

They are compassionate towards the Hindus here and vice versa.

Therefore, communal unity does not get easily shaken.

The Muslims and Hindus that I know have condemned the Gulshan cafe incident. 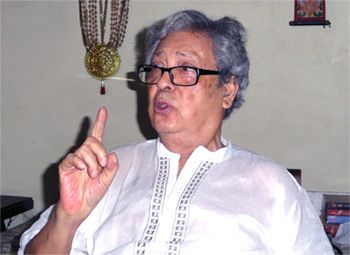 No. Courage has always been my strongest virtue.

I lost my son at the hands of the fanatics.

What do I care for now?

Since Avijit's death, the Bangladesh government provides me with ministerial-level security.

The other day a friend of mine said, 'Bangladesh is gradually becoming uninhabitable.' What do you have to say to this?

Be rest assured, all is not lost.

My country is going through a rough patch now.

But every crisis gives birth to something good.

Just as the fanatics are raising their ugly heads in Bangladesh at present, I am witnessing the rise of a group of sane, logical and carefree youth who can put everything at stake to establish peace and harmony.

The Shahbag movement that had started in 2013 has now penetrated various districts and villages of Bangladesh.

Youth from the remotest corners of the country are joining the movement to stand against the divisive forces.

These young people have only one motto -- to protect the integrity of our country.

Do you think the Gulshan cafe incident will affect India-Bangladesh ties?

No. Militants can only kill human beings, they cannot kill an ideology.

Indo-Bangladesh friendship has a long history.

And no incident, however big, can affect that.

Some fanatics killed my son.

But they could not smother the cause that he dedicated his life for.

The terrorists are equipped with many powerful arms, but they fall flat against the strength of humanity.