News
Business
Movies
Sports
Cricket
Get Ahead
Money Tips
Shopping
Sign in  |  Create a Rediffmail account
Rediff.com  » News » 'BJP's wish of being the only party not possible'

'A one-party State is not possible in a diverse country like India.' 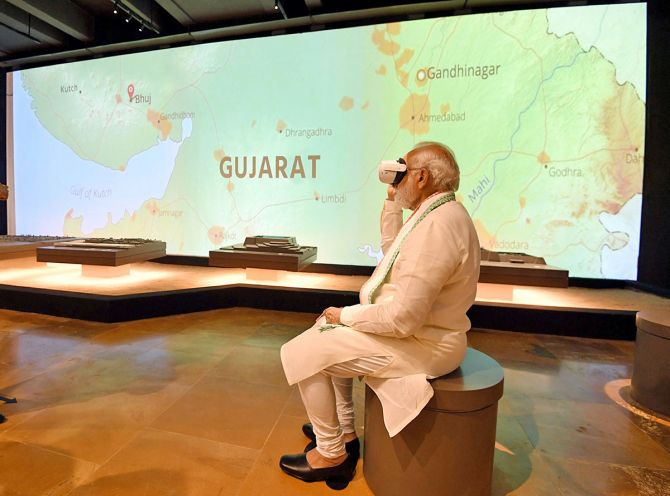 "The BJP's wish that it will be the only party in India and there will be no regional, dynastic parties is grossly misplaced. This is not possible in a diverse country like India," says Dr Rajiv Kumar, head of the department of politics, Mahatma Gandhi Central University in Motihari, Bihar.

"The newly formed Janata Dal-United and Rashtriya Janata Dal government will not pose any threat to the BJP at the Centre."

"Nitish Kumar is not an alternative to Modi," Dr Kumar tells Rediff.com's Archana Masih in a two-part interview.

You had anticipated, in fact, predicted the re-reunion of the JD-U and RJD in Bihar at the time of the state assembly election.
Why? Do you see them as natural partners because of their background in Mandal politics?

The reunion of the JD-U and RJD was expected during the assembly elections itself. Let us go into some background to understand the reasons for the coming together of both the parties yet again.

The JD-U's seats came down from 71 in 2015 to 43 in 2020. Chirag Paswan's LJP (Lok Janshakti Party) contested from all seats against the JD-U and was responsible for the latter's poor performance.

One fear factor in the minds of the public was the memory of the breakdown in law and order during Lalu Yadav's time. But if you analyse the election at that time, the mood of the people was neither for Nitish Kumar nor the BJP. The mood, especially of the youngsters, was tilted towards Tejashwi Yadav.

The expectation was that Nitish should align with Tejashwi. It could not happen then, but it has happened now because it was a natural and expected alliance.

How will this Grand Alliance be different from the previous one?

New factors have emerged and people are talking about the 2024 general election and the 2025 Bihar assembly election.

There is an emerging leadership in Bihar. That is why people like Prashant Kishor and Sachidanand Rai from Saran -- who left the BJP and won as an independent member of the legislative council in 2022 -- are trying to fill this gap.

Youngsters hope Tejashwi will provide jobs as he promised during his 2020 campaign. Now that he is deputy chief minister, he has a chance to prove it.

Therefore, these two years are going to be very crucial for Tejashwi. If he delivers on government jobs, maintains law and order and counters the media and perception attack -- then he may have a chance in the next election. How will Nitish who is known as an able administrator deal with ministers like Tej Pratap Yadav and others who could lead to a strain within the alliance and provide ammunition to the BJP to attack the government?

We should not see the perceptions of the past, we should look to the future. The performance of every party on law and order is the same. It is about perception and how a particular government is projected.

The Opposition will say that crime is increasing. It is a war of perception in the era of social media.

Nitish is a good in administration and Tejashwi is a young aspirant. Both will want to exploit these two years so that they can prove that they can deliver what they promised.

The advantage that Tejashwi has is that he has the option of delivering some of his poll promises and saying that he will fulfill the rest when he has full majority.

One of the issues people were not happy with was Nitish government's handling of Covid and now they are unhappy with BJP's Agniveer policy. The young are losing hope because there are no industries in Bihar and people want jobs in the government and in the armed forces.

Even the BJP has no leadership and does not have a chief ministerial face in the state. There is a leadership gap and hence these two years are going to be extremely crucial. 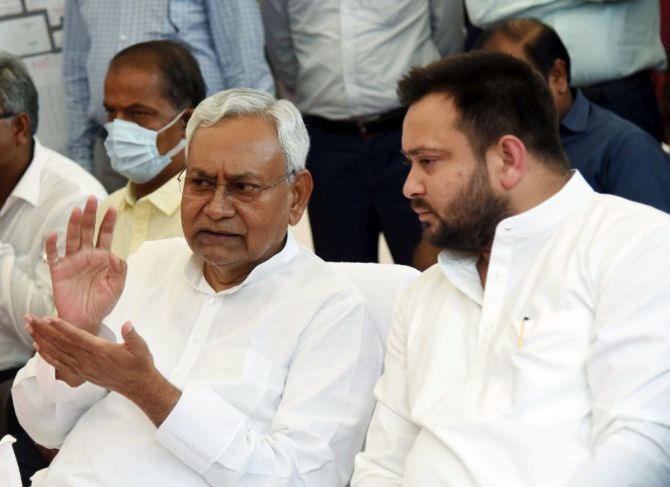 What does the RJD-JD-U government need to do in these two years if it has to give a challenge to the BJP. Do you think it will be able stay the course till the 2024 General Election?

Nitish has the advantage of running a good administration, improving law and order and developing infrastructure.

Tejashwi has to control his ministers, delivering on employment and ensuring that law and order does not decline.

This alliance will not have a problem of survivability because compulsions have brought them together and both have a common opponent. A lot will depend on their performance.

However, this government will not pose any threat to the BJP at the Centre. Nitish Kumar is not an alternative to Modi. He does not have national appeal and should remain in Bihar.

He can be selected as a candidate if the Opposition parties come together in the 2024 election, but I don't think Nitish Kumar is a match for Modi. Is 'Operation Lotus' a possibility in Bihar before the Lok Sabha or assembly election? What political games do you see happening in the months ahead?

The language and play of politics is autonomous. It is a power game and cannot be judged by moral grounds. The BJP wants to expand in the south and all over India. They will attack the opposition on issues like corruption and dynastic politics.

Their campaign has started showing results if you see the upheavals in the Congress. Some opposition leaders in the states are performing well -- in Odisha, Telangana, West Bengal, Tamil Nadu etc. They will fight back.

In the near future you cannot predict that the BJP will be successful in diminishing these state leaders because they are popular and have performed well.

The BJP's wish that it will be the only party in India and there will be no regional, dynastic parties is grossly misplaced. A one-party State is not possible in a diverse country like India.

One must keep into account that BJP lost 57 seats in the last assembly election compared to 2015. It may not have been possible for Yogi to get a second term if it had not been for free ration scheme and manipulation of Jat votes by Amit Shah. Last minute manipulations helped the BJP perform well.

Modi's popularity was down to 40% in 2021 compared to 2020 which was just six months after the general election, but military action in Balakot helped BJP get majority in 2019. 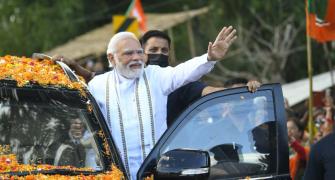 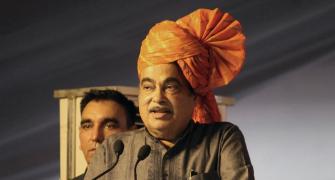 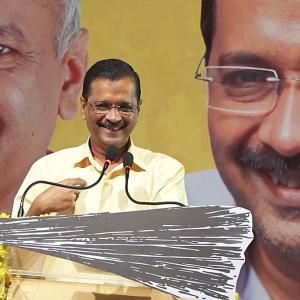