'Sachin Pilot should be credited with the revival of the Congress and for building it into a fighting machinery.'
'What goes in favour of Ashok Gehlot is his experience, connect and relationships -- in and outside the Congress.' "The major change that has happened is that the Congress is also getting votes from the upper castes and continues to get a good share of SC/ST and Muslims votes."

You wrote that Ashok Gehlot would be more useful to the Congress in Rajasthan in view of the 2019 Lok Sabha election? Why?

By virtue of his familiarity with the state and its political forces, he could manage to form the government when the Congress did not have a clear majority in 2008 and was short by 5 MLAs.

Mr Gehlot has been very rooted in Rajasthan and has been in state politics for more than four decades. He knows the state and the leadership like the back of his palm.

He has relationships in and outside the Congress party.

There are quite a few similarities between the mandate of that time and this one.

In 2008 because of his relationships, all the BSP (Bahujan Samaj Party) legislators had joined the Congress; Congress rebels also rejoined the party and they managed a comfortable majority despite getting only 96 seats.

If a similar situation were to arise, Mr Gehlot would have been a better choice.

Who in your opinion is better suited in the present situation? Sachin Pilot has pulled the party out of its 2013 debacle in the state.

The manner in which Mr Pilot has worked in the last four-and-a-half years since he became Congress chief after its debacle in 2013, he has brought the party to a fighting machinery. It is in better shape organisationally also.

He should be credited with the revival of the party. The Congress has always been afflicted with factionalism in the last two decades and he has kept the house together.

What goes in favour of Mr Gehlot is his experience. He has twice been chief minister, was PCC (Pradesh Congress Committee) chief, and an MP for a long time from Jodhpur.

In terms of connect with the people, Mr Gehlot scores above any other leader in Rajasthan and that gives him an edge.

The Congress was expected to do better in Rajasthan. Why did it fail to do so?

I felt the organisational initiative was somehow lacking which was reflected in our data. In spite of strong widespread dissatisfaction all over the state it was not translated into votes.

That's why the general expectation was that the Congress would get 120+. The selection of candidates, manifesto, organisational effort, cues to campaign has to be decided ahead of the election which did not seem to have happened.

There is a wafer thin difference in vote share between the Congress and BJP. What went into bolstering the BJP's position as the campaign progressed?

Having recovered from that point to where the Congress has improved from 33% to 39% and BJP has come down from 48% to 38% explains the verdict.

The tide has turned the Congress way in a big manner, but we were expecting a still healthier mandate for the Congress.

Rajasthan, Madhya Pradesh and Chhattisgarh accounted for 21% of the BJP's vote share in 2014 -- how could this result impact the party in 2019?

It will have a positive impact on the fortunes of the Congress. The BJP won all the seats in Rajasthan and almost all seats in MP, Chhattisgarh.

Even before the 2018 assembly results came the feeling was that the BJP cannot repeat 2014. The level that they reached in 2014 was the ultimate.

In early 2018, the BJP lost the by-elections in Ajmer and Alwar in Rajasthan.

With the 2018 Vidhan Sabha mandate, there will be a substantive decline in the BJP's seat share in the 2019 Lok Sabha.

This has been the trend in all elections since 1998 because there is hardly a 4 or 5 month gap between the Vidhan Sabha and Lok Sabha (elections). The established trend is that whoever wins the Vidhan Sabha wins most seats in the Lok Sabha.

Over a third of the BJP's losses have been in SC/ST (schedule caste/schedule tribe reserved) seats. In Rajasthan of 34 SC seats, the BJP won 14 when it won 32 in 2013.

I will have to look at the data more closely. We can't infer from the mandate that the BJP has lost out among the SCs and STs in Rajasthan.

In south Rajasthan, predominantly a tribal region, the BJP has done reasonably well.

Similarly in south east Rajasthan, in the Kota and Udaipur divisions, the BJP has done much better compared to the other five divisions in the state.

Amongst the reserved and non reserved category, the non reserved vote was more in favour of the BJP. But this time inferring from the voting pattern, more urban seats and votes have gone to the Congress.

My survey clearly shows that the forward communities, upper castes like Rajputs and Brahmins that usually voted for the BJP did not. There can be a number of reasons for that -- dissatisfaction amongst Rajputs, demonetisation, GST... the trading community has not voted for BJP in a big way.

In most of these seats the voter turnout has also come down in urban Rajasthan.

The BJP has suffered not because the SC/STs have not voted for them, they have. But it is the non reserved community whose support has come down.

And gone to the Congress?

Either to the Congress, or NOTA, or have not voted at all.

Rahul Gandhi has promised waiving farmers's loans within 10 days. How will this impact the fiscal situation of the state and can this happen?

I personally feel it will be some kind of package, a broader policy framework which does include loan waiver, but also minimum support price, crop insurance, irrigation, electricity. Only by waiving the loan the discontent of the farmer is not going to go away.

Will this outcome temper the BJP's Hindutva rhetoric and Yogi Adityanath kind of electioneering?

One has to understand the basic socio-cultural milieu of Rajasthan. It is a very inclusive and plural society compared to other states of the Hindi heartland.

Its history is also different. In the colonial period, the British directly controlled the neighbouring states, but in Rajasthan it was the royal houses.

The divide and rule policy that the British used in other parts did not happen in Rajasthan. The royal houses were always secular and plural in outlook and because of that character they still have a respect in a democratic set-up.

The BJP leaders who could become successful like Bhairon Singh Shekhawat and Vasundhara Raje have been more secular and inclusive in their policy outlook and political life.

That's why the kind of rhetoric and excessive doses of Hindutva that other people from outside want to come and inject in Rajasthan is not going to be successful.

There have been news items about the tussle between the saffron brigade and the chief minister.

What about the incidents of lynchings and cow-related violence in the state?

The chief minister denounced that and said it was a murder and a law and order problem. She very vocally said that. The kind of politics that Adityanath is trying to inject is not going to be successful in Rajasthan.

Mr Modi tried to avoid this and was focusing on development in his campaign.

The Congress also entered the religious space which used to be a BJP domain. How will this encroaching of the BJP's space affect both parties?

I don't subscribe to the view that by Rahul Gandhi visiting temples and making gaushalas he is encroaching into the BJP's religious space.

The Congress has become cautious about how it projects itself in the public domain. If educated people are getting the impression that the Congress is playing soft Hindutva, the onus is on the Congress to clear this perception.

In terms of the logical reasons to keep stray cows away from roads that can cause accidents, there are good social economic reasons for the state to intervene in this area to ensure that cows are well protected.

The argument is that looking after the cow is not the sole monopoly of certain sections of society. It is a cultural practice in this country for years.

Is the Congress is on the path of revival?

Yes. The skewed social support base of the Congress stands rectified to some extent. Earlier, it was getting most of its votes from Dalits, Adivasis, Muslims, lower OBCs.

In this election the major change that has happened is that the Congress is also getting votes from the upper castes, the Brahmins, Rajputs, trading community, Jats, farming communities and continue to get a good share of SC/ST and Muslims also.

Politically, the Congress is a more plural and inclusive group which it used to be during the 1950s-1960s when it was called a rainbow coalition of different forces.

It has an edge when talks of a mahagatbandhan take place.

What lessons are there for the BJP?

It will have to review its entire political agenda.

If they harp on the temple issue and Hindutva agenda, they must learn the lesson that it has not gelled too well with the people who are looking forward to a development agenda where parties talk about employment, social infrastructure, health, education, drinking water, irrigation.

Also, there is no second line of leadership in these three states. The BJP is a cadre-based party which needs to be led by an effective leadership. 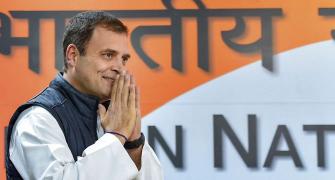