'Laws are made for every citizen to get justice.'
'If there is abuse of law, then the law will have its own course correction mechanism also.' 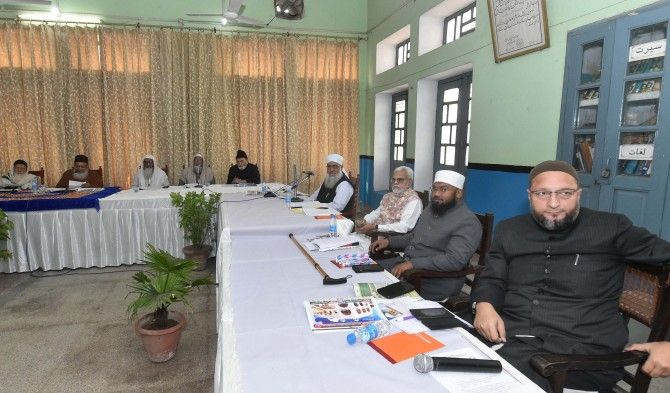 Within four months of the Supreme Court pronouncing instant triple talaq to be invalid, the Narendra D Modi government introduced the Muslim Women (Protection of Rights of Marriage) Bill 2017 in Parliament which voids the declaration talaq-e-biddat or the practice of declaring talaq in one sitting. The Lok Sabha passed the bill on Thursday, December 28, 2017.

Muslim organisations, including the All India Muslim Personal Law Board, have opposed the bill's provisions making instant talaq a cognisable and non-bailable offence, and political parties too have expressed their dismay over this.

Among the voices of support for the bill is that of Zakia Soman, founder of the Bharatiya Muslim Mahila Andolan who has been waging a long battle for gender equality in Muslim society.

It was her petition against instant triple talaq that was upheld by the Supreme Court in August 2017.

Instant triple talaq is now history after the Supreme Court judgment in August 2017. Is your organisation happy with the bill introduced by the government?

We have been calling for a law for a very long period now. This move of the government is welcome because we are entitled to a law just like all other communities, but we were denied the benefit of the law.

There is the Hindu Marriage Act, Christian Code Bill, but Muslims were denied this right.

Another is, there is a bigamy law, anti-dowry law, domestic violence law and these all are civil laws. In bigamy also there is punishment up to seven years under IPC Section 494 but it is non-cognisable.

So even in triple talaq law, it should be proportionate punishment.

(Under the talaq-e-ehsan, once a man pronounces talaq there has to be a three-month waiting period to factor in three menstrual cycles of the woman. This time is meant for reconciliation and arbitration. During this period, if cohabitation occurs, the talaq is considered to have been revoked.)

Does this bill outlaw bigamy among Muslim men?

No. Not this bill.

What are the objections to this bill, then? Why are those opposing it creating such a hue and cry?

The (Muslim) Personal Law Board has still not accepted this decision. They have not come to terms with the fact that in a democracy the government's job is to make laws.

Private laws cannot operate in a democracy. They have a problem in accepting that and it is a fundamental (problem), actually.

This bill talks about criminalising instant talaq, to which the Muslim Personal Law has objections.

There is criminalisation in women's positive law. There is punishment for dowry, domestic violence and, as I said, bigamy is punishable up to seven years, but it is not a cognisable offence.

That is why I am saying in the bill, we can make this also a non-cognisable offence.

(In the case of a non-cognisable offence, a police officer does not have the authority to make an arrest without a warrant and investigation cannot be initiated without a court order.)

Those who oppose the bill say that once the bill becomes law Muslim women can trap their husbands by falsely accusing them of pronouncing instant talaq.

These are all false bogeys. The woman can trap a man, but what about a man so badly abusing woman forever and ever?

But are such cases possible?

How? This cannot be the reason for men to abuse their position. This is not how laws are made.

Laws are made for every citizen to get justice. If there is abuse of law, then the law will have its own course correction mechanism also.

Does section 498A of IPC (cruelty) apply to Muslim marriages, too?

As such it applies to all citizens, but because this common sense that exists in our society, even in the judiciary, that if you are a Muslim you have your own something, you have to manage on your own.

This kind of ignorance is there even in the police. So Muslim women were not able to benefit from this section.

It was practised in Muslim society too, but among a very small percentage where the woman is empowered.

Otherwise, the general attitude of society was, you are Muslim and you have a different law.

The Muslim Personal Law Board says the new bill will create trouble in Muslim marriages.

That is a baseless argument. Earlier they said the abolition of instant talaq will create a problem. Any positive and good move will create problems, according to them.

This is an unsubstantiated argument and I would say this is propaganda against any reforms.

How many instant talaq cases have come up post the Supreme Court judgment in August 2017?

The government says that 67 cases came up after the judgment.

Was any punishment meted out to the men for giving instant talaq to their wives?

The judgment did not lay down any punishment and, therefore, we need a law. The judgment only made instant triple talaq invalid.