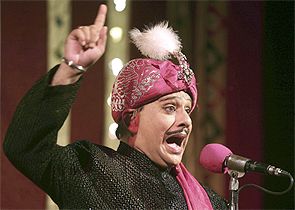 'Here I am, a BJP candidate, with a Muslim's blood running through my veins. This is simply magical!' P C Sorcar Junior, perhaps India's best-known magician, tells Rediff.com's Indrani Roy.

People have seen him mesmerising the audience with his magic.

P C Sorcar Junior has done it for years by simply waving his wand.

Considered a friend of former West Bengal chief minister Buddhadeb Bhattacharjee, Sorcar has always maintained a non-communal stance, vociferously so, both on and off stage.

When he declared his decision to fight the Lok Sabha election on a Bharatiya Janata Party ticket, it was a rude shock for his admirers.

What led Sorcar to opt for the BJP?

The magician bares his mind to Rediff.com's Indrani Roy.

You have always maintained a distance from politics. What made you join the fray?

All my life, I have been a people's man.

Though essentially apolitical, I have attended many political gatherings.

Early this year, the BJP invited me to a rally in Kolkata. There, the party leaders asked me to sit on the dais and I felt honoured. I saw a huge cut-out of Swami Vivekananda. The ambience was awesome.

Moreover, I was floored by the speeches delivered by the national president of the BJP's minority morcha Abdul Rasheed Ansari and Gujarat Chief Minister Narendra Modi.

My notion about the party stood on its head.

Thereafter, when the BJP leaders asked me to join them, I could not say no.

Don't you think your career as a magician will be affected?

For me, life is nothing, but a celebration of magic.

This part of life too I am enjoying. Till last year, I had no clue that I will be a candidate at the election.

By a series of magical coincidences, I am here. And I am going to do full justice to the circumstances.

Which political leader has inspired you the most?

I have great respect for Indira Gandhi.

Years back when I was a student, I went to a meeting in Purulia just to listen to her. She was there to inspect Purulia's drought situation. Soon, some miscreants started pelting stones.

Chaos followed and people, including a few Congress leaders, scurried for cover.

Along with a monk from the Bharat Sevasram Sangha, I stood my ground and tried to shield Indira Gandhi from the onslaught. She too did not move an inch.

After the incident, I wrote to her, apologising on behalf of the citizens of Bengal. The reply came in a few days. She thanked me for saving her.

She said she would expect me to join politics as it would be 'good for the country.'

If Indira Gandhi is your inspiration, you should have joined the Congress, right?

(Smiles) After Indira Gandhi, I could not find a single, robust 'male' in the party.

Sanjay (Gandhi) was one, but he died too soon. If he were alive, things, perhaps, could have been different.

Here in Bengal, everyone thought you were a great friend of the Leftists.

Strangely, yes. I have always maintained cordial ties with them. But that doesn't mean I supported their political ideology.

I have walked in anti-violence or anti-war rallies organised by them.

But then, I have attended other events by other political parties as well. I took part in West Bengal Chief Minister Mamata Banerjee's swearing-in as well.

Just because my photograph appeared in newspapers walking in tandem with some Left leaders doesn't make me a Communist.

Till a few days back, I was a politically neutral individual. It was the media that put a certain tag on me.

You always spoke about your non-communal self during your stage shows. You said you named one of your daughters Mumtaz to proclaim your love for the Muslims.

Don't you think your joining the BJP goes against this?

Not at all. What I have realised is that the BJP is a party that is grossly misunderstood.

It has Hinduism as its basic tenet no doubt, but that doesn't make the party anti-Muslim.

Else, why are there so many Muslim leaders in the party?

The onus now rests on us, the new faces of the BJP, to send the right message to the people of this country.

As for me, I remain the same non-communal Sorcar.

Recently, I fell ill. The haemoglobin level in my blood had gone down alarmingly and I needed an urgent transfusion.

After many failed attempts, the only unit of blood that my body could accept was donated by a Muslim.

Therefore, here I am, a BJP candidate, with a Muslim's blood running through my veins (smiles).

This is simply magical!

What is your opinion about the Gujarat riots?

The judiciary of India has given Modi a clean chit. But a section of the media refuses to accept the verdict. They keep calling Modi names for the Gujarat riots.

I am a simple individual and I don't have the guts to rise above the court verdict.

When the court stated that Modi is not guilty, who am I to think otherwise?

How do you think the BJP will fare in Bengal?

I don't think the election will be fair in this state. It is bound to be violent. Hence, the result is unpredictable.

How hopeful are you of winning?

I am a magician. I achieve the impossible on stage. I hope to do the same off stage this time.

Besides, I am a showman; if the people disown me, I am a non-entity.

Do you think Modi is going to be prime minister?

Of course! Who else?

He is a man of steel, a determined soul.

Now that he has put his mind to the mission, I don't think no power on earth can counter him.

What is your opinion of Mamata Banerjee as chief minister?

If I were ecstatic about Mamata Banerjee as chief minister, I would have joined her party.

But the impartial person that I am, if she does something great now, I will be the first one to applaud.

Image: P C Sorcar at one of his performances. Photograph: Jayanta Shaw/Reuters 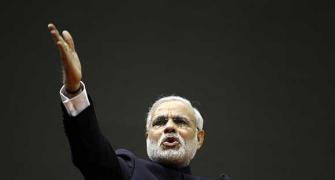 Is Narendra Modi an economic reformer? 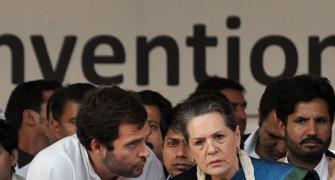 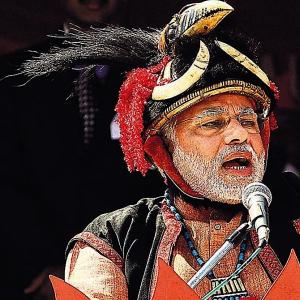