Swarms of locusts entered some residential areas of Jaipur on Monday, presenting the local people with an unusual sight. 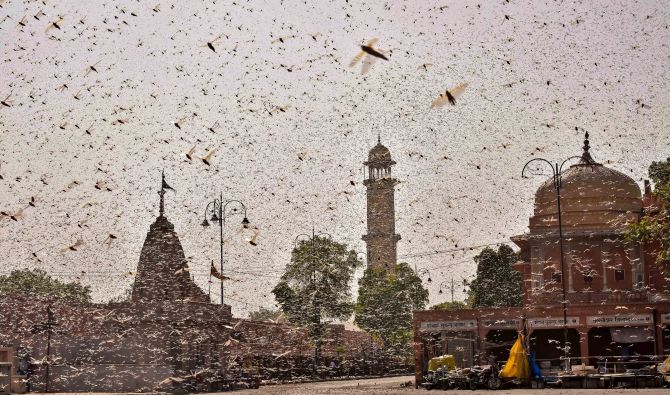 IMAGE: Swarms of locust in the walled city of Jaipur, Rajasthan, on Monday. More than half of Rajasthan's 33 districts are affected by invasion by these crop-munching insects. Photograph: PTI Photo

Locusts normally affect districts in western Rajasthan but this time the swarms have travelled as far as Jaipur city. The swarms later headed towards Dausa district.

The swarms are travelling farther and damaging trees as there are no standing crops for them to feed on, an official said.

In Jaipur's Murlipura and Vidhyadhar Nagar areas, people beat 'thalis' at the locusts that had settled on walls and trees, hoping to make them move on.

"The menace of locust has spread to 18 districts of Rajasthan and they are rapidly travelling in search of food," Om Prakash, the commissioner of state agriculture department, told PTI.

He said the swarms were in Nagaur and reached Jaipur and nearby areas on Sunday.

They were seen in residential areas of the city on Monday and then they moved towards Dausa, Prakash said.

"There is no standing crop on ground so they are staying on large trees and moving fast. Locust control teams conducted operations by sprinkling pesticide in Jaipur last night and today remaining swarms have moved towards Dausa," he said.

Centre's Locust Warning Organisation in Jodhpur and the state agriculture department are working in coordination to handle the locust attack issue.

The latest such attack occurred on April 11 when the swarms entered from Pakistan and damaged cotton crops in Ganganagar to some extent.

The swarms later travelled to various other districts and have now crossed Jaipur.

The director of agriculture department informed that 200 teams are working in the field to monitor the movement of locusts and nearly 800 tractor-mounted sprayers are being used.

He said, fire department is also involved in the operations against the locusts. 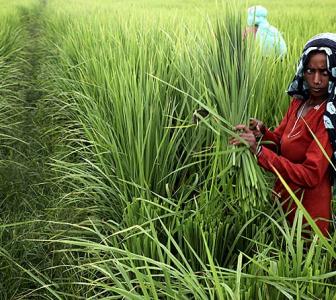 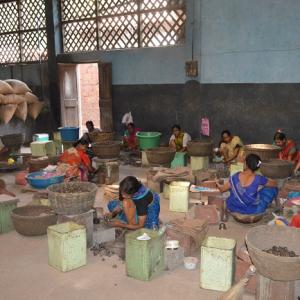