'The bull does not want to go in front of the crowd, so they put chillies on his private parts etc to make him enter the game arena.' 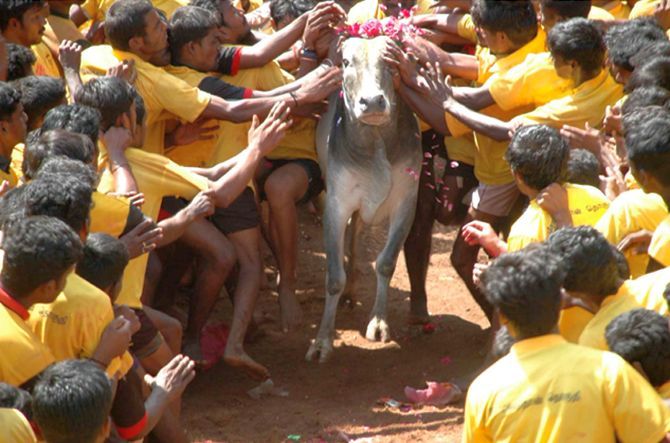 IMAGE: One of the photographs activist Manoj Oswal submitted to the Supreme Court to prove that the bulls were tortured during Jallikattu. Photograph: Kind courtesy, Manoj Oswal

Manoj Oswal, an animal activist, was appointed by the Supreme Court to monitor Jallikattu in Tamil Nadu for three years, from 2010 to 2012.

Along with another animal activist, Prakash Saha, Oswal went to different Jallikattu events to record what happened there.

It was based on his findings that the Supreme Court banned Jallikattu in 2014, which has created a furore in Tamil Nadu this past week and forced the state government to promulgate an ordinance allowing the conduct of the sport.

In a conversation with Rediff.com's Syed Firdaus Ashraf, Oswal, image, below, explains why the-bull taming sport needed to be banned.

How did the case begin?

The case started when one A Nagarajan filed a case against Jallikattu. Nagarajan's son was a painter and once he had gone to paint a Jallikattu event.

During the event a bull killed his son and Nagarajan then approached the high court, stating that this sport was dangerous as people got killed.

A judge then banned the sport, but the division bench reversed it.

This was challenged by the Animal Welfare Board of India in the Supreme Court.

What is the role of the Animal Welfare Board in this?

The Animal Welfare Board is a part of the environment ministry.

It is an autonomous body which has people who are passionate about animal welfare (including Oswal) on its board.

This board is not always on the same page as the environment ministry.

So what happened in the Supreme Court?

If you look at the number of deaths in Jallikattu, very few have died in the game arena.
Maximum deaths or injuries to spectators are happening outside the arena.

The Supreme Court stayed the high court order, and this caused an uproar.

In 2009, then chief justice of India K G Balakrishnan allowed Jallikattu if the state government framed a law for it.

Subsequently, the Tamil Nadu Regulation of Jallikattu Act was passed.

After the Act was passed with certain guidelines, the board was appointed to monitor Jallikattu.

The situation was so explosive that nobody was willing to go and compile a report.

There was tremendous pressure on Tamil Nadu animal activists. Because of my legal acumen, the board told me to go and file a report.

Tell us about the Act.

The bill was purely about human safety and had very little about preventing animal cruelty, except saying that there should be no violation of the Prevention of Cruelty to Animals Act.

However, Jallikattu itself was a violation of it.

The Supreme Court passed an interim order stating that certain steps must be taken for the event.

These were the key measures that were introduced by the Supreme Court in 2009 under the TNRJA. 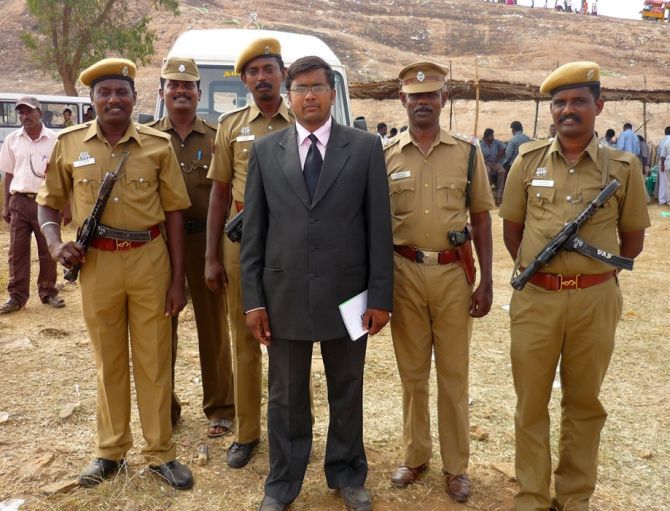 IMAGE: Manoj Oswal with police protection during a Jallikattu event in Tamil Nadu.

What was your role?

I was the main observer from the Supreme Court. I had a photographer and videographer to shoot the event.

My duty was to do inspection of Jallikattu on the Supreme Court's orders.

So the Supreme Court got two reports -- one was from me and another from Dr Manilal which helped ban Jallikattu.

What kind of violations did you record during Jallikattu?

Ninety percent of cruelty never happens in the game arena which the common public sees.

Bulls are docile animals and they run away whenever anyone tries to capture them.

Out of 20 bulls only one or two get caught in the arena.

When bulls come for a Jallikattu event, they are put in queues. They are made to stand for long hours.

There is no water for them, and that is cruelty.

When a bull reaches the Vaadivaasal (the entrance to the arena), he sees some 20,000 people shouting and dancing, which is very scary for him.

Now, a bull, which is just two years old, does not want to go into the arena. He will do everything possible not to go in front of the crowd.

This is where the cruelty starts.

They also make the bull drink alcohol and attack him with a sickle so that he feels that it is worse to stay in the Vaadivassal and better to go in front of the crowd.

But this is the premise of Jallikattu, that the bull goes into the arena.
Are you questioning the very basis of Jallikattu, coming out of the Vaadivaasal, saying it is a torture for the bull?

The bull does not want to go in front of the crowd and then they have to put chillies on his private parts to make him enter the game arena.

I have photographed this and this is mentioned in the Supreme Court judgment too.

They also make the bull drink alcohol and attack him with a sickle so that he feels that it is worse to stay in the Vadivassal and better to go in front of the crowd.

How did they allow you to photograph and record such cruelty to animals?

When I was recording all this, some 20 policemen armed with guns were protecting me.

I can share these pictures with you. My photographer was taking pictures of whatever I told him to click.

I recorded this torture in five districts of Tamil Nadu -- Madurai, Dindigul, Sivagangai, Trichy and Salem.

I submitted about 20 reports of this torture to the Supreme Court. The apex court mentioned one of them while banning Jallikattu.

Is it necessary to torture bulls in Jallikattu?

There are two reasons for it. The first reason is that the bull is scared. He is in a catch-22 situation.

He wonders whether to sit quietly in the Vaadivaasal or go into the crowd.

He would prefer to stay in the Vaadivaasal instead of facing 20,000 people. He doesn't want to come out.

To force him to move out, something more painful and torturous needs to be done, to make the bull uncomfortable in the Vaadivaasal.

That is the crux of the cruelty.

In the Vaadivaasal, the bull is constantly tortured and therefore it runs into the game arena.

This arena is a limited space. Everyone here jumps on the bull to take away the prize from the horns of the bull.

Now, there are variants of the game. They jump to hold the horn of the bull for certain number of seconds.

And if they do so, then they are declared the winner.

Has Jallikattu become more of a commercial sport rather than a traditional sport?

It is not a commercial sport, but it has got mutilated.

In the game arena, 9 out of 10 bulls will never get caught.

There is hardly any cruelty in the game arena.

Approximately how many bulls run in Jallikattu in Tamil Nadu?

Each bull has to be registered for this game.

Around 1,100 bulls participate in Jallikattu.

As a part of culture, don't you think Jallikattu must take place?

The cruelty to the bull does not happen in the game arena.

Once the bull is out of the game arena, the entire crowd starts running around him and it is a free for all.

Anyone can do anything with the bull.

Whatever rules are set in the game arena gets completely violated in the open area when bulls come out of the arena.

This is where the accidents happen and people die.

If you look at the number of deaths in Jallikattu, very few have died in the game arena.

Maximum deaths or injuries to spectators are happening outside the arena.

Bulls are docile animals and they run away whenever anyone tries to capture them. Bulls rarely get caught.
Out of 20 bulls only one or two get caught in the arena.

Around 20,000 people turn up to see one event of Jallikattu and all of them are not able to see the game as it is happening in a narrow space.

It is not happening in some cricket stadium where everyone can see it.

These 20,000 people have not come to see the game, but to participate in it. That is the second problem.

In such a situation, a bull can fall into the village well or get injured because someone takes out their knife and injures the bull.

Who can play the game in the arena?

The players who participate in the game are selected by the district collector.

The boys in the game arena are decent people as compared to the crowd. They do not want to get disqualified.

In one event there are 20 to 40 players present in the game arena.

It is a skill to tame the bull. It is very difficult task to do.

What is the prize amount?

It is more of personal honour than money.

The prize money is a maximum of ₹10,000, but you get recognition all over the village.

Can't there be a compromise between the pro and anti-ban groups?

The easy but expensive option is to construct a well-designed stadium where spectators have no access to the bull.

There should only be players and the bull (in the game arena).

It should also be done in a way that the bulls should not be scared to go into the arena.

If that happens, then the cruelty may not be there. 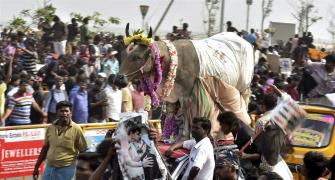 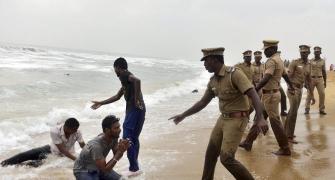 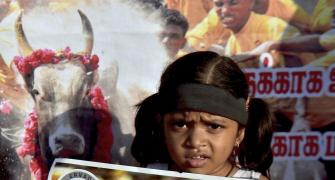 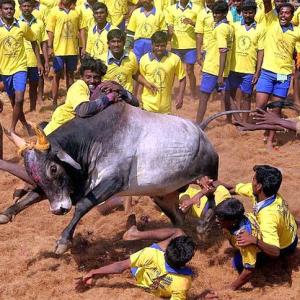