News
Business
Movies
Sports
Cricket
Get Ahead
Money Tips
Shopping
Sign in  |  Create a Rediffmail account
Rediff.com  » News » Is China ahead of India in the space race?

'China pumps in a lot more money than what we do. China's space budget is close to $5 billion while it is hardly $1 billion for us.'
'We manage the programmes within the constraints of our budget. The main difference is we prioritise.' 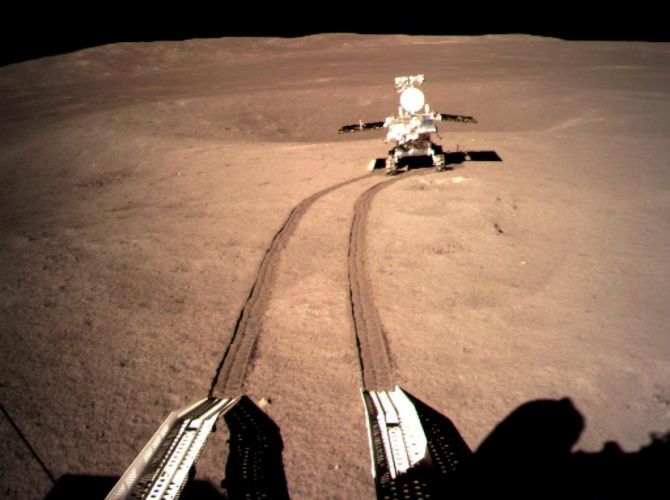 IMAGE: China's lunar rover Yutu-2, or Jade Rabbit 2, rolling onto the far side of the moon in this photograph taken by the Chang'e-4 lunar probe on January 4, 2019. Photograph: Reuters

The probe named Chang'e 4, launched from southwest China in early December, landed on the Von Karman crater within the moon's South Pole-Aitken basin, the largest impact crater in the solar system, at 10:26 am Beijing time on January 2, 2019.

Shortly after the landing, a rover on the landing craft dispatched the first photograph of the moon's surface from its far side back to earth via a satellite communication relay.

Although China, the United States and Russia have operated robotic spacecraft on the moon before, Chang'e 4 is the first spacercraft to land on the side of the moon that always faces away from earth.

The landing 'marked a new chapter in the human race's lunar and space exploration,' the China National Space Administration said in a statement.

"It is a global breakthrough, no doubt about it," former ISRO chairman G Madhavan Nair tells Rediff.com's Shobha Warrier.

For the first time in the world, China landed its spacecraft on the far side of the moon. How do you think China managed this feat ahead of other countries?

This is a unique experiment and they have been working on it for quite some time. It is a global breakthrough, no doubt about it. They have been consistent in their efforts and that's why they have succeeded in this mission.

As they have landed on the far side of the moon which is not visible to us, they had to have a relay satellite. And they have achieved this.

In fact, landing on the surface of the moon itself is a big event, but this time, they have landed soft g and then rolled out the rover which moved around and took pictures.

It is a turning point as far as space programmes are concerned.

How different and difficult is it to land on the far side of the moon as it is not visible?

Landing on the moon technology is the same whether you are landing this side or the far side. But in this case, we have to do the operation in blind.

Only when the relay satellite sends the data, we will know whether we are in the safe. It means we have to wait for a longer period to get a response.

That is the tricky part, but it is manageable. Why do you think no other country -- for example, the US, which is very advanced in space technology -- was able to do this while China did so?

Of course, the US has the capability. If they had set their mind, they would have done it.

After the manned mission to moon, they lost interest in the moon and moved on to Mars. Now, their priority is a mission to Mars. It is not that they (the US) cannot do it.

The funding to NASA have been reduced. Could that be one of the reasons?

No. Nasa programmes are expensive, but with the available funds, they have changed the focus to Mars. It is definitely a new chapter that can throw more light on planetary science.

The moon had broken off from earth around 4.2 billion years ago and from then on, it is almost in a virgin stage.

In a way, you will know how planets have evolved from the data that is collected.

I also understand that they have landed on a deep crater which might have happened due to an asteroid hitting the surface. Probably, they could get some history of it too.

With this achievement and China pumping more money to space science, will China become a superpower in space science overtaking the US?

No, no. I don't think they will overtake the US in the near future.

China's focus is on specific areas like the man mission, mini space station and now, this. You just can't compare the space activities of both countries. IMAGE: The far side of the moon we never see from Earth. Photograph: NASA/NOAA/Reuters

How do you compare India's space programmes with that of China? Why do you think they are leaping ahead?

The major thing is they are pumping in a lot more money than what we are doing.

China's space budget is close to $5 billion while it is hardly $1 billion for us.

We manage the programmes within the constraints of our budget. The main difference is we prioritise.

Our priority is taking the benefits to the common man and 80% of our budget is being used for that.

The current man mission will take away 20% of our budget. That will again lead to technology advancement in the field so that we can be on par with other leading nations.

Most of China's space programmes and ours are similar. We also spend a lot on planetary explorations. They also want to perfect human space missions.

Yes, we are doing our planetary programmes on a shoe string budget. We have chalked out the Chandrayan 2, the Mars Mission and the Mission to Venus.

We will also be progressing in our own way. It all depends on the interests of the scientific community.

You mean our capabilities are no way inferior to China; only the priorities are different?

In the manned mission area, we are lagging behind, but we will catch up with them.

After the Change'e 4 mission, where do you place China on the global space map?

They continue to be in the 3rd position after the US and Russia.

We will be in the 4th spot as Europe is concentrating mostly on commercial launches. They have not set their eyes on programmes like the Man Mission.