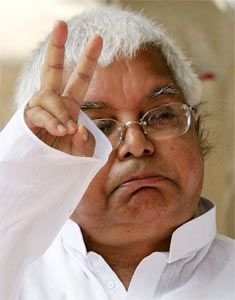 Lalu Yadav's political future greatly depends on the number of years he is sentenced to in prison. If he gets three years, then people will expect him to return because three years is not a very long time, feels Professor Prabhat Ghosh of the Asian Development Research institute, a think tank in Patna.

"The worst possibility for Lalu will be that he gets a 5, 7 years sentence and the leadership goes to the family. In that case, the RJD and Lalu's prospects will be very, very weak," Professor Ghosh told Rediff.com's Archana Masih in a telephone interview.

What impact will Lalu Yadav's imprisonment have on his political future?

Right now it is difficult to forecast. First, we have to wait for the length of the confinement. Suppose he gets it for a very small period of three years, then people will expect him to return because three years is not a very long time.

If it is for five years, then the prospects of the RJD in general and Lalu in particular will be severe and if it is seven years -- which is the maximum -- it will be even more severe. All this depends on the jail term he gets.

The worst possibility for Lalu will be that he gets a 5, 7 years sentence and the leadership goes to the family. In that case, the RJD and Lalu's prospects will be very, very, weak.

The future of the RJD leadership itself remains shrouded in scepticism?

There are two kinds of succession -- family-based -- where his wife and son take over the leadership. This is what his wife Rabri Devi said in a statement yesterday that she and son, Tejaswi would lead the party.

I hope they would be wise and look at the other one or two leaders that are in the party who can take the leadership. If the leadership is passed on to a non-family member, then the prospects would be much better.

People do not like this kind of family-based transfer of power much.

Rabri Devi herself has receded from politics, moreover she lost from both the seats she had contested in the last assembly election.

She is practically a non entity as far as politics is concerned. She is uncommunicative, uneducated. They have two sons -- one of them does not seem very interested in politics. He is a very religious kind of person.

The other son (Tejaswi), who was a cricketer, is better, but is only 25 years old. So we have to wait and see where the leadership goes.

Does this now pave the way for a Janata Dal-United-Congress alliance in the coming election?

There is a possibility of the Congress joining hands with the JD-U. Many of Nitish Kumar's utterances in the recent past will indicate that he is hoping for that. I don't know what is the idea within the Congress about this because whom the Congress allies with is another important factor.

What effect would Lalu's going away have on the Yadav votes in Bihar?

In the last election when Lalu had seen his worst performance, he got 20 per cent of the vote and that is not a small number.

You must remember Bihar politics is not binary politics. There are four players here --- the JD-U, the RJD, the BJP, Congress -- so in a four cornered contest, 20 per cent of the vote, is a substantial vote.

I think if there is a prospect of Lalu coming back -- if he gets a three year term, most of the Yadavs will continue to support him. That advantage will be lesser and lesser if the confinement term is more than 4 to 6 years.

In the RJD's 15 years in power, Lalu capitalised on his Muslim support base, what does the verdict mean for the party's Muslim vote?

All said and done, the Muslim vote for him will not be as solid as the Yadav vote because there are a lot many contenders for the Muslim vote. The JD-U has broken its alliance with the BJP which will be seen as a strong message to Muslim voters.

When Nitish Kumar broke off his alliance with the BJP, it was seen by many as something that would have an adverse effect on the JD-U, but now with Lalu's imprisonment, how will this effect Nitish Kumar's future?

The BJP will not gain anything by Lalu's exit. Many are banking on Narendra Modi hailing from a backward caste. So the backward identity politics will partly go in favour of Modi.

What about the Narendra Modi factor in Bihar? He will address a public rally on October 27.

The BJP's base in Bihar is largely urban. If the BJP wants a higher percentage of votes and larger number of seats, it has to make an impact in the rural areas.

In Bihar, only 10 per cent of the population is urban and 90 per cent is rural.

In the rural areas, the BJP's organisational strength is comparatively weaker. Narendra Modi's presence will add to the BJP's share, but the addition may not be very large.

It will improve the position of the BJP, but it will not be so much that it will outdo the JD-U.

The Bihar BJP is not as strong as the BJP in Madhya Pradesh or Chhattisgarh or Rajasthan.

It would be presumptuous to write Lalu Yadav's political obituary, he still remains the tallest leader of the RJD and has been a master of the political game, isn't it?

It is not the end of the road for Lalu. In Bihar until Lalu came in 1991 -- for 60 years before that -- the entire legislative process was dominated by the forward castes. That was a 60-year-old domination.

That is something people will not forget, but at the same time people also remember that his tenure of 15 years -- except for the first five years -- had been so poor -- in terms of governance, corruption, promotion of family in politics. 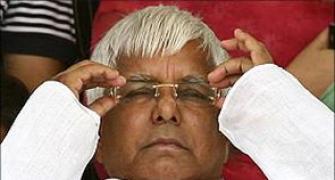 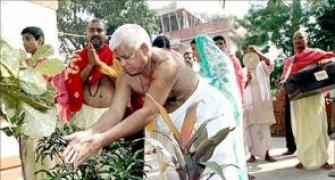 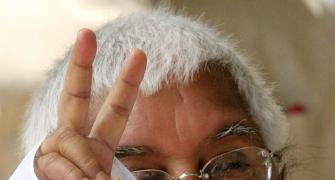 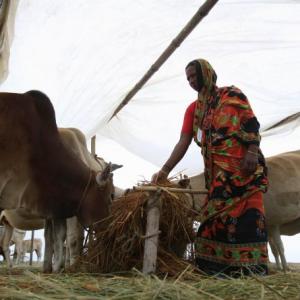 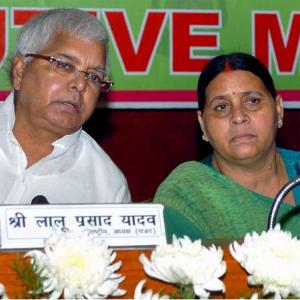