News
Business
Movies
Sports
Cricket
Get Ahead
Money Tips
Shopping
Sign in  |  Create a Rediffmail account
Rediff.com  » News » 'Most corrupt men bribe whoever is in power' 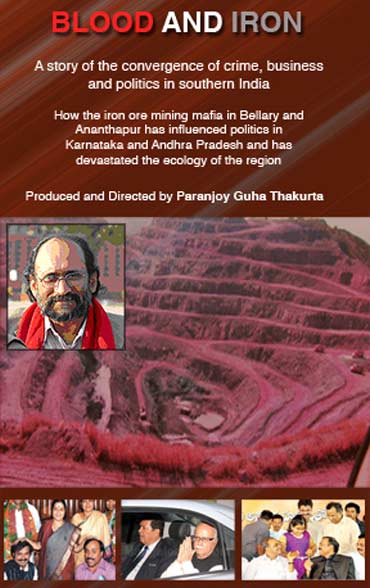 Hidden behind all the administrative scandals that rocked India in 2010, illegal mining is an unnoticed beast that has been eating into the country's soul.

While corruption in spectrum allocation and the conduct of the Commonwealth Games are primarily about monetary loot, illegal mining is about invaluable non-renewable natural resources.

In at least five major states, there were more than 20,000 complaints of illegal mining filed, but the perpetrators carried on with impunity.

At the forefront of the illegal mining scandal was the Karnataka town of Bellary, whose most prominent politicians, the Reddy brothers, are state ministers in the Bharatiya Janata Party government in Karnataka.

Journalist Paranjoy Guha Thakurta visited Bellary over many months to painstakingly put together a documentary Blood And Iron that details how the illegal mining of iron ore has devastated the environment and the people living in the region bordering Andhra Pradesh and Karnataka.

The illegal mining issue has been overtaken by a host of other scandals. What is the situation now in Bellary?

It is not very different from what it was over the last few years. Officially there is supposed to be a ban on mining. But I understand from my sources that there is a lot of illegal export happening.

Karnataka Lok Ayukta Justice Santosh Hegde has said that his second report, which is expected soon, will have a lot of details on the illegalities that have been going on and that it would be more damaging.

It is also significant that the Andhra Pradesh high court has lifted a stay on the Central Bureau of Investigation probing the way in which the Obulapuram Mining Company has been flouting the rules.

The 2G spectrum scam is slowly seeping into public conscience thanks to the CAG-estimated loss of Rs 176,000 crore. What kind of figures are we talking about in illegal mining?

We are looking at huge numbers. The Karnataka chief minister himself has acknowledged on the floor of the House that we are dealing with amounts of money running into many tens of thousands of crores. Even this figure is at best a gross underestimate.

Also, it doesn't account for other kinds of losses to the country that are not so easy to quantify and put a figure to.

Let me differentiate between the spectrum scam and this. When we talk about the spectrum scam, we are talking about undervaluation of a resource. The loss to the nation is presumptive. It is the money the government could have got, but did not get.

But in iron ore mining, these are resources that have gone out of the country. These are non-renewable natural resources belonging to the people of the country. But now the finished steel in is countries like China, it is not coming back.

What Justice Hedge and others have said is that had mining been done by the book, the iron ore would have lasted 25, 30 years. Now it will last for another five years. The real scale of the loot is mind-boggling.

There is also the loss of livelihood, environmental and health degradation. These are bigger social causes, which are difficult to quantify.

The documentary mentions licenses were earlier reserved for the public sector and the problem started when it was de-reserved and opened up to the private sector.

This is something we are now saying in hindsight. Without getting into the private sector-public sector debate, what I am arguing here, is that if only rules were followed, we wouldn't have seen the kind of devastation.

Every single rule of the book has been flouted in Bellary. The sad part of the story -- even as the environment has been devastated and the natural resources have been lost forever -- is that there is every reason to believe that the loot and profits have overtly or covertly gone to the two largest political parties of the country -- the Congress via Andhra Pradesh and the BJP via Karnataka.

As you see, (though they are ministers in a BJP government) the Reddy brothers in Karnataka and Jagan Reddy (until recently, the Lok Sabha MP from Kadapa, Andhra Pradesh) and the late (AP chief minister) Y S Rajasekhara Reddy were certainly not enemies.

For people from very humble origins, the Reddys have come to enjoy such clout...

They were the three sons of a police constable. Their first business was a chit fund business, which bombed. The RBI forced them to shut it down. It was called Enoble Finance. The interesting part is some time after it closed down, they got into the mining business and they then paid back everyone they owed money to in the chit fund business.

In terms of current clout, they control the purse strings of powerful parties. Given the nature of politics in this country, politicians depend on large amounts of money.

I don't thing their influence has diminished significantly. They are maintaining a somewhat low profile. But many people believe they will never be punished.

You said both major parties gained from the Reddy brothers' money. But isn't it the case with most corporate houses?

Corporate houses -- because of the nexus between politics and business -- do not recognise political and ideological differences. Most corrupt men bribe whoever is in power.

Did this start after the end of the license raj?

At one level, the end of the license control raj was supposed to lead to a less discretionary, more transparent system of governance. But with deregulation, the market has expanded exponentially. Thus what you see simultaneously are scams.

What you see are the two faces of liberalisation. It has opened up the other side... the ugly underbelly that is called crony capitalism.

A few rich people, because of their proximity to powerful people, are able to gain unduly. That is the nexus between business and politicians.

You see a pattern. Whether it is iron ore, gas, or spectrum, we see certain patterns emerging.

There is this great back and forth of letters between Rajeev Chandrashekar and Ratan Tata. Once upon a time nobody was willing to even utter a word against the Tatas. Certainly not the media, because they survived on advertisements from people like the Tatas.

There was a huge conspiracy of silence. These monoliths, giant corporates, media houses, all of them were party to this unholy nexus.

Now there are small independent entities like Wikileaks chipping at these monoliths that were till now never questioned.

If you believe in the role of transparency in a democracy, then I believe it is important for the media to expose this nexus.

You asked me what problems I faced in making this movie. The biggest was convincing people to fund a project like this. Those who have the resources want to stay in the good books of those in power.

What is so significant about illegal mining in Bellary? Isn't it happening elsewhere too?

It is happening everywhere. What is unique is that it is the complete convergence of crime, business and politics.

It epitomises what is going wrong with the way in which this country is developing.

Watch a clip from Blood and Iron

Also read:
Mining scam: A nexus between blood and iron
'The mining scandal is the biggest in India'
This is the plight of the honest govt official