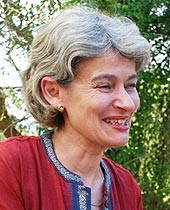 The United Nations Educational, Scientific and Cultural Organisation was founded at the end of World War II. UNESCO seeks to function as a laboratory of ideas and a standard-setter to forge universal agreements on emerging ethical issues.

On October 15, 2009, Irina Bokova of Bulgaria was elected as the tenth director-general of UNESCO.

During her recent visit to India, Bokova spoke to Claude Arpi about her vision and aspirations for UNESCO in a changing world.

You mentioned in a recent speech that we are living in world were money is all-important. Do you think that culture has a place in today's world?

I think that culture is a very important factor in life. I have often expressed regret that it (culture) is not taken into account when calculating the rate of development. If culture does not accompany development, societies will not be balanced. There will be a lack of moral and intellectual values.

During my election campaign, I promised that I would re-launch the debate on culture and development. I believe UNESCO is doing some very positive things in this area.

UNESCO gives a response to globalisation by adopting conventions for the safeguard of the heritage of nations and by providing support to local communities in their search for an identity. It is an important part of our work in this globalised world. We also support cultural diversity.

I believe that cultural industries and cultural cooperation are important for finding post-conflict solutions in many countries -- by spreading knowledge and understanding about others. It is an extremely important factor of contemporary life.

I am very proud to be the first woman director-general. I think that it was high time to have a woman leading this organisation, which promotes values and education, the sciences, culture and communication.

I am aware that there are a lot of expectations. I feel this enormous responsibility. For me, it is a larger responsibility because I am a woman. I take it with good faith. I am fully mobilised to work for the objectives of this organisation, to convert it into a leading organisation that is known for its competence. I believe also that multilateralism is an important framework for finding responses in this complex world.

Secondly, I think UNESCO has an increasing role to play in a globalised world. In the wake of the economic crisis, we can see that education has been adopted as a response to the challenges of the crisis, both in developed and developing countries.

We see an increasing need for cultural values that unite people and create harmony amongst people. We see also, in issues like climate change, that science and the humanities should be given a priority.

Finally, it is important to respect human rights, freedom of expression and the liberty of people. It is one of the basic responsibilities of our organisation. We also promote the message of more humanism and more respect for other human beings all over the world.

Do you think women can change the world?

Do you think that in emerging nations like India or in poorer countries, for example the African nations, women have an important role to play?

Yes, of course. I think that is why gender equality is one of UNESCO's priorities. Unfortunately, women are subjected to a lot of discrimination in many places [in the world]. When it comes to education, we see that two thirds of the illiterates of the world are women or girls. Women have a much higher percentage of school dropouts; in some cases, girls are not sent to school at all. They form the large majority of the 75 million children who do not receive primary education. I believe that we can do a lot more in this regard.

Do you see a danger to UNESCO's scheme of World Heritage Sites? For example in India, some places attract millions of tourists, resulting in environmental degradation.

I am aware that the sites on the World Heritage list attract a lot of tourists. In most places, it is welcome because it brings a lot of economic revenue to the area. However, it is not only a problem in India; many other places also face this dilemma -- how to balance or reconcile the economic interests of a cultural site and its preservation? I think that it is the biggest challenge that we have to face apart from other issues, such as archaeological excavations and preservation activities.

How do you handle it?

Well, we advise governments, but we do not discourage tourism and its economic activities. We understand that for many countries they are very important. One of the basic criteria for being listed [by UNESCO] as a World Heritage Site is the site's 'outstanding universal value'. If millions of people want to visit such sites, it is a very positive thing.

The World Heritage Sites unite us; they are also a message of intercultural dialogue, providing more knowledge and more understanding about each other and, at the same time, encouraging governments and communities to pay much respect to the environment and keep the authenticity of the monument.

This trip to India has been one of your first official visits after your election. What is the purpose of your visit and how do perceive the relations between UNESCO and India?

I have come to India to pay respect to this great country, to the great culture. I have come also to meet officials. I met External Affairs Minister S M Krishna, Minister of Human Resources Development Kapil Sibal, who is also the chairman of the Indian National Commission for UNESCO. We talked about cooperation between UNESCO and India, as well as the comprehensive challenges in the field of education, although India has made huge progress in its fight against illiteracy. I congratulated the minister for the adoption of the Right to Education Act, which will now have to be implemented.

I delivered a lecture at the Indira Gandhi Open University, which is one of the largest open universities in the world. I was very honoured to be invited to the inaugural function for the 25th anniversary of this university; it was called the Silver Jubilee Lecture. I also had the opportunity to speak to the faculty and staff about the possibility of extending our cooperation by creating joint programmes and UNESCO Chairs in the areas of technology and communication. In this way, we will have cooperation with IGOU in the fields of media and education. I am happy that they accepted.

Are you first a Bulgarian or a citizen of the world?

(Laughing) I recently met Dr Karan Singh, who is the Indian representative on our executive board, and during dinner (where Sibal was present), a very interesting discussion on globalisation and its impact on our identity took place. We all agreed that we have several identities. I consider myself to be profoundly Bulgarian, but at the same time I am a European because Bulgaria recently joined the European Union and because Bulgaria is one of the oldest European cultures. I consider myself also to be a citizen of the world.

UNESCO and Auroville, the international community in South India, have been connected for 43 years. In 1966, the first resolution supporting Auroville was passed. In 2008, on the occasion of Auroville's 40th anniversary, UNESCO passed the most recent resolution. How do you see this relationship?

I see this relationship as being a message of tolerance, peace and unity. The underlying vision and vocation of UNESCO is more tolerance, more harmony; it is about resolving conflicts and bringing more peace into the minds of the people. The same message is behind the creation of Auroville, which is why UNESCO has been associated with it. It is this message of humanism that we share. 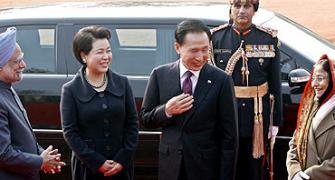