'India is a major target for ISIS and Al Qaeda because it has a very large Muslim Diaspora, regular conflicts with a Muslim country and experiences violent clashes between Hindus and Muslims on a regular basis.'

'This provides for a very stable breeding ground for jihadist radicalisation and recruitment.' 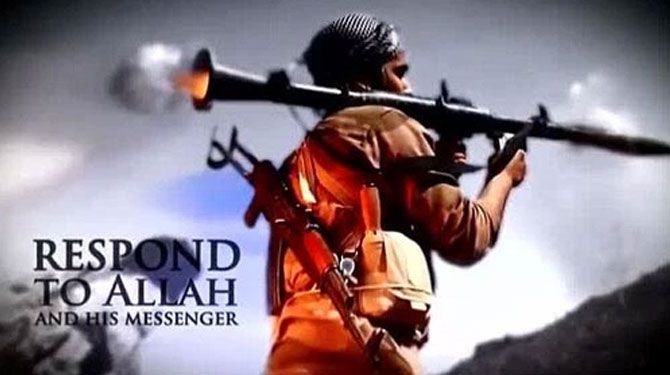 IMAGE: A screen grab from an ISIS recruitment video.

In early 2015, New Zealand -- located thousands of miles and two oceans away from the Syria-Iraq battlegrounds, with a negligible Muslim population of less than 1 percent -- had 6 fighters enlisted with Islamic State or Da'esh, which had till mid-2015 recruited 25,000 people from over 100 countries.

In spite of ISIS's ferocious social media presence, partly responsible for successful enlistments -- its affiliates posted 129,600 tweets in 2014 alone, before some 500 accounts were deactivated -- till late 2015, ISIS had lured and converted only some 17 Indians to its cause, according to United Nations and the US National Counterterrorism Centre statistics.

Experts have suggested that young Indians have been immune to a certain type of radicalisation that makes the ISIS cause attractive because they do not cope with the feelings of alienation that young Muslims elsewhere face.

In the wake of last week's arrests of ISIS synmpathisers all over India, Koehler discussed ISIS-inspired radicalisation with Vaihayasi Pande Daniel/Rediff.com

What is the Indian situation vis-a-vis ISIS?

India is one major target for ISIS and Al Qaeda because the country has a very large Muslim Diaspora, regular conflicts with a Muslim country (Pakistan) and experiences violent clashes between Hindus and Muslims on a regular basis.

This provides for a very stable breeding ground for jihadist radicalisation and recruitment.

Does India figure in any ISIS plan in a larger and more sinister manner?Is there something the Indian national security establishment needs to be worried about?

Right now, I would say that the biggest problem for India, with regard to ISIS, is the threat of recruitment to join the jihad in Syria and Iraq and the returnees.

The bigger threat currently could come from Al Qaeda, which has proclaimed the 'caliphate' in Myanmar, Bangladesh and parts of India. The competition between the two groups forces Al Qaeda to be more aggressive and commit terrorist acts.

On the other hand, ISIS has shown a great deal of attraction for the Taliban in Pakistan and other violent networks already present.

India lies right at the centre of two jihadist terrorist groups fighting each other for power.

What are the best strategies available to fight the threat of ISIS in a calm, non-kneejerk, manner?

It is important to counter the jihadist ideology and not support it indirectly through standalone security crackdowns etc.

India so far has no sophisticated deradicalisation programme, which is essential in this regard. Working with families is another tool to detect early radicalization and prevent it from going further.

There have been some cases of young Muslims getting radicalised in India, but at the moment it does not seem a large-scale threat. How can one prevent it from becoming a threat?

There needs to be a prevention network trained and designed to spot radicalisation and to develop individually tailored counselling strategies. This needs time, resources and specialised expert training.

In the long run, India will face more threats and should start building something now before it is too late. IMAGE: A Muslim boy at a rally organised by a Muslim charitable trust in Mumbai. Photograph: Shailesh Andrade/Reuters

Are there important reasons why young Europeans get radicalised that may not be the case for young Muslims in India?

No, I do not think that there are essential differences. The reasons why ISIS is appealing are basically the same in India as elsewhere.

Would you be aware of that? Could that kind of radicalisation also grow in India?

We have seen this kind of reciprocal radicalisation in Western countries as well. It is almost a natural reaction against the perceived threat from jihadists, but only plays in their hands really.

That would be another threat for India which will most likely grow. What factors account for the threat of radicalisation in a society?

Radicalisation has many different reasons and causes. There is no single profile of (the) list of risk factors that would explain every case of radicalisation.

It is important to know that it always takes two types of factors for every individual: Positive and negative aspects.

Negative are any kind of frustration, like bullying in school, fights in the family, racism, no job etc.

Positive are, for example, quest for justice, honour, freedom, significance, to live up to your ideals.

Both are bound together through radical ideology. The individual mixture is always different. There are no general societal aspects which favour radicalisation. It can happen with anyone.

Are there parallels of this phenomenon in other times?

Is going to Syria to fight sort of as attractive and daring as Woodstock, rock and roll and drugs was to '60s youngsters or the rise of Communism in Russia in 1917 or the Prague Spring or the Arab Spring?

Or is it a phenomenon worse or far stranger than young angst being acted out?

In terms of numbers -- how many foreign fighters have gone to Syria -- it is worse than any civil war conflict we have seen so far.

The issue of mobilisation around a political or religious cause is, of course, nothing new at all, like terrorism as such is not.

It goes back to ancient times, for example, with the Sicarii in Rome-occupied Palestine or the sect of the Assassins.

Any larger youth counterculture displays similar elements, but the turn to violence can only be understood through the specifics of the respective ideology.

To me, it seems that the physical isolation of youngsters caused by the Internet-social media age has something to do with it?

Could that be so? And hence the more unique 2012-2015 concept of radicalisation?

The Internet is not isolating youngsters at all. It liberates them. I have done research on the role of the Internet on radicalisation and think that the virtual community feels as real and important to these kids as the offline world.

Think about it: They play games together, chat, Skype, talk about everything, watch movies together etc.

In this way a kid in some small village with no radical group can become an active member of a global movement.

There is a case of a young woman, from a well to do family, who was radicalized in a city near Mumbai.

There are, of course, different strategies and I would need more information.

But it generally is about identifying the causes and motivations for her radicalisation and addressing all of them in a non-coercive way with intervention providers that are most trustworthy.

Common mistakes are usually to apply force through police etc, which enforces the radicalisation process. Parents need specialised counsellors who are trained to understand the role of the family. Why did no one initially believe that young Western, white, youngsters from Christian backgrounds could not be radicalised in this manner?

I think they knew it could happen potentially, but they underestimated the sophistication of groups like ISIS. They are simply better in recruiting and producing propaganda than any other terrorist organisation in history.

In the European/Western context, does family background have a role to play, with ISIS recruits coming from disjointed/dysfunctional family setups?

No. I have worked with almost 200 families in the last five years and they were all extremely different and came from all possible backgrounds.

Radicalisation can potentially happen with any background.

Given that the family as a unit is still holding up in India and Asia, perhaps those societies are better placed to face the risk of radicalisation.

That would mean only that family counselling can be more effective in India and Asia, not that they are immune against radicalisation.

It is dangerous to think that simply because a family sticks together they can successfully fight off radicalisation.

Parents are usually completely unprepared against a sophisticated organisation like ISIS.