'On the LAC, China can undertake military action at any place with much fewer resources. It can do 'salami slicing'.' IMAGE: 'Recently, Modi and Xi met after two years at the G20 meet and within one month there was another face-off.' All Photographs: ANI Photo

"If China enters Taiwan, there's a chance it might get entangled with the USA, Japan, the Philippines, South Korea, etc. It has no exit option once it crosses the Taiwan Strait," says Lieutenant General P R Shankar (retired) former director general of artillery and professor, aerospace department, IIT-Madras.

"Whereas on the Line of Actual Control, China can strike at any place using fewer resources and with an exit option. The 3,500 km-long LAC provides more opportunities to carry out their designs," General Shankar tells Rediff.com's Archana Masih in the first of a two-part phone interview. 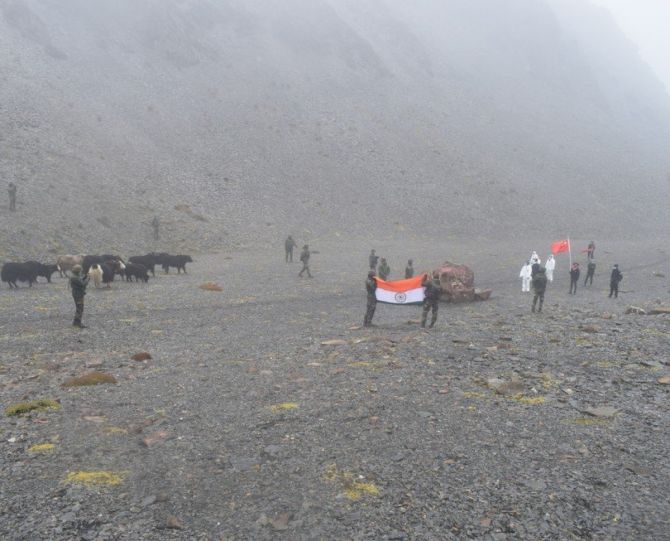 IMAGE: The Indian Army hands over 13 yaks and 4 calves that strayed across the LAC in Arunachal Pradesh's East Kameng to China.

What are some of the lessons and new challenges that emanate from the face-off at Yangste in Arunachal Pradesh?

If you look into the Sino-Indian history of conflict, the number of face-offs and incursions have increased dramatically since Xi Jinping assumed power in 2012.

There have also been a phenomenal number of summits and other meetings between Prime Minister Narendra Modi and President Xi Jinping. The two have met 18-19 times since 2014.

A major part of these summits and meetings have been about keeping peace on the border between India and China, but yet the opposite has happened.

Almost every summit or every important meeting between India and China has seen a faceoff or transgression going back to April 2013 when the incident at Depsang happened ahead of Chinese Premier Li Keqiang's visit.

In 2017 when Xi and Modi met in Ahmedabad, there was a Chinese incursion happening in Chumar.

Hence, chronologically, almost every meeting has been preceded or succeeded by transgression.

All these incidents are a well-planned Chinese strategy; they are not ad hoc.

Recently, Modi and Xi met after two years at the G20 meet and within one month there was another face-off.

Therefore, there is a lesson in this pattern which shows that China will talk to you, but will do exactly the opposite. The Communist party congress in October asserted that Chinese territory must be assimilated with the People's Republic of China. After Taiwan, will China target Arunachal Pradesh which it calls 'South Tibet'?

The widely held view is that China's main focus is Taiwan. Everyone talks about China's design of going into Taiwan and capturing it militarily, but China has not done any such action.

So, the question is whether it is India or is it Taiwan that is China's prime military target?

According to me, India is the prime military target because the empirical evidence, historical evidence and the actual ground situation point in that direction -- and we need to be prepared accordingly.

Going ahead, we need to enhance our preparedness in the light of China's stagnating/declining economy and another surge of the Covid pandemic.

China's target is India and hence, we must be prepared.

If you take the larger perspective, China has two politico-military problems -- India and Taiwan.

Taiwan is a high risk operation where China may or may not succeed. Moreover, China is still not prepared to undertake this action as of now.

If China enters Taiwan, there's a chance it might get entangled with the USA, Japan, the Philippines, South Korea, etc and hence there's no exit option once it crosses the Taiwan Strait.

Whereas on the Line of Actual Control, China can undertake military action at any place with much fewer resources. It can do 'salami slicing' and undertake other activities.

The 3,500 kms long LAC provides more opportunities to carry out their designs.

They can start with small pockets and enlarge the areas of conflict.

It also provides them with an exit option for every action -- they can always go back to its people and say they were just defending the area claimed by them which the Indians have transgressed.

This is also the narrative that is coming out of China.

So we have to be alert to this fact and prepare accordingly in view of this background. IMAGE: Indian soldiers demonstrate a drill in the Tawang sector near the Line of Actual Control to tackle any threat from the Chinese side.

A face-off happened in Arunachal Pradesh last year. Are we going to see repeats of such face-offs and incursions on a more sustained basis?

We don't know what kind of incidents, but they will be there.

In that case we need to have our modernisation, theatre-isation and jointness plan in place that was envisaged when the chief of defence staff was appointed.

The big question is whether all this is going as scheduled.

All this needs a revisit and rethink in light of the Chinese actions.

Another question that arises from the face-off in Yangtse is about the Agniveer policy.

I would be interested in knowing how many of the jawans who took part in this operation had less than four years of service.

What will happen tomorrow when the number of Agniveers on such pickets goes up?

Will Agniveers with four years of training be able to deliver the results which our jawans have delivered in Yangtse?

We should ask the company commanders and battalion commanders on the spot if they would have been comfortable with Agniveers under their command in that face-off.

There are reports coming from China and in the international media about the poor morale and inexperience of the PLA troops.

In fact, there was an article in the New Yorker and in the South China Morning Post about the prevalence of mental illness amongst PLA troops.

Ultimately, at those heights, it is the troops that matter the most.

Today, we have this great advantage of an experienced Indian Army vis a vis an inexperienced or under confident PLA.

In time to come, what will be the results when we deploy Agniveers in these areas? In that light, is there a need to modify the Agniveer programme? These are some of the lessons that we must bear in mind. 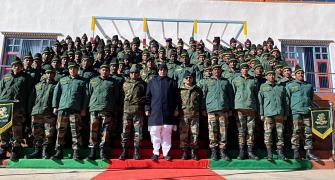 'Chinese claim on our land is wrong' 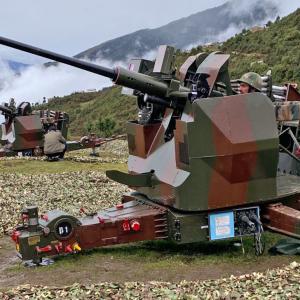 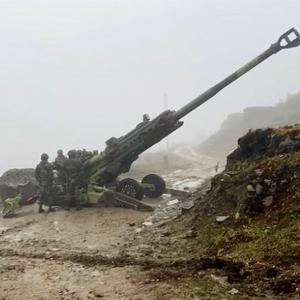 'China could be preparing for full scale war'