News
Business
Movies
Sports
Cricket
Get Ahead
Money Tips
Shopping
Sign in  |  Create a Rediffmail account
Rediff.com  » News » 'If Jayalalithaa wanted, she would have chosen Sasikala as her successor'

'If Jayalalithaa wanted, she would have chosen Sasikala as her successor' 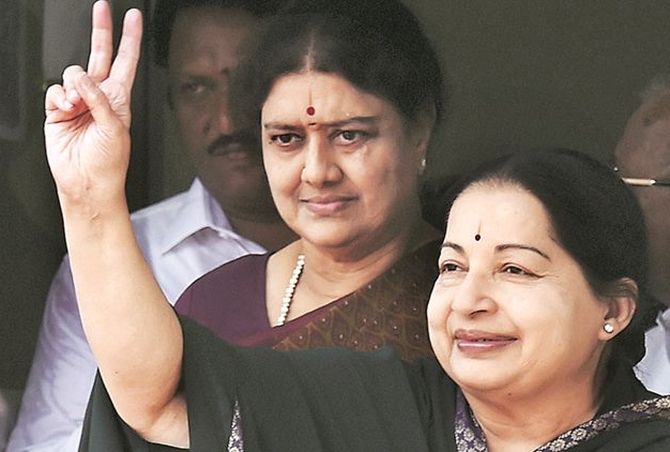 'There is no doubt that Sasikala wanted the transition to go this way.'
'The only thing the AIADMK MLAs want is to stay in power.'

Dr R Manivannan is the professor and head of the department of politics and public administration at the University of Madras.

After Jayalalithaa's death, people expected a power struggle among the various power centres in the AIADMK (All India Anna Dravida Munnetra Kazhagam), but it appears Sasikala taking over the party's reins is going to be rather smooth.

What surprised many after the passing away of Jayalalithaa is not the power struggle or the chaos or the confusion, but how the power is transferred.

Had there been a healthy power struggle which you expect in a democracy, it would have been different.

There is nothing wrong in having various power centres. But they tell us that there was no difference in opinion in elevating a person who was never in any power position.

It was like a pre-ordained transition, pre-ordained not by the consent of Jayalalithaa, but by a group of people who have planned all this.

Do you feel it is because only six months have passed after the elections?
It is said almost all the candidates for the 2016 election were chosen by Sasikala and that is why they all are showing their allegiance to her.

They (the elected representatives) can be loyal to anyone.

It seems their foremost loyalty is to power, whether they were chosen by Jayalalithaa or Sasikala or someone else!

The fact that they were chosen by Sasikala, they will make sure that they remain loyal to her.

It doesn't matter whether they are with or without Jayalalithaa. What matters is only clinging to power.

What makes all the difference is that there are four-and-a-half years more for the legislature to end.

If there was only a year or year-and-a-half ahead of them, the scene would have been different. Then we would have heard different voices.

Now, they don't find any reason to speak. The only thing they need or want is to stay in power.

Many people expected a power struggle...

The party should have shown that there are leaders within the party.

Moreover, the credibility of the leader they have chosen was questioned many times by Jayalalithaa herself.

Also, she has been accused in several corruption cases.

She is a part of the problem and not the solution.

I certainly expected some kind of discussion at least on the various options on the leadership issue.

Though she has not said anything, they have surrendered themselves to her.

But then this is the AIADMK culture. It is a personality centric party which follows a myopic consensus.

Do you think she was preparing to take over the party by showing her strength to the party members with her entire family by her side the day after Jayalalithaa died?
These people were, in fact, expelled by Jayalalithaa from the AIADMK when she was alive.

There is no doubt that Sasikala wanted the transition to go this way.

She never said that after Jayalalithaa passed away, I would leave politics and go away.

It is quite obvious that she wanted to control the party and the government.

And she is doing precisely that.

Do you think a political novice can control the party and government for long?

If she can survive the next four years, that would be the maximum she could achieve.

I don't think they are looking at bringing the party into power again.

What they want is not to lose the power they have.

By rallying around her, the party has shown what kind of a leader they want now and who the legislature show their allegiance to.

It is not about leadership; it is about survival.

We see the chief minister, bureaucrats and police officers going to meet her at Poes Garden every morning. Is it not shocking?

She is not a nobody; she is the one who is controlling the party and no one is prepared to challenge her.

This exposes the complete weakness of the present elected leader who did not stand up and show his priorities.

When the leader himself behaves like this, the select bureaucracy also follows.

In Tamil Nadu, the bureaucracy always played the same politics like the political parties.

They played to recognise the powerful and the influential people.

They behaved like the kitchen cabinet of the late chief minister, so this is what is expected of them.

In fact, the bureaucracy is also working tandem with the transition.

Will the people of Tamil Nadu accept her as the heir to Jayalalithaa, the same way AIADMK leaders have accepted her?

Not at all. Because people have a better understanding of politics than the politicians.

Political leaders may force a certain kind of politics on the people, but they look at and understand politics in a different way.

Do you think Jayalalithaa would have wanted Sasikala to take over the party?

If she had wanted, she would have chosen Sasikala as her successor long back as she has been with Jayalalithaa for over 30 years.

And Jayalalithaa had not been well for the last couple of years also.

If she really wanted, she would have chosen an heir at some time or the other.

Is it advantage Stalin and the DMK (Dravida Munnetra Kazhagam) now?

Not in the near future.

I feel the advantage is for the BJP (Bharatiya Janata Party) and the party is looking to gain more from the voting constituency.

They have a loyal government now, more loyal than Jayalalithaa's.

The state government has to depend on the Centre for not only policy support, but also protection.

How will it help the BJP, a party that has absolutely no support base in the state?

The BJP aims to replace the AIADMK in the future.

They expect some vote transfer of the dominant Thevar community of the south and also in the western region, at least in the Parliament elections.

You can expect the AIADMK votes to get transferred to the BJP in the future.

As Jayalalithaa was the party and the party was Jayalalithaa, many expected the AIADMK to disintegrate after her, but it has survived rather well.
Do you think this will last only till the next elections?

The party may split and not like you say, disintegrate or disappear.

But the split will happen only after sometime. I give them a year-and-a-half.

You will see new centres of power in the coming elections.

That means, it is advantage DMK?

It is advantage DMK, but you cannot completely gift an advantage.

It is so far away that we do not know what kind of changes we will see in the DMK though I don't deny some kind of advantage to the DMK.

Yes, the AIADMK splitting is welcome for the DMK any time. But we do not know how the political equations will change in the next four years.

What will happen to the state administration when every politician is in a survival mode?

The truth is, the state has not been administered for the last four-and-a-half years.

People are judging Jayalalithaa by only the populist programmes.

I would say the state administration has been affected and will be affected in the future too.

When did we last hear about workable policies and employment generation?

When Jayalalithaa passed away, we heard only positive things about her, about her charisma, about the Amma brand etc.

When will people start talking about the hard realities and evaluating her rule in a truthful manner?

I am sure that will happen. You should also understand that the whole country has been governed the populist way.

Tamil Nadu is not an island. Our standards of reference are different and we consider those in power as above the law.

Proper evaluation of people and system and administration is very indifferent.

Jayalalithaa was evaluated critically when she was in power. Still people voted for her, and it was for her welfare policies and the rural programmes and not for her administration.

People think all our politicians are corrupt. Tell me a politician who is not corrupt?

If someone is benevolent, that tag is much celebrated. People want the corrupt politicians to be benevolent and if they are benevolent, corruption is accepted.

That is the level of acceptance of corruption.

That is why Jayalalithaa stands tall, as both the urban and rural poor think she was empathetic to their problems.

That made all the difference to her image. 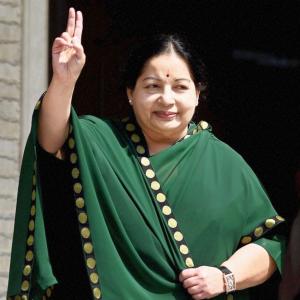