'It seems to be like a war is imminent' 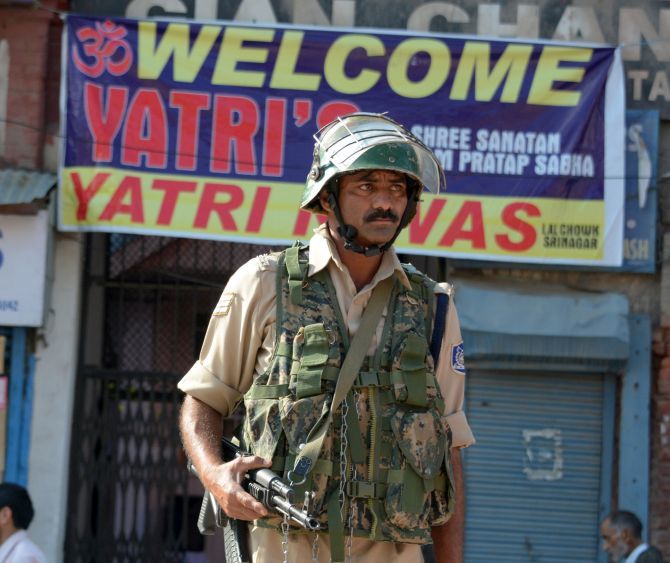 IMAGE: A security personnel stands guard in Srinagar outside a tourist guest house after the government issued a security advisory for Amarnath pilgrims and tourists to curtail their stay in Kashmir. Photograph: Umar Ganie for Rediff.com

A delegation of Jammu and Kashmir parties met state governor Satya Pal Malik on Friday, August 2, to express their concerns about the panic situation in Kashmir valley following the advisory issued by the central government asking Amarnath pilgrims and tourists to return as soon as possible.

Even though the governor assured them that there was no threat to Article 370 and 35A, the political leadership from the Valley want such assurances to come from the ministry of home affairs or the PMO.

'It is not about trusting the governor but the ground situation not matching with what he has said,' Jammu and Kashmir People's Movement chief Shah Faesal, who was one of the leaders to meet the governor tells Rediff.com's Prasanna D Zore.

'We request the Government of India to immediately come fair about the situation in Kashmir before it is too late," the former IAS officer, below, who quit the service to become a political leader in Kashmir, said.

What is the ground situation in Kashmir right now?

It seems to be like a war is imminent.

Air Force is on high alert, there is panic on the streets, petrol pumps are running dry, all Amarnath yatris have been asked to move out.

There is unprecedented security deployment across Kashmir valley and nobody is telling us anything.

Everything is shrouded in secrecy.

Who do you mean by nobody?

From the smallest government official to the governor of the state.

There is total silence.

A delegation of Kashmiri leaders met Jammu governor Satya Pal Malik on Friday. What happened in the meeting?

We met the governor last night.

It was a late night call.

We asked him to tell us what is happening in the valley.

We told him that the people are facing huge problems.

Hundreds and thousands of non-Kashmiri labourers are stranded in the valley with nowhere to go.

They don't know what is happening here.

The governor assured us there is no threat to Article 370 and (Article) 35A.

But we told him we are not convinced because the people of Kashmir would want such assurances to come from the ministry of home affairs or the PMO (prime minister's office). Why don't you trust the governor's assurances?

Yes, we are waiting for Delhi to come out with a statement.

But there is only silence we hear.

It is not about trusting the governor but the ground situation not matching with what he has said.

The situation in the valley is extremely tense because people feel that attempts are being made to do away with Article 370 and 35A.

Who were the leaders who met the governor last night?

We met the governor for 20 minutes.

How is the political leadership in Kashmir planning to handle the situation?

One positive fallout of this unprecedented situation is that it has helped all Kashmiri political leadership to unite.

We all feel that this issue is far more larger than any of us.

We will be putting up a united resistance to any move that attempts to unilaterally abolish Article 370 and 35A.

Even in this crisis, people are getting lot of hope the way the leadership has united for Kashmir.

What is the collective wisdom of the Kashmiri political leadership right now? Do you feel that Article 370 and Article 35A will be abrogated?

Collective wisdom is if the prime minister were to get the right advice, then this would not have happened.

This is completely illegal and we are hopeful that the prime minister will get the right advice and not disturb peace in the valley.

He was in Delhi yesterday.

He will be joining us today as he is coming to Kashmir. What is the sense that Omar Abdullah is getting in Delhi? Did you speak with him about the situation here?

Yesterday he tweeted that this is unprecedented in the Kashmir valley.

Even he doesn't have any clue as to what the government intends to do in Kashmir.

How long will the necessary supplies like fuel and ration last in Kashmir?

Already we are seeing fights and chaos happening across ration shops.

There is only one link (for the Kashmiris) to the rest of the world -- the Jammu National Highway.

That is also not properly functional because of a landslide.

That has led to lot of panic in buying and hoarding by the people, leading to shortages of essentials like fuel, ration and medicines.

What is your message to the Government of India?

We request the Government of India to immediately come fair about the situation in Kashmir before it is too late.

What do you mean by 'before it is too late'?

Anything can happen under this extreme stress and tension.

It could lead to street violence if the fears and concerns of the people of Kashmir are not addressed. 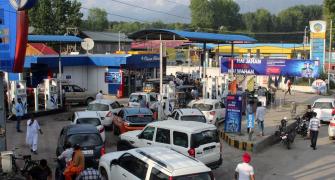 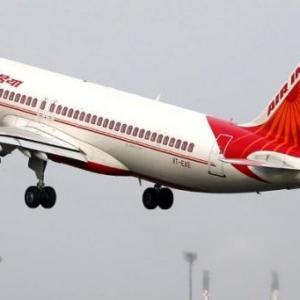