'Rahul Gandhi should retire and not harm the Congress further' Harsh Mahajan was the working president of the Himachal Pradesh's Congress unit until last week.

Mahajan, who ditched the Congress and joined the Bharatiya Janata Party on September 28, 2022, tells Prasanna D Zore/Rediff.com why he decided to join the BJP just weeks before the assembly election in Himachal Pradesh.

Why did you quit the Congress after almost five decades of association with the party?

I have been a Congressman for almost 45 years now. I had to quit it because Congress as it exists today has become completely hollow. It has become leaderless and visionless.

The party is existing in a vacuum right now. It has lost its purpose to exist.

It is disintegrating fast and in the days ahead it will just splinter away and vanish.

All the tall leaders have already quit. The Congress today is being governed by self-serving leaders. That's the reason I quit the Congress and joined the BJP.

In the BJP there is a strong leadership; there is a leadership with stability and vision which can take India forward. They also have a very strong organisation. How long have you been feeling frustrated in the Congress?

I waited long for it to improve, but my wait has limits. Everything is going downhill for Congress. Every second leader worth her or his weight has quit the party and it is in total shambles.

There is nobody to take any decisions. I am sure after this Rajasthan episode (the tussle between Chief Minister Ashok Gehlot and chief ministerial contender Sachin Pilot) the Congress will disintegrate quickly.

Many more people are on their way out of the party. People who still have sense in their head will leave this party now. It has gone to the dogs.

What particular grouse do you have against Rahul Gandhi?

Haven't you seen the way in which the Congress graph has fallen (during his tenure as the president of the party and later as the de facto party president)? Is that not enough?

We lost Punjab, we lost Goa; we lost Madhya Pradesh. Every state (where we had a government) we are losing. Very soon, Rajasthan too will suffer the same fate.

Either Gehlot will form his own party or Sachin Pilot will have to come to the BJP.

There is no person to handle the Congress or feel accountable for what's happening with it. There is no sense left in the party anymore.

Rahul Gandhi is a casual tourist. He doesn't listen to people. He is in and out (of the meetings) as he wishes. He has no time to listen to the leaders from the state. 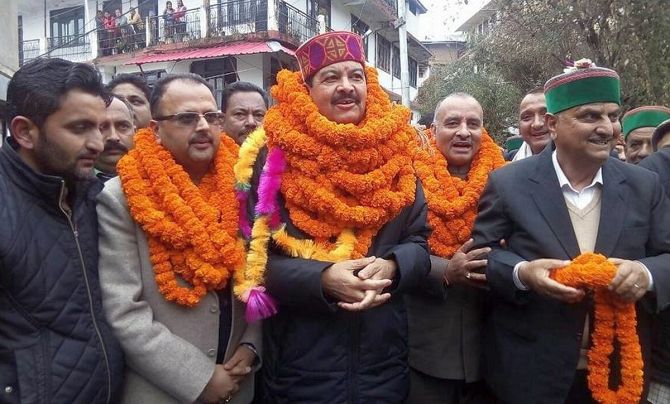 You have criticised the ma-beta culture in Himachal Pradesh as well as in the central leadership...

You also had run-ins with the Himachal Pradesh Congress leadership where your late mentor Virbhadra Singh's wife Pratibha Singh is the state Congress president and her son Vikramaditya is an MLA.

I was very close to him (Virbhadra Singh); he had a vision (for the state) and had the welfare of the people of Himachal Pradesh close to his heart. That has now (under Pratibha Singh's leadership ) gone to the dogs.

The greatness (of the Congress in Himachal Pradesh) has finished (with Virbhadra Singh's death).

The state also suffers because of this putra-moh (motherly love for one's child).

Did you feel neglected by the state and central party leadership?

I gave up electoral politics long time ago to give way to new faces.

Now, (in the state) 80-plus people are getting tickets and the younger lot -- which is also becoming older lot now -- is nowhere in the picture.

How can you give tickets to people who are more than 80 years, and who have also lost elections before?

The Congress (in Himachal Pradesh) is relying only on older people and only those who have regularly failed to prove their popularity with the masses.

Are you blaming Rahul Gandhi singularly for the Congress debacle nationally as well as in the states?

Yes. Mr Rahul Gandhi is at the helm of affairs (of the Congress). Nothing moves without his consent.

I met him several times. But he always showed a casual approach. This (the state of affairs in the Congress) is the direct result of his casual attitude towards politics.

What discussions took place during your meetings with Rahul Gandhi?

No one can talk heart-to-heart with him. He is too casual. He lacks the seriousness of a politician. He is always on his mobile phone. Nobody can have a serious discussion with him.

I met him four-five times quite some time ago. I observed that he doesn't care for what one has to say. Ek kaan se sunte hai dusre kaan se nikal jati hai baat (he turns a deaf ear to whatever important one says). He is that casual.

Where action is needed, there is only inaction with the consequence that the Congress is fast disintegrating.

Bright and senior leaders like Ghulam Nabi Azad, Jyotiraditya Scindia, Kapil Sibal etc have left the party exactly because of this attitude towards politics.

One cannot contradict even a single issue that (Ghulam Nabi) Azad sahab wrote in his letter (to Sonia Gandhi). What role and responsibilities do you think the BJP will vest in you in Himachal Pradesh?

The (assembly) elections are due and I will work wholeheartedly for the BJP's success.

I have a big fan following in all the districts; I have been the Youth Congress president of the state for ten years, longest for any person in India.

I got tickets (when in the Congress) for my close associates; I got them ministerships.

I will soon be visiting the entire state and organise all my people, who are disillusioned with the Congress, in support of the BJP.

How many more people are likely to quit the Congress in Himachal Pradesh?

Many, many, more will quit soon. Two MLAs have already gone and more MLAs are on their way out.

I can't give the number, but they are already in touch with me.

I can't give you the numbers (laughs). This is confidential.

You will know when they will go (join the BJP).

Can we say a sizeable number of Congress MLAs from Himachal Pradesh are in touch with you?

You see, now even the BJP has also become very choosy. It is all pick-and-choose now. So, that is yet to be discussed. Am I speaking with Himachal Pradesh's future chief minister if the BJP comes to power in the forthcoming assembly election?

I have no ego and I have left the electoral race a long time back.

My life has been an open book and that's the reason I command so much respect in the state.

I work for all people of the state irrespective of their caste, creed, religion or political affiliations. Whoever comes to me I try to help that person.

Did the BJP approach you to join the party or it was your decision to go to the BJP?

It was mutual. When I saw all this hanky-panky money deals and how swindlers are taking probable contestants for a ride I decided to quit.

I have been successfully and loyally doing it for the Congress without asking for any power or money. And when I see what is happening in the state Congress I really feel very sad about how these people are looting my state.

Every leader (from the Congress) in every district of Himachal Pradesh now wants to become the CM. This has led to heavy infighting. So they (Pratibha Singh and her son Vikramaditya) are pushing their people to get tickets whether they win or not.

What would be your advice for Rahul Gandhi?

He should retire and not harm the Congress further.

How do you look at the election for Congress president?

Nobody knows who makes up the electors, where the electoral list is, or how they made it... it's a gigantic farce.

I have seen people becoming Youth Congress presidents by throwing money. Such posts are on sale in the Congress now and the highest bidder wins the post.

Everything happens behind closed doors. Nothing is transparent. It will be a big tamasha.

I can assure you the Congress will vanish from India and any number of regional parties will take its place. 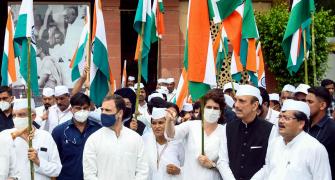 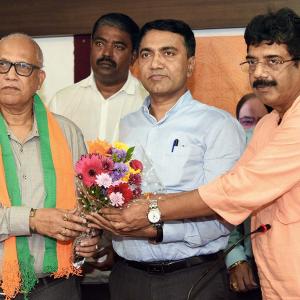