News
Business
Movies
Sports
Cricket
Get Ahead
Money Tips
Shopping
Sign in  |  Create a Rediffmail account
Rediff.com  » News » 'Loss of 2 seats in UP has frightened BJP in Karnataka'

'Loss of 2 seats in UP has frightened BJP in Karnataka'

'This is possibly a long drawn battle and if the Samajwadi Party and Bahujan Samaj Party are together in this long battle, a new political picture will emerge in the country.'
'In this battle if we have to sacrifice or give up anything, we are ready.'
'We have to remain cautious against the BJP's attempts to break our unity.'
'We want this alliance to stay.' The first of an exclusive, two-part, interview with Rediff.com's Archana Masih.

When you met Mayawatiji in her home after the by-poll victories -- after how long were you meeting her?

Honestly, it was the first time I went to her house. I have met her many times in the House and in functions.

I went to personally thank her because it was a big win.

My happiness would have been incomplete if I had not thanked her.

Did you sit down and have tea or just returned after presenting her a bouquet?

Even if I came to your home, I am sure you will offer me tea.

She is such a big leader and we had won a great victory, so I had tea, pakodas, mithai.

To tell you the truth, it was after a very long time that I saw such mehman nawazi (hospitality).

The Opposition seems to win by-elections, but the BJP trumps them in the big elections? Why is that?

See how the BJP national president's language has changed in Karnataka.

The loss of two seats in UP has frightened the BJP in Karnataka.

Our chief minister was visiting Karnataka a lot, but we Samjwadis have put a brake to those visits.

Please note that the BJP's campaign in Karnataka was started by him. I don't think our CM will be able to go to Karnataka now.

How has your outlook changed after the by-poll victories of Gorakhpur and Phulpur?

My outlook is the same. I had to learn some things from the BJP (laughs).

We had fought the assembly election last year based on our development record and development schemes.

Many people used to ask what is your narrative if you have to fight the BJP? The BJP has many organisations under its umbrella that take its message to people on the ground.

The by-poll election provided us with a narrative.

The BJP's formula in the UP election was caste and religion. We in the Samajwadi Party can say that our message will be about progressive development and social justice.

Perhaps it is these two issues that will sustain us in UP and in politics.

But social justice and development have been on your agenda even in the past, what is new about these issues?

It was there, no doubt -- as chief minister, I made India's longest and best expressway, metros in 4, 5 cities, introduced world class police reform system, but I did not have the glue or Fevicol.

Now I have the glue and the Fevicol with which I can draw people to us, make them join us.

Social Justice. Kisan. Jobs for youth. This is the glue.

The coming together with Mayawatiji and the victory in the by-poll, coupled with the selection of candidates, helped us.

We gave the ticket to the son of the leader of the Nishad Party which had its own community support base.

We told them that your individual battle is a long one, but if your son joins us, you will win this battle.

We brought in Dr Sanjay Nishad's son into our party, we took the support of 30 other parties including the party representing the small Bind Samaj, Left parties. Even the NCP (Nationalist Congress Party) supported us.

And we got the support of Mayawatiji.

This resulted in building a force against communal forces.

Please note the language of our chief minister.

On the floor of the House, a chief minister says I am proud of being Hindu and I don't celebrate Eid.

You take your oath as CM in the name of god to protect the Constitution and look at the statements you make in the House.

So arrogant is the BJP that it does not acknowledge anyone else. They called us saap aur chachoondar (snake and mongoose) -- this is their language of arrogance.

They did not care about people's sentiments and the people of Gorakhpur and Phulpur taught the BJP a lesson.

Our margin of victory may have been a few thousand (votes), but if you see the difference from the last election, it shows that lakhs of people are upset with the BJP.

When Yogiji said he is proud to be Hindu, in your reply you asked: 'Am I not proud?'

I said am I not a Hindu?

I said I want to thank the BJP that they think of me as a backward Hindu -- at least they have told me that I am a backward.

You called yourself a progressive backward Hindu.

Yes, and before that I said that I was building expressways, metros and distributing laptops -- so I thought I was forward, but I want to tell the BJP members that I am a progressive backward.

Why have leaders like you who never proclaimed their Hindu-ness before started doing so now? Has the 'pro-Muslim' tag become a liability?

They used to accuse us of Muslim appeasement and by talking about Hindus the BJP is appeasing Hindus.

They used to accuse us that we want to make the Muslims happy. The BJP's strategy is to use this language to create a negative sentiment about us.

Hamre toh Krishna bhagwan hai (Lord Krishna is our God). I told the BJP that the avatars of Vishnu are Ram and Krishna. I am speaking to the BJP in their own language.

I still say that when we come to power again we will continue to build expressways and distribute laptops, but till then we have to respond to them in their own language.

A few days ago Soniaji (Congress MP Sonia Gandhi) also said that her party comprises of mostly Hindus. Has it become a requirement to say this now?

It is not a requirement, but it needs to be conveyed to the BJP.

The BJP mind needs to know that we are also like them, they want to portray us as being different.

Do you think this will alienate Muslims who support your party?

Bilkul nahi! Joh Krishna bhagwan ko manta ho us se koi naraz nahi ho sakta (Not at all! No one can be upset with a Lord Krishna devotee).

No Muslim will be upset with one who worships Lord Krishna.

Is your alliance with the BSP a done deal for 2019?

This is not a deal. The nation wants a road map and we have chartered a new course.

If I am correct -- once Dr Ambedkar wanted to meet Ram Manohar Lohiaji. Dr Lohia wanted both of them to fight the political battle together.

Maybe a new path has opened up in UP. As we set course on this new path we say we are no different from anybody, nor do we want to upset anyone.

We want whatever is due to us under the Constitution.

The BJP talks about Digital India. Till now ATMs, cars, bikes, banks used to be burgled, but the BJP people are robbing your data.

These robbers of data who want everybody to be linked by Aadhar, I say to them count us in and give us our rights and dignity based on our population as stipulated under the Constitution.

This is possibly a long drawn battle and if the Samajwadi Party and Bahujan Samaj Party are together in this long battle, a new political picture will emerge in the country.

This is not a deal. The two parties have come together to chart a fresh course in the politics of this country.

What effect has the BJP's defeat in the UP by-polls had?

People did not expect that the chief minister would lose his seat, that the deputy CM would lose.

These two lost and see how the BJP national president's language changed in Karnataka.

He forgot his own CM candidate's name and what he was saying about whom!

Mayawatiji is a seasoned leader with a committed voter base. She is said to be difficult to get along.
As the younger person in this alliance, what are the challenges for you in ensuring that your parties remain united?

Whatever may have been said about Mayawatiji, in this battle, she is straightforward. Our goal is a big one. Our goal is to defeat the BJP because the BJP has defeated us.

It has betrayed the people of UP.

They have made us casteist, thrown us into a pit of hate.

In this battle if we have to sacrifice or give up anything, we are ready.

We have to remain cautious against the BJP's attempts to break our unity. We want this alliance to stay.

Why should I be nervous? The ideas are the same -- to improve the life of the poor.

If we can make a difference to those who are ignored, what can be a better sense of happiness for the SP and BSP?

In ten years time the country's population will be 150 crores (1.5 billion people). It would mean that 100 crore (1 billion) Indians will not have employment.

Look at what our country has come to? The prime minister has visited 48 countries. Tell me if any farmer has committed suicide in any of these 48 countries.

If we can contribute to the building of the nation, it will be our biggest victory. 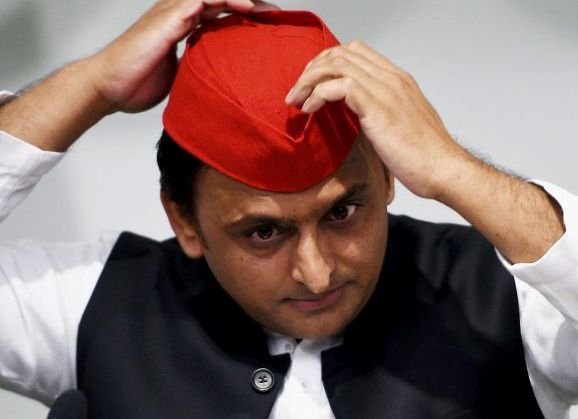 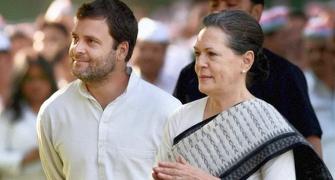