'One provision in the Act -- immediate arrest (of those accused under the Act), made this Act different from all other sections of the IPC.'
'With that provision snatched, the Dalit Act has become toothless because caste criminals feared this provision of immediate arrest the most.' 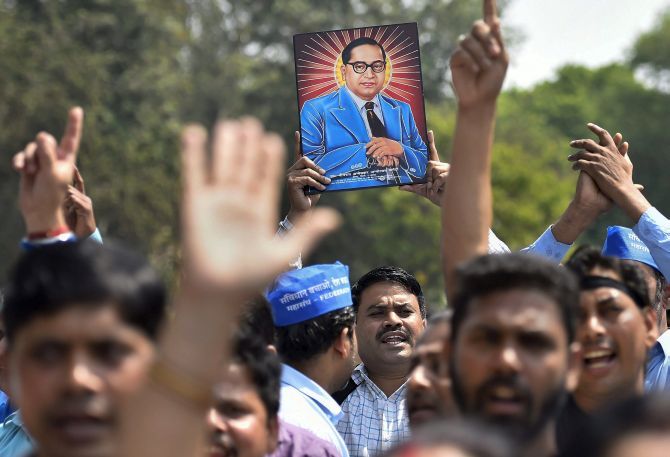 Why are the Dalits so angry?

What led hundreds of young Dalits to march on north India's roads to protest the Supreme Court's decision on the Scheduled Castes and Scheduled Tribes (Prevention of Atrocities) Act on Monday, April 2?

Rediff.com's Archana Masih turned to Chandrabhan Prasad, the well-known commentator-thinker-entrepreneur and adviser to the Dalit Indian Chamber of Commerce, for answers.

How will the new provision in the SC/ST Act impact the life of a Dalit?

One provision in the Act -- immediate arrest (of those accused under the Act), made this Act different from all other sections of the IPC (Indian Penal Code).

With that provision snatched, the Dalit Act has become toothless because caste criminals feared this provision of immediate arrest the most.

Dalits will find it harder to defend their dignity.

The April 2 protest saw various Dalit groups coming together. It was not headed by a leader, but was a spontaneous show of strength. What are the reasons for this anger?

Dalits -- in particular, those that are just freeing themselves from caste control -- face caste slurs in their day to day life.

They were jolted with this judgment and anger followed.

In your personal experiences, from your meetings with young Dalits -- can you give us a sense of how the life of a young Dalit in India has changed?

Post 1950, India has changed much. Dalits can now wear new clothes even in villages.

Dalit grooms can ride horses even only for few hours.

Dalits can now refuse to work for caste landlords.

They can now enter universities.

Caste society was unprepared to see this kind of Dalit.

Dalit youth are unsettled by this open denial of their right to dignity.

You have highlighted successful Dalit entrepreneurs. How much harder is it for a Dalit to start a business than a non-Dalit or someone from a higher caste

It is harder for Dalits to launch businesses, but hardest to turn bigger as it is here you are noticed, it is here you need bigger capital, bigger markets.

Market and credit are the biggest hurdles as Dalits are new in this field of enterprise.

Upper castes have it easier as they can spot their caste men both in the markets and the banking system.

Almost a decade ago the government mandated that 4 per cent of all its purchases should come from Dalit businesses. Did that help or is that just tokenism?

No government has followed it up. There is no serious directive yet to come to a Dalit beneficiary.

What difference has the Stand-Up India scheme of 2016 to provide easier loans for Dalits and women made?

Not much, the credit guarantee scheme is a complete failure.

How has the emergence of young Dalit leaders like Jignesh Mevani and the Bhim Army's Chandrashekhar changed the Dalit movement, especially for Dalit youth?

Mevani is a unguided missile. When the world has moved so much, he is tied to 'Land for Dalits. He speaks more than he knows.

He hasn't learnt that Dalits don't succeed in the countryside.

Yes, Chandrashekhar looks promising, but we have to hear more from him.

Are they the new faces of the movement? Are they taking away the battle for Dalit rights from veterans like Mayawati?

Space has been created for young players, the established Dalit leadership seems to be decaying. Who will fill the blanks is yet to be seen.

The farmers's march to Mumbai caught the nation's imagination and was praised for its dignified, non-violent, nature. The Dalit protest of April 2 resulted in violence, arson and 11 deaths.
Has violence marred the Dalit cry for justice? Why could it not have been a peaceful protest?

Why weren't the protests violent in Delhi, Punjab?

There is proof of upper caste firing guns, Dalit marchers being attacked according to the UP police. Non-Dalit criminals had infiltrated Dalit marchers in Meerut.

The media cameras saw only the smoke side of the protest, and not the roses that I could see at Mandi House, Connaught place, Jalandhar, Ludhiana and elsewhere.

The media is yet another caste republic, most anchors are upper caste supremacists. 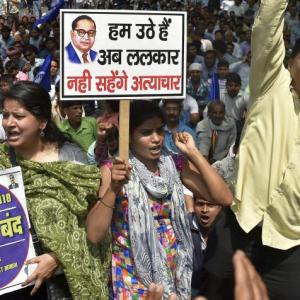