News
Business
Movies
Sports
Cricket
Get Ahead
Money Tips
Shopping
Sign in  |  Create a Rediffmail account
Rediff.com  » News » 'There is a Brahminical resurgence' 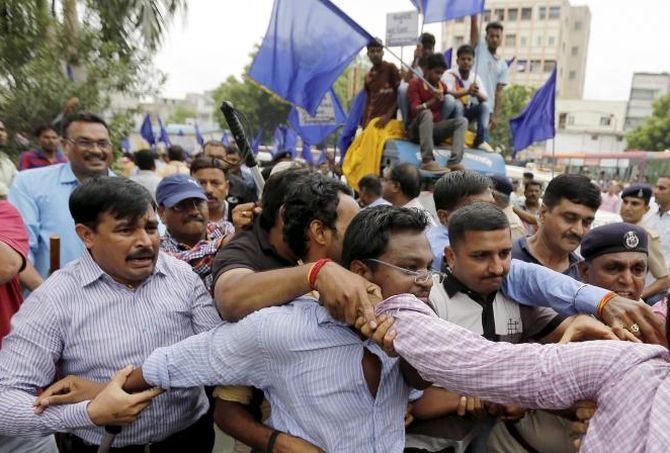 Image only published for representational purposes.

Bhima-Koregaon near Pune witnessed tension and violence this year when Dalits, like they have done for many years now, congregated at the site of the battle between the East India Company and the Peshwa's forces exactly 200 years ago.

Aiding the British in the battle of Bhima-Koregaon were the Mahars, a Dalit community who claim the victory against the Peshwa empire as their own and commemorate it every year.

This year, events took on an added edge with Jignesh Mevani, the newly elected Dalit MLA from Gujarat, visiting the site, incorporating a Jay Stambh or victory memorial, to pay tribute.

Violence broke between those marking the victory over the Peshwas and those protesting the commemoration, in which one person was killed.

The Battle of Koregaon on January 1, 1818 marked the last confrontation between the Peshwas and the British, and brought about the end of the Maratha empire.

Dalit intellectual Dr Anand Teltumbde does not share the Dalit perception about the significance of the Koregaon battle for Dalits, or its contemporary relevance.

"Who is the fool who can claim that caste oppression was not there in India!" Dr Teltumbde tells Rediff.com's Syed Firdaus Ashraf.

Why is the bicentennial of the British victory over the Peshwas so significant for the Dalit community, and why are they celebrating it?

As a matter of fact, I don't know. There is nothing that happened. They (the Dalits) fought the war for the ruling powers (the British) and there is nothing significant.

What was that war about?

Every history book records that 1818 marked the last Anglo-Maratha war. That was the last battle they fought.

The Peshwas were reduced to weaklings by that time and they were not in (power in) Pune too.

They were trying to regroup their soldiers and attack Pune again with a big unit.

A small battle was fought there and that was the end of the Maratha empire and the rise of the British empire.

The Mahars were dominant in the Bombay Infantry of the British army, but that does not mean they were in a majority.

Out of 49 men, 22 men were identified as Mahars. So one cannot construe that they fought for caste and this (view) is total distortion.

Was discrimination against the Dalits common in the Maratha empire?

Of course. That was the societal factor.

But that does not mean that the Mahars reacted in the battle the way it has been coloured.

Can you cite examples of what kind of discrimination the Dalits faced under the Peshwas?
Some say the Dalits had to hang a pot around their neck to spit in and tie a broom around their waist to sweep the ground as they walked to remove the so-called impurities.
Is that true?

These are all folklore. Dalits could not cross streets or sit by the roadside. These things have been spoken about.

I have not gone though any historical evidence about this in any book or papers.

Who is the fool who can claim that caste oppression was not there in India! It was there.

By calling it folkore, are you saying that the discrimination against the Dalits was exaggerated?

It must have been there because it was purely Brahminical rule (under the Peshwas).

Even today that is happening. That is the truth.

They will try to reinforce their rule and power as they were out of power for some time.

These things keep happening, but to say that because of that (discrimination against the Dalits), this (the 1818 war) happened...

Dalit intellectuals whom I read said the arrival of the British was good for Dalits as Lord (Thomas Babington) Macaulay introduced the English language and uplifted the Dalits' status in Indian society. Is it true?

That (theory) is totally nonsense. All these kind of things are getting distorted in identity (politics).

Lord Macaulay brought the English language for his colonial logic and colonial gains.

This is a known fact, but I don't know why people don't read and understand this logic.

Do you think a Brahminical order is resurgent in contemporary Indian society as witnessed in the Peshwas' time?

There is a resurgence of some kind (of a Brahminical order).

It is not, however, happening in the same manner as it was happening during the time of the Peshwas.

Whatever happened during the Peshwas cannot happen now.

But there is resurgence. They (Brahminical forces) are trying to recreate the same situation.

What kind of oppression do Dalits face now?

Can't you see? Lynchings are happening.

Not only Dalits, but any poor person cannot dissent. They cannot stand before (the State). They are suppressed ruthlessly.