‘Neither the prime minister nor the party president ever asked me to join the BJP.’ 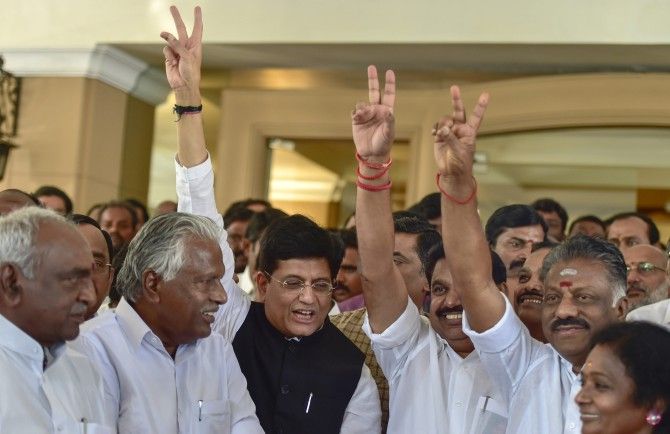 IMAGE: Union Minister Piyush Goyal with senior leaders of the AIADMK and the BJP, including Tamil Nadu Chief Minister Edappadi K Palaniswami and his deputy O Panneerselvam, after the two parties joined hands for the 2019 Lok Sabha elections. The AIADMK-BJP combine were left red-faced after being able to bag only one Lok Sabha constituency. Photograph: PTI Photo

Dr Vasudevan Maitreyan was virtually the face of the All India Anna Dravida Munnetra Kazhagam in New Delhi, ever since party supremo Jayalalithaa nominated him to the Rajya Sabha for the first time in February 2002.

Having spent 14 years in the Rajya Sabha, he was considered the AIADMK's main interface with the national parties.

However, Maitreyan’s stars seem to have altered their alignment with the passing away of Jayalalithaa in December 2016.

Realising he may not get another RS nomination, he asked the new party leadership of Chief Minister Edappadi K Palaniswami and Deputy Chief Minister O Panneerselvam for a Lok Sabha ticket for the 2019 elections but was denied.

And, as he had expected, he was also not renominated to the Rajya Sabha.

Now back in Chennai, Maitreyan, an oncologist, is still waiting for answers as to why he has suddenly fallen out of favour.

What hurt more than not being renominated as a member of Parliament, he tells Saisuresh Sivaswamy/Rediff.com, is the fact that the party leadership did not feel the need to inform him of their decision.

“If even that kind of (courtesy) is not extended to you, you will definitely feel bad,” he says.

Why do you think you were not renominated as a member of the Rajya Sabha this time?

I had been nominated to the Rajya Sabha for three terms by Madam (Jayalalithaa).

In fact, I am the only person from the AIADMK to have been nominated by Madam for three terms. It was a unique honour she gave me.

In her absence, in the present prevailing political situation, I myself feel I would not have had a chance to have a fourth term.

Why do you say so? Is it because you have fallen out with the new regime of EPS-OPS, or is there any other reason?

It’s a question of that.

As I said, in the absence of Madam, there are so many other political compulsions and reasons which might have necessitated them to take that call.

That’s why, sensing that I may not get the Rajya Sabha renomination, I had expressed my desire to contest the Lok Sabha elections.

Unfortunately, I was not given that opportunity also. They didn’t give me a seat to contest the Lok Sabha (election) or renominate me to the Rajya Sabha.

Not getting it is definitely a matter of... What should I say, I felt… hurt. More.

That feeling of hurt may be there for a couple of days, a week or 10 days, and then it will pass away.

What is more important, and what definitely left a lasting feeling of hurt in my heart, is that a person who has been an MP for 15 years, a person who was chosen by Madam for three terms and has been her voice in Parliament... the present leadership did not even have the basic minimum courtesy of calling me and telling me that, due to various reasons or compulsions, we are not able to accommodate you this time, we will see some time later.

If even that kind of (courtesy) is not extended to you, you will definitely feel bad. 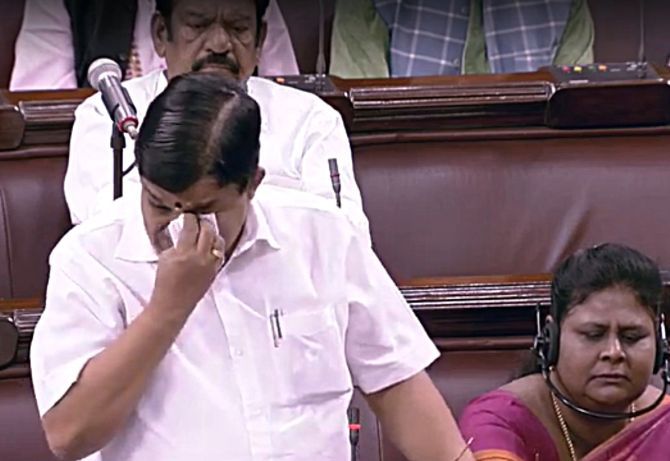 IMAGE: Dr Maitreyan breaks down in the Rajya Sabha during his farewell speech on July 24, 2019. Photograph: ANI Photo

Why do you think this was done?

As I said, the present prevailing political compulsions.

More than that, it’s for the party leadership to answer your question.

When Jayalalithaa was alive, were you on cordial terms with the present leadership?

The reason I asked this is: Could there be some incident from the past for which you are being paid back now?

Definitely not. As long as Madam was there, I don’t remember any such situation at all.

You had spent so many years in Delhi as the voice of the AIADMK, cultivating ties across the political spectrum. Will your replacement be able to step up to the task?

Nobody is indispensable. The other people may take more time to cultivate, or not; it is a question of trial and error.

After returning to Chennai, have you tried talking to the party leadership?

I don’t think there is any reason for me to talk to them because the thing is over. So what is there for me to go and ask?

New responsibilities in the party, maybe?

It is for the leadership to tell me. 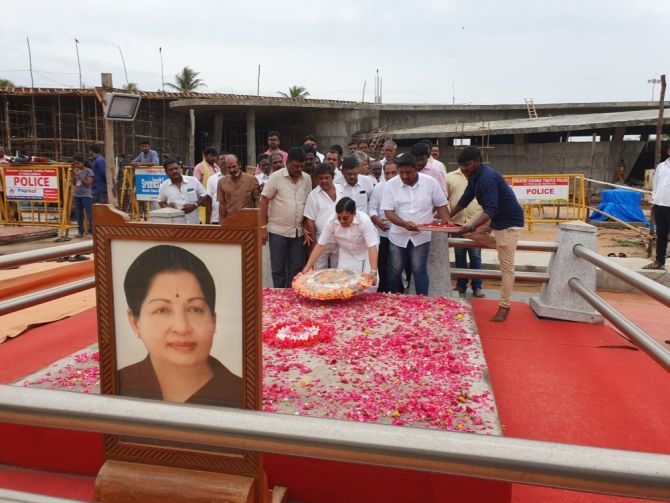 IMAGE: On returning to Chennai, one of the first things Dr Maitreyan did was to pay homage at the samadhi of former chief minister Jayalalithaa who nominated him to the Rajya Sabha for three terms. Photograph: Kind courtesy Dr Maitreyan/Twitter

So what are your future plans?

I am basically an Amma loyalist, I joined this party 20 years ago only because of my affection for Madam and my loyalty to her.

I continue to be an Amma loyalist and I expect to carry on the work that is given to me.

Do you get the feeling that Jayalalithaa loyalists are on the back foot within the party now?

After Madam’s death came the transition period. It will take a few weeks or months or years for the present leadership to take their position. So I won’t like to comment on that at the moment.

There has also been a lot of speculation that, since you have been in Delhi so long, you may be joining the Bharatiya Janata Party.

Number one, at no point of time did the prime minister (Narendra Modi) nor the party president (then Amit Shah) ever ask me to join the BJP.

Number two, knowing the present political situation in Tamil Nadu, the ground realities of the political atmosphere, the BJP has very little play in Tamil Nadu.

I don’t think I will think about it.

Were you happy when the AIADMK tied up with the BJP for the Lok Sabha elections, because Jayalalithaa kept the national parties on a tight leash?

There is no other alternative, is there, at this point in time?

As a veteran leader of the party, are you happy with the new leadership of the AIADMK?

It is not a question of my being happy or not happy.

We have leaders. If we decided to have coordination, joint coordination… it is for the leadership to carry along everyone in the true spirit of cooperation and see that the ideals for which Amma had spent her lifetime are fulfilled.

Has the current leadership managed the period of transition after Jayalalithaa’s passing away?

As I said, we have had a series of crisis situations. One by one, they are trying to overcome that.

Let’s see how the future turns out.

Tuesday’s decision to walk out of the Rajya Sabha during the debate on the instant talaq bill and thus not be present for voting -- were you happy with the decision?

That was the decision taken by us.

It has been our consistent stand that we are opposed to certain provisions of the triple talaq bill.

We raised it in Lok Sabha during the last Parliament, and after this new government has taken over, the bill introduced did not address the issues which were raised by us.

I knew that we will oppose it.

Don’t you think being inside the House and voting against the bill would have been a better alternative since now, because of absences, the bill you are not happy with has been passed?

Look, there are ways of expressing our position.

Speaking against the bill and abstaining inside the House is another option.

Speaking against the bill and walking out is the third option.

We chose the third option.

Critics say that, by walking out, the Opposition has actually helped the government since it brought down the numbers required for a majority.

It is an interpretation by the critics, that’s all.

So you are happy with the decision?

Naturally. This is what we had done in the Lok Sabha previously too.

The Dravida Munnetra Kazhagam and its allies did very well in the recent Lok Sabha elections in Tamil Nadu, sweeping 37 of the 38 seats that went to polls. Is that a cause of worry for you ahead of the 2021 assembly elections?

It is definitely a cause for worry because, unlike in the AIADMK where, after Madam’s death, there has been a crisis and the leadership has evolved, the succession in the DMK was a foregone conclusion -- that M K Stalin would take over.

So it is a formidable front.

In politics anything can happen in 24 hours.

Nobody ever thought 10 days ago that the H D Kumaraswamy government will fall. 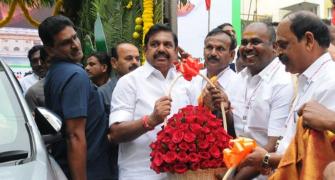 EPS does a Jaya but like her, can he keep the BJP at bay? 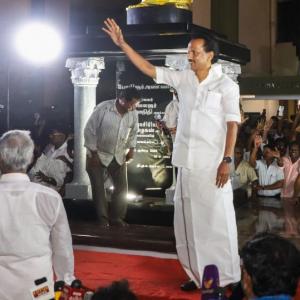