News
Business
Movies
Sports
Cricket
Get Ahead
Money Tips
Shopping
Sign in  |  Create a Rediffmail account
Rediff.com  » News » 'The BJP is not coming to power in Assam'

'Everything was sacrosanct when the BJP was led by Vajpayee and Advani.'
'That was a different culture. But with Modi and Amit Shah nothing is sacrosanct.' 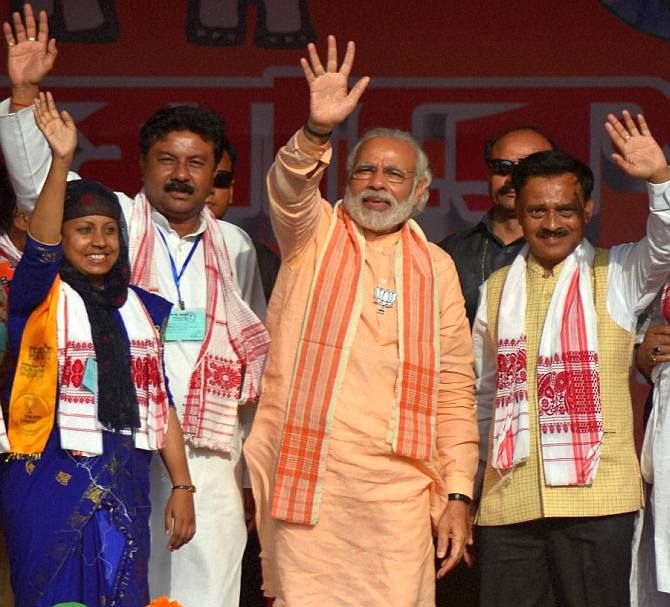 "Remember that picture of Narendra Modi taking stock of the flood situation in Chennai or the one which was in circulation where Modi was sweeping the floor that surfaced just before the May 2014 Lok Sabha election?"

"Any other self respecting politician would have fired his media head responsible for such photoshopped pictures, but this man (Narendra Modi) didn't utter a word, which means that the act had this man's sanction."

"No self-respecting person would get his images photoshopped and flashed the world over. So, what kind of politics is he practicing?"

Prodyut Bora, an IIM-A alumnus, who worked with the Bharatiya Janata Party for 11 years before resigning from its national executive, calling its national president Amit Shah 'arrogant' floated the Liberal Democratic Party in Assam, which contested 14 seats in the Assam assembly election.

Bora, (seen, below), who contested two seats from Jorhat and East Guwahati, spoke to Prasanna D Zore/Rediff.com about the election scene in his home state.

How many seats will your party win this election?

I think we will open an account. We barely started our party a year ahead of the polls and we started from absolute scratch.

We are not a movement-based party like the Anna Hazare movement, which led to the formation of the Aam Aadmi Party.

These 14 seats are spread all across the state and why only 14? Because we had three filters that we wanted every candidate to pass through to be able to get the LDP's candidature.

The three Cs through which we filtered all the candidates are: Character, Capability and Commitment to social causes.

And we could find only 14 who could satisfy all the three Cs.

How much money did your party spend to contest your debut election in Assam?

The party is not funding anybody. All these 14 candidates are self-funded. We have requested all our candidates to run a very frugal campaign.

We strongly believe that throwing money to win elections doesn't bring out success and the elections in Bihar and Delhi has amply proved it.

Also, creating media hype does not translate into votes.

(Prime Minister Narendra) Modiji tried both these things in Bihar and Delhi, but failed to win the people's trust.

We told our candidates that the times are changing and not to depend on conventional ways of contesting elections using money and media hype.

We advised them to be frugal and all of them ran a very frugal contest.

We formed a dance group in Assam to spread the LDP's message, calling it 'Dance For Democracy.' This dance group really helped us connect with young voters in Assam.

A very young group of college students took our message for integrity and morality in politics across the state through the Dance For Democracy initiative.

How do you read the election scene in Assam? Who do you think will emerge the single largest party?

Let me tell you one thing: The BJP is not coming to power in Assam for sure.

Beyond that, this is an open question and all kinds of permutations and combinations will be thrown up after the election.

But the BJP with such an opportunistic alliance will be rejected by the people.

Who are you calling the opportunist here: The Bharatiya Janata Party or the Asom Gana Parishad?

At every given opportunity the AGP would criticise the BJP and still they go ahead and form an alliance with the BJP and then they (the AGP) call off the alliance saying they (the BJP) do not treat them with honour.

Then, just a week after that, they once again formalise their alliance.

If this is not opportunistic behaviour, then what is? All these games are going on in full public glare.

You saw what happened in Bihar. Narendra Modi tied up with (Upendra) Kushwaha (of the Rashtriya Lok Samata Party and is a minister of state in the Narendra Modi government) after breaking up with Nitish Kumar's JD-U (Janata Dal-United) in Bihar also in a clearly opportunistic way.

The BJP thought that Kushwaha will get all the OBC and SC votes into their kitty. But did that happen? And then they got in (Asaduddin Owaisi of the All India Majlees-e-Ittehadul Muslimeen) Owaisi from Hyderabad. These are all opportunistic games, but the electorate is not fools.

How many seats do you think the BJP and Congress will win in Assam?

Why do you want me to play the role of an astrologer?

I have read the election scene in Assam, but I would rather keep the numbers to myself.

But I can say this with confidence that the BJP is not coming to power. And, like in the past, the Congress will cobble together yet another opportunistic alliance (to stay in power).

Are you suggesting an alliance between the Congress and Badruddin Ajmal's All India United Democratic Front in case no party comes up the winner?

If a party like the BJP, which was formed to oppose Article 370 (which gives special status to the state of Jammu and Kashmir) can sew an alliance with Mufti Mohammad Sayeed's People's Democratic Party to share power in Jammu and Kashmir, what will stop either the Congress or the BJP to tie up with the AIUDF to share the spoils of power?

You are hinting at the BJP and AIUDF coming together in a post poll hung assembly scenario.

My goodness! Tell me one thing.

Dr Syama Prasad Mookherjee started the Jan Sangh on just one issue: Abrogation of Article 370 and opposing Nehru's special status to Kashmir via this Article. In all its 65 years of existence as the Jan Sangh and BJP they have opposed Article 370 tooth and nail. And now they are in an alliance with the PDP which is an open supporter of Article 370.

Will the BJP not show the same opportunism in Assam? You tell me!

A party which is formed in response to Article 370, which they still consider an article of faith, and they go ahead and tie up with the PDP in Kashmir.

So, nothing is sacrosanct when it comes to sharing power?

Everything was sacrosanct when the BJP was led by (Atal Bihari) Vajpayee and (Lalchand Kishenchand) Advani. That was a different culture. But with Modi and Amit Shah nothing is sacrosanct.

How has this culture changed under Modi and Amit Shah?

Power hungry people do it all the time.

If you can photoshop your picture... Remember that picture of Narendra Modi taking stock of the flood situation in Chennai or the one which was in circulation where Modi was sweeping the floor that surfaced just before the May 2014 Lok Sabha election?

Any other self respecting politician would have fired his media head responsible for such photoshopped pictures but this man didn't utter a word, which means that the act had this man's sanction.

No self respecting person would get his images photoshopped and flashed the world over. So, what kind of politics is he practicing?

Do you see the AIUDF playing the role of a kingmaker as many in the Congress and BJP are now discussing in hushed tones?

Since you are asking me, let me tell you that the AIUDF is not really a political party.

The AIUDF is a cover to protect the business interests of a particular individual.

Badruddin Ajmal runs a perfume empire, which pretty much is a cash business. And this business needs the blessings of the party in power in Delhi.

He would have had a deal going with the Congress were they in power at the Centre.

Now, since the BJP is in power he will have a deal with the BJP. 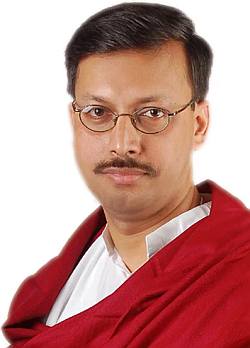 Do you think the AIUDF will be the kingmakers in Assam?

I doubt it because Badruddin Ajmal is losing in stature. In the last three elections he has just created the fear of god within the immigrant Muslim community by making them feel insecure about their safety under the Congress or the BJP.

But didn't Amit Shah promise at rally after rally that if the BJP came to power in Assam, it will not even let a bird fly from across the border?

The more Amit Shah makes such kind of statements, he gives people like Ajmal a chance to go to immigrant Muslims and make them feel insecure and unsafe just so that he gets their votes.

Ajmal is already saying the BJP at the Centre is bad enough and if they come to power in Assam then these immigrants would have it.

You can win elections by communalising the atmosphere once, twice or thrice, but after that the law of diminishing returns catches up with you.

I think the AIUDF's strength in the Assam assembly would reduce instead of increasing.

Post the election results, whatever the number of seats you win, you will not ally with either the Congress or the BJP?

We don't want to (ally with either party).

You don't want to, but will you succumb to political compulsions after the election results are out and there emerges a chance for the LDP to be part of the government?

There is no political compulsion in front of us.

Nobody has grown by being part of the Congress or the BJP. We will be part of the Opposition and we will perform the role of a strong Opposition.

One day or the other people will accept us.

Through the '80s and '90s the BJP, before Atalji became prime minister, played the role of a strong Opposition in Parliament despite its small presence. Later, people wanted an alternative and voted it to power.

That's the role democracy plays: You prove your role in the Opposition first and then people do consider you for being in the government. 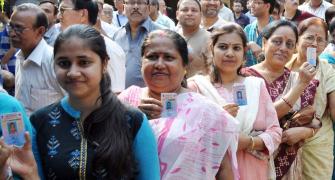 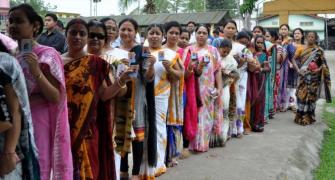 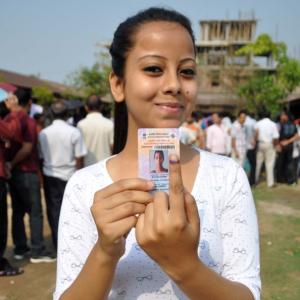 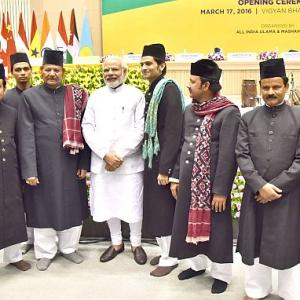