'The BJP and RSS were working on the ground to define who is an illegal immigrant.' 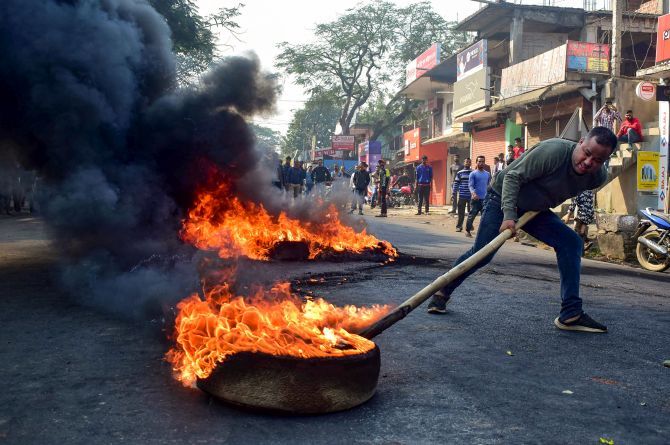 IMAGE: A demonstrator burns tyres on National Highway 17 during a protest at Boko in Assam's Kamrup district. Photograph: PTI Photo

"They (the BJP/RSS) realised that this was not a communal thing and it's not going to help them. It's community versus community. So they had to really work on the ground to change the narrative and try and define a popular image of who is an 'illegal Bangladeshi'," Sangeeta Pisharoty, author of Assam: The Accord, The Discord, tells Rediff.com's Utkarsh Mishra in the final segment of a three-part interview.

The data that you quote in the book show that an overwhelming majority of refugees entering India during 1971 were Hindu Bengalis. It should not come as a surprise then that most of the 19 lakh people excluded from the final NRC are non-Muslims.
But nobody seems to be satisfied with the NRC. Is it because it goes against a particular narrative that is sought to be created?

I had written a story in The Wire some time ago about why the BJP won in 2016 in Assam. It was mainly due to the non-implementation of the Assam Accord by the Congress for a long period.

The BJP and the RSS (Rashtriya Swayamsevak Sangh) were working on the ground to highlight the delay and also try and define who is an illegal immigrant. They helped popularise the idea of a typical illegal immigrant as a 'topiwala', lungi-clad, land hungry Muslim.

This was, even though the initial trigger for the fear against the outsider or bohiragata among the Assamese was due to Bengali Hindu refugees streaming in from East Pakistan during the face-off between the Mukti Bahini and the Pakistani army.

I quoted a border police DSP who told me on record that he met some RSS workers at that time and they told them to spare Bengali Hindus. He said I'm not going to do that.

They (the BJP/RSS) realised that this was not a communal thing and it's not going to help them. It's community versus community. So they had to really work on the ground to change the narrative and try and define a popular image of who is an 'illegal Bangladeshi'.

That the Congress didn't implement the Assam Accord, the main clauses of it, gave the RSS and the BJP the leeway to create that image of the 'other', and the 'other' suddenly became only the Muslim.

But at the people's level, the 'other' have been both.

Interestingly, as I moved around the state during the update of the NRC, I realised that there were more Hindus who have (been excluded from the NRC). 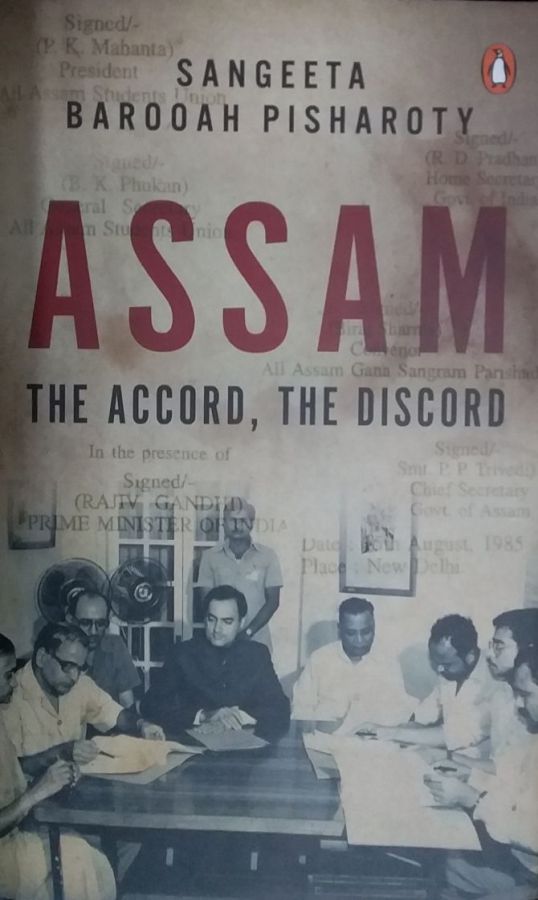 But a major part of the national media only looked at the NRC as an anti-Muslim exercise for a couple of reasons. One, some thought that Bengali Hindus will be saved by the BJP which is in power. The Bengali Hindus in Assam are also its major vote bank.

And two, the Bengali Muslim community -- I mean their origin may be Bengali but it's better to call them 'Miya Musalmaan' because they speak Assamese too -- felt that the BJP is never known for being friendly to us.

So we have to really beat our drums now and say that we are suffering, we are only being sent to detention camps in a BJP ruled state. A section of media savvy youth particularly played that role.

But I have visited some detention camps and have actually found equal number of Bengali Hindus in such camps, if not more.

Since 2017, I've been writing that there are more Bengali Hindus going to be found (outside the NRC) than Muslims.

The Bengali Hindu community also kept quiet because they had bitten into this BJP's promise (of the CAA).

They came out only when they saw that they might have to now go through the process of proving their citizenship at foreigners tribunals.

What is intriguing about the NRC is the fact that there are a few cases where such people are excluded whose parents's name appears in the list. Doesn't the law say that children born out of Indian parents will be Indian?

Yes, till July 1987, anyone born in India can be a citizen. After that, the Citizenship Act was enacted which required that at least one of the parents have to be Indian.

Then came another amendment that none of the parents can be an illegal immigrant.

So, all these amendments must have been take into consideration while updating the NRC.

So children who may be out could be because they had claimed their family legacy from a parent who may have been declared a foreigner by a tribunal etc. or is fighting such a case.

Whatever the nature of demographic change in Assam be since 1951, the fear that the Assamese people will lose their control over the state's politics has never really been realised. Do you think the fear is proved to be unfounded?

The fear is there. It is also ignited by political forces.

The BJP talks about demographic change of the state caused mainly by the Muslims of East Bengal/East Pakistan origin.

Of course, their population has risen in Assam, but it is being linked to only illegal migration. But there are so many other factors behind it.

The rise in population is happening among the tea tribe also, probably for similar reasons. But we don't study those reasons.

What bearing will the Naga Accord have over the situation in Assam?

The Naga Accord will have to keep out Assam, completely. After initially trying to tinker with it, I think, the government has realised that it can't do so.

Utkarsh Mishra covers politics for Rediff.com. He can be contacted at utkarshm@rediff.co.in.