News
Business
Movies
Sports
Cricket
Get Ahead
Money Tips
Shopping
Sign in  |  Create a Rediffmail account
Rediff.com  » News » L K Advani: 'Whoever forms the government doesn't hesitate in committing excesses, even some of our people'

L K Advani: 'Whoever forms the government doesn't hesitate in committing excesses, even some of our people' 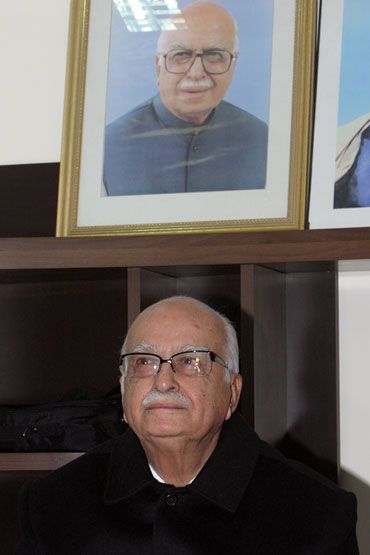 Do you think the issues during the Emergency are relevant today?

The Emergency is a significant event in India's history. It highlighted the Congress party's level of commitment to democracy, freedom of the press and all the other attributes regarded as imperative for a sound democracy.

It was amazing to see that just to undo a court order (On June 12, 1975, the Allahabad high court found then prime minister Indira Gandhi guilty of corruption in the 1971 election), the ruling party could go to this length to put all Opposition leaders in prison, arrest 100,000 people and completely destroy the freedom of the press.

Those 19 months were shocking. I think if there was no Emergency, there would not have been 1977. We didn't anticipate 1977. We were thinking of contesting the 1976 general election after winning the election in Gujarat in 1975.

In 1975, immediately after our win in the Gujarat election and after the Allahabad high court verdict -- the two events that really made the Congress party impose the Emergency -- we had fixed our national executive meeting in Mount Abu from June 15 to 17.

Dr Vasant Kumar Pandit, a renowned professional astrologer, was one of our executive members. Dr Pandit was a member of the Maharashtra legislative council for 18 years and a member of the Lok Sabha from 1977 to 1984 from Madhya Pradesh.

I am cynical about astrological predictions. But I can never forget the brief chat I had with Pandit. Relaxing after lunch on the second day, I happened to ask him, 'Panditji, aap ke nakshatra ab kya bol rahe hein? (what do your stars foretell?)'

He replied: 'Advaniji, I myself am unable to understand. I feel intrigued. What I read from the stars doesn't make sense.'

I asked him, 'What makes sense to you?'

He said, 'At least my reading of astrology says we are heading for a two-year exile!'

I said, 'How come? Things are looking up for us. Mrs Gandhi is disqualified. She has been held guilty of electoral corruption. Her election has been invalidated. She may do something about it. What we have achieved in Gujarat is not ordinary. If a Gujarat-type front can be made before the Lok Sabha election in 1976 it will be good.'

Panditji said he couldn't say anything beyond this.

This conversation took place on June 16, 1975. Ten days later when we were arrested by Indira Gandhi, I thought of Panditji. 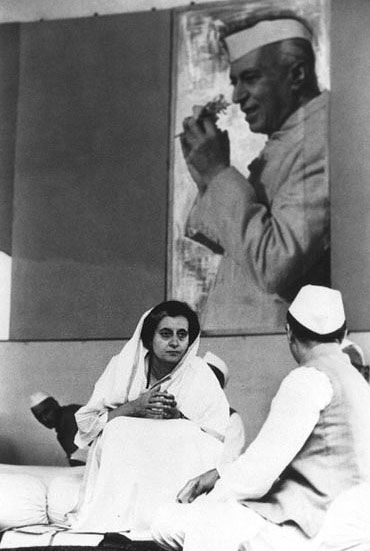 When were you arrested?

Atalji (Atal Bihari Vajpayee), myself, (Socialist leader) Madhu Dandvate and (Congress-Organisation leader) Shyam Nandan Mishra were arrested in Bangalore where we were attending a meeting of a Parliamentary committee.

Shyam Nandanji used to say that the government would release us as soon as the next Parliament session comes. I told Shyam Nandanji I don't believe in astrology or any such things. But Panditji was not trying to impress me. He had predicted a long exile. We were not released.

I subsequently saw the Congress party writing editorials in the National Herald asking why India can't have a single-party democracy like many African countries? That made me apprehensive.

I could see that a party as big as the Congress had such a weak commitment to democracy. They argued that the Emergency has benefited country. They said the trains were running on time and people were attending office on time.

At that time I asked someone to get hold of a copy of the Rise and Fall of the Third Reich. I read it again in September. I wrote the piece 'A tale of two emergencies'. We sent the copy to our party's underground workers. They made copies and distributed it at the Commonwealth Parliamentary Conference in New Delhi.

The Intelligence Bureau got upset about it. I had compared India under the Emergency with Nazi rule in Germany and had listed the similarities between the two. Both had twenty point programmes.

They tried to guess who the writer was. They arrived at the conclusion that it must be me. They sent an officer to the Bangalore jail to inquire. The article is part of the appendix in my autobiography.

What was your understanding of the design behind the Emergency?

I had mentioned it in my book on the Emergency. I had written that we were doubtful about it even before. In 1971 when India fought the war with Pakistan, the Emergency was imposed. We had asked why was it not withdrawn?

We had organised a seminar against it where a former chief justice had come along with eminent jurists. We argued then that when the war was over and Bangladesh created why was the Emergency still on? We argued that they (Indira Gandhi's Congress government) wanted to extend it so that the election would be delayed up to 1977.

It is only during the Emergency that the terms of the Lok Sabha could be extended. We never thought that an internal emergency would be imposed. But they did (impose) it.

Part 2 of this interview: 'Power corrupts and nobody wants to let go of it'

Related News: Panditji, Indira Gandhi, Rediff, Congress, Dr Vasant Kumar Pandit
Print this article
Indira Gandhi and her advisers were surprised by the ease with which they could silence democracy 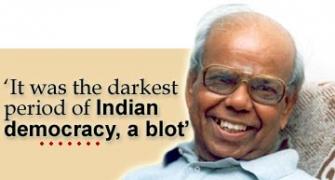