'What is there to worry about, he has asked, when there is so much freedom in the country?'
'Freedom can never be adequate, as Kher seems to think.'
'Its presence should be so pervasive that all citizens will feel secure and expect justice to be done if anything untoward happens,' argues Amulya Ganguli.
Illustration: Uttam Ghosh/Rediff.com 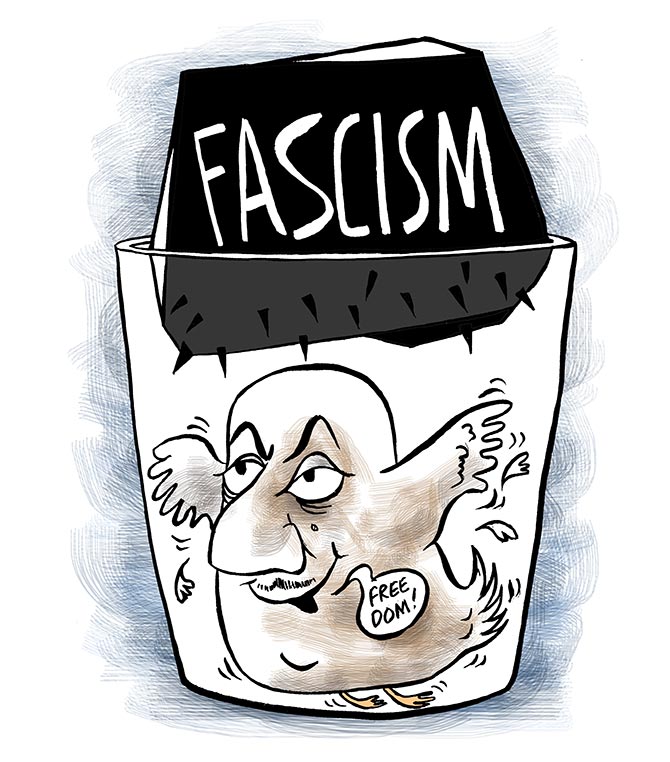 Anupam Kher has returned to the politically/communally charged battlefield after a longish absence.

The saffron film star was probably mulling over the seemingly fading fortunes of his favourite party, the BJP, as it has lost four assembly elections in a row -- Karnataka, Rajasthan, Madhya Pradesh and Chhattisgarh.

For a person who believes that the country's future is dark without the BJP at the helm, the setbacks must have been disheartening and somewhat puzzling as well as to why the voters are so foolish as not to understand what is good for them.

Now, he also appears to be puzzled by his fellow film star, Naseeruddin Shah's unease over the safety of the Muslims in the wake of the Bulandshahr killing of a cop by the saffron gau rakshaks.

If a policeman can be gunned down with impunity, how safe are the Muslims?

Kher, however, has looked at the scene from a different angle.

What is there to worry about, he has asked, when there is so much freedom in the country?

Where else, he wants to know, can troops be pelted with stones and an air force chief be criticised?

However, the answer lies in the fact that these 'liberties' can taken by the citizens because fascism has not yet been fully established in the country.

Had it been in force, the stone-pelters -- mostly teenagers -- would have been shot and not targeted only with pellet guns which can inflict no graver injury than blindness.

In fact, the army chief had once regretted that the pelters only threw stones and not bombs or used guns, in which case, the army could be opened fire with ease of conscience.

Now, the most that the security forces can do is to tie a pelter to the bonnet of a jeep so as to deter the miscreants.

It is another matter that such treatment of a civilian falls foul of the Geneva conventions.

As for the Congress leader, M Veerappa Moily, criticising IAF hief, Air Chief Marshal Birender Singh 'Tony' Dhanoa, the laws of defamation are there for anyone who feels aggrieved.

But the security forces are not above the law in a democracy unlike in a fascist State.

Kher may believe that it is not a big deal if a particular community feels threatened and one of their prominent members expresses his misgivings.

Given all the prevailing freedom, as he thinks, they can seek police protection, either as individuals or in groups.

But the point of democracy, unlike fascism, is that no one should feel scared about being set upon by ideologically and politically motivated thugs.

Nor should anyone be forced to cancel a show as Naseeruddin Shah had to do after protests by the Hindu Right.

Nor told to go to Pakistan, which is the destination favoured by the right wing for dissenters.

It is unlikely that Naseeruddin Shah will be forced to leave as M F Husain had to for offending the Hindu Right and die in exile.

But these are signs of an incipient fascism, which bring no glory to a nation.

Freedom can never be adequate, as Kher seems to think.

Its presence should be so pervasive that all citizens will feel secure and expect justice to be done if anything untoward happens.

If a community thinks that freedom is not omnipresent, as it should be, it is cause for concern and does not call for a mocking response.