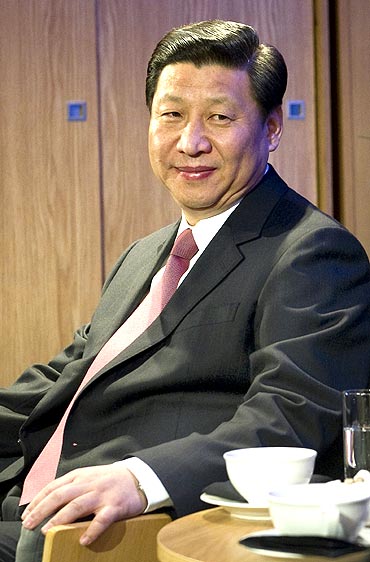 To attempt guessing the future of a Chinese leader, it is always tempting to look into his past or into his lineage.

It is what US diplomats have done and thanks to Wikileaks, a better picture of Xi Jinping, who will take over the mantle of 'core leader' of China from President Hu Jintao in 2012, is emerging.

After the Eighteenth Party Congress in Beijing, Xi will soon wear three hats: General Secretary of the Chinese Communist Party, President of the People's Republic of China and equally importantly, Chairman of the Central Military Commission which controls the powerful People's Liberation Army.

In cables released in December, US Ambassador Clark Randt painted an interesting portrait of Xi, particularly after the latter met Randt for dinner at the US embassy in Beijing. Xi was then Zhejiang Province Communist Party Secretary.

That evening, Xi showed a great interest in development; he told Randt that Zhejiang was a driving force behind national economic growth: "Zhejiang ranks high for income, low for income disparities, and makes substantial contributions to migrant worker employment and transfer payments of fiscal revenue to the central government".

The future President pointed out that "the faster a province grows, the greater the amount of revenues that the province will transfer to the central government." Moreover, these revenues contribute to support poorer regions in central and western China.

Xi affirmed that in his province, party and government officials 'are regularly informed of citizens' complaints and plan to address recurring concerns about education, affordable housing and healthcare. He obviously wanted to project himself as a modern leader caring for the masses. More interesting, he told his interlocutor that he had nothing against the United States. He quoted his May 2006 visit to the US: he had been impressed, especially after exchanging views with some members of Congress in Washington.

That day, Xi confided to the US Ambassador that he was a fan of Hollywood World War II movies and criticised Chinese movies "for neglecting values they should promote"

In another cable, in November 2009, the US Political Minister Counselor Aubrey Carlson gives some more details on Xi's career and character. The US official believes that he is 'exceptionally ambitious, confident and focused', and has had 'his eye on the prize' from early adulthood. The US State Department was informed that 'unlike many youth who made up for lost time by having fun after the Cultural Revolution, Xi chose to survive by becoming redder than the red.

"He joined the party and began mapping out a career plan that would take him to the top of the system. In our contact's view, Xi is supremely pragmatic and a realist, driven not by ideology but by a combination of ambition and self-protection."

In a way, Xi Jinping is a true princeling, as the descendants of senior Communist rulers of the first and second generation are known (Xi belongs to the Fifth Generation). According to the US cable: "The most permanent influences shaping Xi's worldview were his 'princeling' pedigree and formative years growing up with families of first-generation CCP revolutionaries in Beijing's exclusive residential compounds'.

Xi believes that he is one of the legitimate heirs of the revolutionary elders; therefore he deserves to rule over China.

Other informants working for the US embassy add that "Xi is not corrupt and does not care about money" and at some point, Xi was "quite taken with Buddhist mysticism, displaying a fascination with and knowledge of Buddhist martial arts and mystical powers".

In February, Reuters quoted some unpublished Wikileaks cables 'obtained through a third party'. They cover the period from October 2006 to February 2010 and are based on conversations with numerous Chinese sources such as scholars, senior journalists. Reuters' leaks do not bring out much new stuff.

However, one issue which has been neglected by the 'leaks' are the tribulations of Xi Jinping's father, the veteran Communist leader Xi Zhongxun.

It might be in the life of older Xi that one can find the direction which China will take after the Eighteenth Congress of CCP in 2012. Interestingly, the world media did seem too interested in the details of Xi Zhongxun's two lives (the first before 1962 and the second after 1978, with a gap of 16 years in jail or 'rehabilitation'). The China media has also avoided the issue, but one can understand why.

During the first part of his life (mainly between 1949 and 1962), Xi Zhongxun was associated with one of the most remarkable leaders of modern China: Marshal Peng Dehuai. Once the Dalai Lama told me, "He was my favorite Chinese". Peng was the only person who dared to take on Mao Zedong at the beginning of the Great Leap Forward (according to the latest researches, it led to the death of 65 million people).

In the late 1940's, while Peng was the commander of the first field army whose responsibility was to look after northwest China, Xi Zhongxun was the political commissar. Along with the second northwest field army (led by General Lui Bosheng and Commissar Deng Xiaoping), Peng's army 'liberated' Tibet. From that time, Xi Zhongxun was associated with the main Tibetan leaders, particularly the Dalai Lama and the Panchen Lama.

As a representative of Mao, it was Xi who officially bid farewell to the Panchen Lama when the latter left for his maiden visit to Tibet in 1951. He told the young Lama: "When you get back to Tibet, do not hurry to push various things. Please take account of the whole picture in Tibet. The priority is unity among Tibetans. Only when Tibetans unite can our work in Tibet really make progress."

Apparently, Xi did not want to force a foreign ideology on the Tibetans: "Everything in Tibet should follow the principle of cautious and steady progress. If conditions are not ripe for something, do not do it; if the upper-hierarchy patriotic public and leadership figures do not agree with it, do not do it."

During the following years, Xi continued to work closely with Tibet and Peng, he was eventually nominated vice-premier of China. It is probably in 1954/55 that he was gifted a Rolex watch by the Dalai Lama who visited Beijing for several months.

However, Xi's fate took another turn during the Lushan Conference of July 1959, when Peng Dehuai, a native of Hunan, came back from a tour of his province and decided to speak out on the Great Leap Forward. He told Mao in no uncertain terms that China was on the brink of the greatest man-made disaster; as a result he was purged and replaced as defence minister by the Machiavellian Lin Biao. Mao never forgave Peng for having spoken against the Great Leap Forward.

Another turn came in September 1962, during the 10th Plenum of the Party's 8th Central Committee of the CCP. Mao, who had remained in the background after the Lushan Conference, decided to come back on the front stage. In one way, the Plenum marked the beginning of a movement which culminated in the Great Proletarian Cultural Revolution four years later.

During the Plenum, Mao reemphasised class struggle 'to prevent the emergence of revisionism'. He denounced 'the members of the bourgeoisie right in the party ranks'. They were accused to try to rehabilitate the intellectuals and the scientists: "The party has not yet properly educated the intellectuals. The bourgeois spirit hangs over like a ghost over their heads." Mao reasserted that the Great Leap Forward was the right thing for China.

It was during the Plenum that it was decided to 'teach a lesson' to India. The attack on India, two months later was for Mao and his new protégé Lin Biao a way to reassert their supremacy over Peng Dehuai, Lui Shaoqi and Deng Xiaoping.

It was also the beginning of the end for the Panchen Lama who a few months earlier, sent his 70,000 character petition to Zhou Enlai detailing the suffering of the Tibetan people between 1959 and 1962. Mao called the petition 'a poisoned arrow shot at the party by reactionary feudal overlords'. But the first casualty of the Plenum was Xi Jinping's father. He was 'fixed' by Kang Sheng, Mao's wily inquisitor under a bogus pretext. His mistake: he had been too close of Peng Dehuai who had dared to criticise Mao. Xi also happened to be in touch with the Panchen Lama. He was demoted and sent into the 'wilderness'.

After his rehabilitation in 1978, Xi Zhongxun became a trusted lieutenant of Deng Xiaoping and governor of Guangdong. Here, he was responsible for proposing and implementing China's first Special Economic Zone in Shenzhen. This experiment symbolised the new direction of Communist China. Xi is said to have told Deng Xiaoping "We need to reform China and implement this economic zone even if it means that we have to pave a bloody road ahead and I am to be responsible for it."

His biographers say that old Xi is "remembered for his friendship to his colleagues, his tolerance to diverse cultures and religions, his idealism of an open market socialist country and his integrity in his beliefs".

One understands that Xi junior 'ate bitterness' during the difficult years when his father was out of power.

Will Xi Jinping emulate Zhongxun and bring 'reforms' to China? It is a billion Yuan question. But Xi has to sit on the Zhongnanhai throne first and with the 'flower' revolutions spreading over the planet, nothing can be taken for granted in the Middle Kingdom.

Why China is wary of Middle-East uprisings