'In the present era of strategic uncertainty and rapidly changing threats, no military professional disputes the necessity of a joint planning staff for the planning and conduct of joint operations,' notes Brigadier Gurmeet Kanwal (retd). 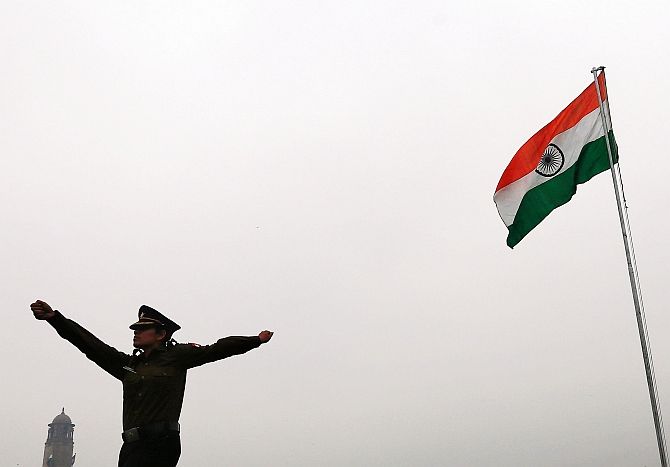 Ending the speculation caused by the unexplained delay in the announcement of the new army and air force chiefs, the government approved the appointment of Lieutenant General Bipin Rawat and Air Marshal Birender Singh Dhanoa to the two posts, respectively, on December 17, 2016, barely two weeks before the present incumbents are to retire.

Both army commanders are senior to him by virtue of their date of commission into the army.

Appointing a new chief of the army, the navy or the air force is a prerogative of the government and there cannot be a quarrel with this fundamental tenet of civilian control over the military.

The government may choose to appoint the next senior C-in-C to the post, as has mostly been the case in the past, or ignore the principle of seniority and choose the most suitable candidate among all the contenders.

However, unless objective criteria are laid down and studiously observed, deep selection runs the risk of the politicisation of the senior leadership of the armed forces.

It will be an adverse development for the management of national security if senior military leaders begin to look over their shoulders to discern whether intended actions, for example in counter-insurgency operations, will have negative repercussions for one political party or another. Or, if they deem it necessary to cultivate friends among political leaders.

One saving grace of the recent government announcement of the new chiefs for the army and the air force is the widespread speculation, particularly in the social media, that though General Bakshi will not be the next army chief, he may soon be appointed the first Chief of Defence Staff (CDS).

The post of CDS was approved by the Vajpayee government in 2001, but is yet to be established.

Defence Minister Manohar Parrikar has said on several occasions, including while releasing The New Arthashastra: A Security Strategy for India on November 10, 2016, that he will soon send his recommendations for the appointment of the CDS to the Cabinet Committee on Security. If this turns out to be true, it will be a welcome development.

The need for an early appointment of a CDS must be seen in the light of the efforts aimed at undertaking urgently needed defence reforms. Many attempts were made to streamline the national security decision making apparatus after independence, but these were mostly superficial.

After the Kargil conflict of 1999, a comprehensive security review was undertaken when the government appointed the Kargil Review Committee headed by the late K Subrahmanyam.

The committee looked holistically at the threats and challenges and examined the loopholes in the management of national security.

The committee made far reaching recommendations on the development of India's nuclear deterrence, the management of national security, intelligence reforms, border management, the defence budget, the use of air power, counter-insurgency operations, integrated manpower policy, defence research and development, and media relations.

The CCS then appointed a Group of Ministers to study the Kargil Review Committee report and recommend measures for implementation.

The task force on higher defence management was headed by Arun Singh, former Union minister who was then an advisor to the ministry of external affairs on security matters and who had headed the Committee on Defence Expenditure in the early 1990s.

Based on the reports of the four task forces, the GoM recommended sweeping reforms to the existing national security management system.

Among the major recommendations of the Arun Singh task force was the creation of the post of the CDS with a tri-Service joint planning staff HQ to provide 'single-point military advice' to the Cabinet Committee on Security.

The Cabinet Committee on Security accepted all its recommendations, including the one for the establishment of the post of the CDS -- a decision that has still not been implemented.

The two reasons cited for the deferment were the lack of political consensus on the establishment of the post of CDS and opposition within certain sections of the armed forces.

The early appointment of a CDS is an inescapable operational necessity. More than ever before, and especially in the nuclear era, it is now necessary for the national security decision makers to be given 'single-point military advice' that takes into account the inter-dependence of each of the armed forces on the other to meet complex emerging challenges.

Success in modern war hinges on the formulation of a joint military strategy based on the military aim and its joint and integrated execution.

At present, under the system bequeathed to India by Lord Ismay in the early 1950s, the three Services draw up their individual operational plans based on the Raksha Mantri's Operational Directive.

Only limited coordination is carried out at the operational level and the tactical level.

In the present era of strategic uncertainty and rapidly changing threats, no military professional now disputes the unavoidable necessity of a joint planning staff for the planning and conduct of joint operations so that integrated operations can be planned 'top down.'

HQ IDS will undoubtedly meet this requirement in the years to come, but if it remains headless, its functioning will remain disjointed and it will never carry the clout necessary to ensure that difficult and sometimes unpalatable decisions are accepted by the three services without questioning.

It is an idea whose time has come.