News
Business
Movies
Sports
Cricket
Get Ahead
Money Tips
Shopping
Sign in  |  Create a Rediffmail account
Rediff.com  » News » Why this election matters so much for Farooq Abdullah

Why this election matters so much for Farooq Abdullah

'And the old war horse has left nothing to chance. He campaigned vigorously in the by-election defying his age,' says Mohammad Sayeed Malik, the distinguished commentator on Kashmir. 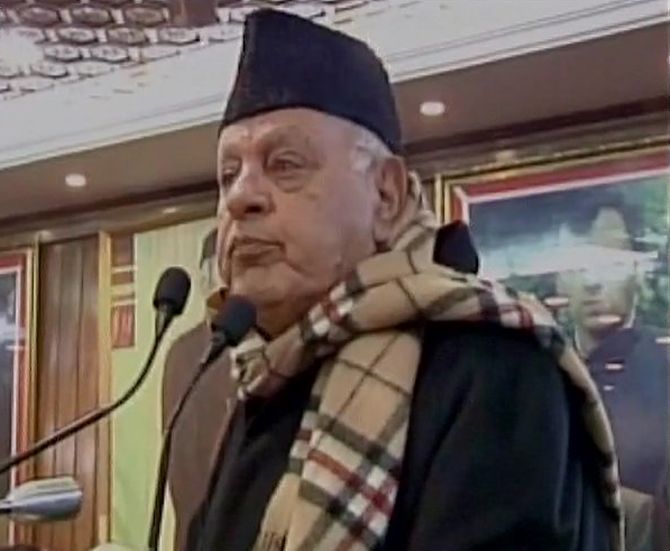 Now that the listless campaigning has ended and the rhetorical dust has been washed out by the rain, it is time to take a poll-eve look at the by-election scene in the Kashmir valley.

For sure, the by-elections in the Srinagar and Anantnag Lok Sabha constituencies have got reduced to virtually a no-stake game for the aam aadmi, barring the fate of the two -- or three -- reckonable contestants in the fray.

Veteran Farooq Abdullah, political greenhorn Mufti Tassaduq Hussain and, somewhere between the two of them, Ghulam Ahmed Mir, fielded respectively by the National Conference, the Peoples Democratic Party and the Congress, are the visible faces of the not-so-visible contest.

One thing that can be foretold with utmost certainty even before the first vote is cast and the last one is counted is that notwithstanding the bombastic claims trumpeted during the dull campaigning, nothing is going to change as a result of its eventual outcome.

THe PDP will remain in the saddle in awkward company; the NC will continue to mark time, awkwardly straddling across two (separatist and mainstream) stools and the Congress would try to immunise itself from the fallout of its national level irrelevance.

The only material factor left to be watched is the eventual fate of Farooq, Tassaduq and Mir -- in that order. And, interestingly, that is of quite some significance to them individually.

Farooq has to prove that his solitary electoral setback is behind him.

Tassaduq -- the late Mufti Mohammaed Sayeed's only son -- has willy nilly become the torch bearer of the Mufti legacy.

Mir is out to avenge his 2014 electoral defeat and also to demonstrate that he was a better performer than his predecessor.

Compared to the other two, Farooq is playing for higher stakes.

He simply cannot afford a successive defeat. His defeat in the 2014 parliamentary elections to the PDP by a huge margin was an anti-climax to his maiden, unopposed election from the same seat way back in 1980.

And the old war horse has left nothing to chance. He campaigned vigorously in the by-election defying his age (he will be 80 in October).

Tassaduq, a highly rated professional in cinematography, is a generation apart from the NC war horse.

The circumstances of his entry into active politics left him with no choice but to pick up the gauntlet and jump into the fray.

He took his time to make up his mind and, as of now, his clean image seems to be his most valuable political asset.

Tassaduq's campaign speeches were devoid of worn out rhetoric and he was able to cut a distinct profile, attracting the attention of his age group.

But for the prestige of his surname -- Mufti -- Tassaduq, probably, has least personal stakes in the fray, compared to the other two contestants.

His (unlikely) defeat will not matter much to him in substantial terms while a (likely) win can firmly launch him on the political pad.

Mir was unlucky in the 2014 assembly polls to lose (Dooru) by a slender margin (just over 100 votes) and is looking forward to avenging that defeat.

There really is nothing else to write about him in the limited by-election context. At the moment he does not look to be the proverbial dark horse to upset the PDP’s applecart.

Rhetorically, the contending parties tried hard to kick up dust and din, but did not go far in the valley's rocky political terrain.

For the NC a simple, ordinary by-election became the 'crucial determining factor in the ideological battle,' notwithstanding the haunting reality that the Abdullahs had pioneered the path for an alliance with both, the Congress and the BJP, in the not too distant past.

For the PDP, it became the battle to uphold the spirit of 'Mufti Saheb's dream.'

Nearly three years in office, the PDP-BJP coalition is yet to touch Mufti's 'Agenda of Alliance,' not to speak of implementing it.

How the by-election could change that course remains to be seen.

The Congress was yet again hamstrung between the NC's free-for-all rhetoric and the PDP's 'promised' dreamland.

Campaigning concluded, the critical issue that needs to be watched is the voter turnout.

This scenario keeps alternating between the two principal combatants -- the PDP and the NC.

The one in the Opposition, at the given time, suspects that the ruling establishment was clandestinely patronising the poll boycott plank owned by the separatist camp.

Since 1996, that has been the pattern in successive elections.

This one being no exception.

And those who know testify that this indeed is a critical material factor for winning and/or losing the contest. 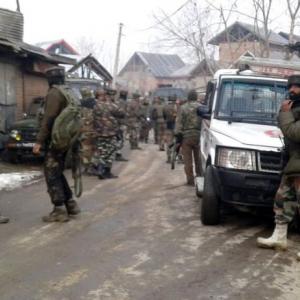