Why the Opposition failed on Friday

'It is unclear whether there will again be such a confrontational moment in our politics before we all go to vote in 2019,' says Aakar Patel. 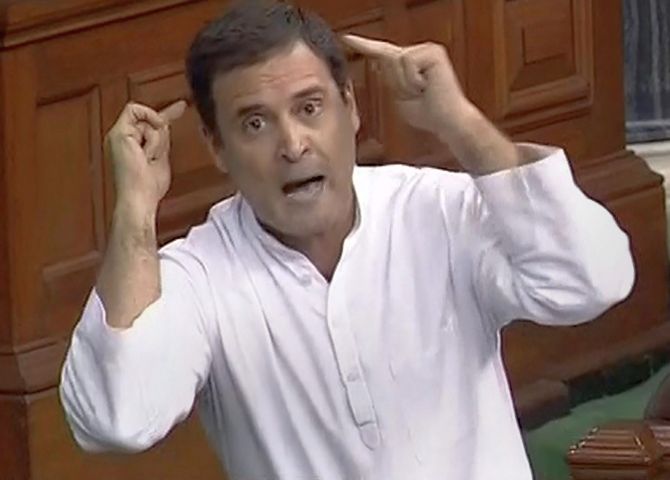 IMAGE: During his address in Lok Sabha, Rahul Gandhi told the Modi government to listen to him and not be afraid of the truth. Photograph: PTI Photo

Given these numbers it was not clear to what end the issue had been moved in the Lok Sabha, and nobody was surprised at the vote.

Other than the Shiv Sena (and we will look at what its intent is later) there was hardly a thing that went wrong for the prime minister inside the House.

Perhaps the real intent then was for the Opposition to launch its campaign for 2019 through this effort.

Was it successful? Let us examine it.

If the purpose was to use the moment and produce a line of attack that is memorable and distinct and seems like it is going to have resonance with a large number of people, then the moment was not used efficiently.

From both sides, the material was the same and so was the packaging.

For Modi this was not a problem because he is operating on the same successful framing that he has for the last six years.

The problem was larger for the Opposition, which must be creative if it has to change the narrative, and it does not have that much time.

What do I mean by this?

Six years or so ago, the India Against Corruption movement and then the Nirbhaya episode produced mass mobilisation against the existing polity.

The government was corrupt and inefficient and unable to protect citizens and it existed purely for a few.

Modi launched himself into this moment and captured it.

He was then, and he remains now to some extent at least, outside this framing.

If the polity is corrupt, then he is trying to fix it.

If the polity is dynastic, then he is trying to break it.

If the system is weak and soft against terror or Pakistan then he will change that through the force of his personality.

A lot of this is posturing.

One man does not and cannot change a country, especially of the complexity and size of India.

But if there has been a break in this narrative, it has been a slow chipping away of it, rather than a dramatic revealing of the emperor's clothes.

This is the sort of thing that the moment in Parliament should have been used for, and to my mind was not.

The press does not usually cover Parliament in our country with any degree of depth. Britain has the tradition of the parliamentary sketch. In this the newspaper reporter reviews the events taking place inside the House of Commons through the personalities of the politicians. It is colourful reporting and most enjoyable to read.

Indian readers do not get this regularly, because Parliament is chaotic when it is functional.

On the days when it actually functioning, like it was for the no-confidence motion, the moment was ripe to be seized. It wasn't.

Other than the hug, there is nothing special that the media have taken away from the debate.

The hug made Modi vulnerable because he did not anticipate it and he is unused to physical intimacy that is not initiated by himself.

It also caught him unawares and he is not good at non-scripted engagements.

The second thing that was possible for the Opposition, other than to create a new narrative, was to produce the thread that would bind the disparate alliances that are forming against the BJP.

At the moment they seem to have little that binds them either in terms of ideology or ambition.

The articulation of a vision was required. A vision that was, even if vague and open, expressed in lyrical fashion.

That is what the best politicians are able to do. And Modi was certainly able to do it in 2014.

If the dominant theme of the 2019 election is to be the BJP versus a series of alliances across India, then the logic or the need for that did not jump out in the speeches.

On the other hand the BJP has never been particularly good at building of alliances, and it accepts the fact. It does not bend over when it is confronted with an obstinate ally.

I have been observing the manner in which the Shiv Sena and the BJP have allied continuously since 1995, when they won the election in Maharashtra.

Since that year, each time there has been an election call, the Sena has acted in the same way that it did this time.

It decides to strike a path of independence, and it badmouths the BJP, while the BJP and its leaders remain silent.

In the end it is the Sena that folds and decides, after all the fire and brimstone, that its best interest is served through an alliance with the BJP and that is what it signs up to.

It is unclear whether there will again be such a confrontational moment in our politics before we all go to vote in 2019.

India does not have the tradition of the televised debate between candidates and so there is no other chance for a one-on-one between the prime minister and the individual trying to take his job.

The best thing we have is the no-confidence motion, and that was unfortunately, not helpful in producing any more clarity about what the great theme of 2019 will be. 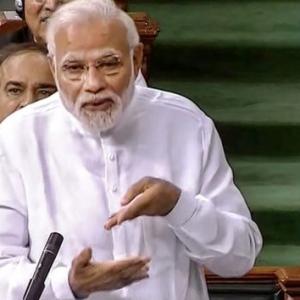 Why the no-trust motion fell flat