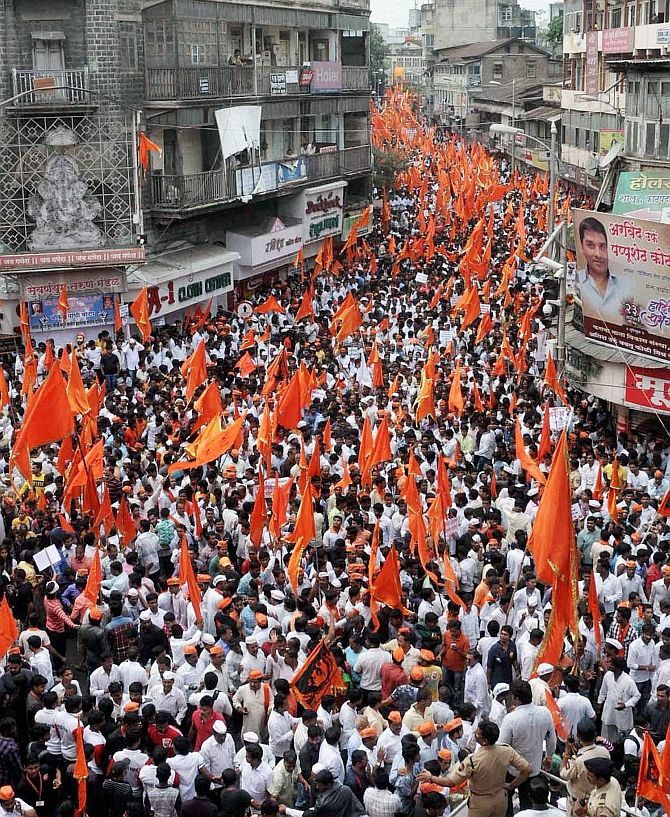 'The participants and organisers have rejected their own political leadership and shown the door to leaders who have tried to claim power at these rallies.'
'Instead, the Maratha masses have reclaimed their power and stakes in the larger scheme of things,' says N Suresh.

All the political parties in Maharashtra have been alarmed by the discipline and determination of the #MarathaMorcha where lakhs of youth and women have participated.

The root of the unrest may lie in the Kopardi gang-rape and murder of a Maratha girl by three Dalit youth, which sent shock waves through the state. That incident was the breaking point.

The Marathas have long been isolated in Maharashtra -- politically, socially and culturally. They are a formidable vote bank of 32 per cent in the state, mostly tillers, small land holding farmers and manual workers.

A far cry from the perception of a powerful community, thanks to the 135 odd Maratha families who have ruled the state.

In such a scenario, when people allege that the Marathas have enjoyed the benefits of power -- especially political power -- and ask why they are upset and demanding reservation in education and jobs, the Marathas get very angry.

Most people don't understand the extreme disparities within the Maratha caste group and society at large.

The Kopardi incident triggered intense introspection within the community.

The youth, especially the educated, decided to shed the false perceptions of their community. They would not pick up swords, but instead follow Mahatma Gandhi's non-violent ideology. 'Be the change that you want to see' was the initiative.

They realised that even their caste has been patriarchal. And now was the time to bring about change.

Their strategy is simple: Reach out to all, first the Marathas, and then any other caste, community or people who are empathetic and want to be part of this change.

Never before has Maharashtra witnessed such large rallies in every district. The rallies held since July have seen on average 500,000 to 800,000 people.

In Pune, the crowd of Marathas was reported to have exceeded 20 lakh (2 million). Now, even Muslims have joined these rallies.

These rallies are extremely well organised with girls and women in the forefront, followed by young men, then others, political leaders and cleaning volunteers last.

At every rally volunteers distribute food and water packets, which are disposed off in a disciplined manner.

When news of these initial rallies began surfacing, the reactions of politicians and media houses were on expected lines. They thought this would soon die down.

The next predictable reaction was that Sharad Pawar may be behind this because he did initially say that the Prevention of Atrocities Act was being misused, but true to his style he withdrew.

Interestingly, even Pawar was shocked by the continuous large rallies. People need to respect the common man more and stop giving Pawar or any other Maratha politician undue credit for this mass strength. These are different Maratha organisations who have garnered confidence from their community.

It is a typical reaction that when there is a mass upsurge, there has to be a political force or leader to guide them. There are now demands that the organisers and funders of these rallies to come forward. The mindset is that there has to be a conspiracy for such mass turnout and protest.

People who have been deprived, face atrocities and are abused can come together without outside money or leadership. The pooling of resources is always from within, because the minute you turn outwards you have lost the plot and the advantage of holding power.

This is the first rule in Saul Alinsky's book, Rules for Radicals, wherein he says, 'Power is not only what you have, but what the enemy thinks you have. Power is derived from two main sources -- money and people.'

The enemy here includes their own leadership, the upper castes and the eroded system that has made them vulnerable. It is amusing that the enemy predictably underestimates the power of the Maratha people and the resources they have.

The participants and organisers have rejected their own political leadership and shown the door to leaders who have tried to claim power at these rallies. Instead, the Maratha masses have reclaimed their power and stakes in the larger scheme of things.

This obviously makes everyone uncomfortable -- politicians, the media, the upper castes and society. Hence, we are seeing counter-rallies being organised and attempts to break the current force. But these have been in vain.

Which brings us to Alinsky's Rule 6: 'A good tactic is one your people enjoy. They'll keep doing it without urging and come back to do more. They're doing their thing, and will even suggest better ones.'

The predictable reactions are giving the Marathas ample opportunity to do a lot more using the fun element. 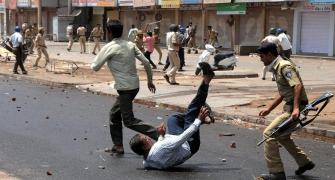 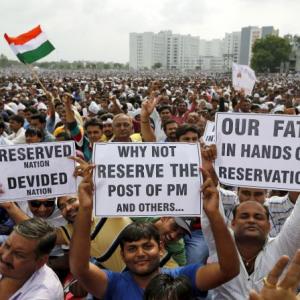