Yes, Aurangzeb was a tyrant who ill-treated his subjects. But was he the only Mughal emperor guilty of this, asks Syed Firdaus Ashraf. 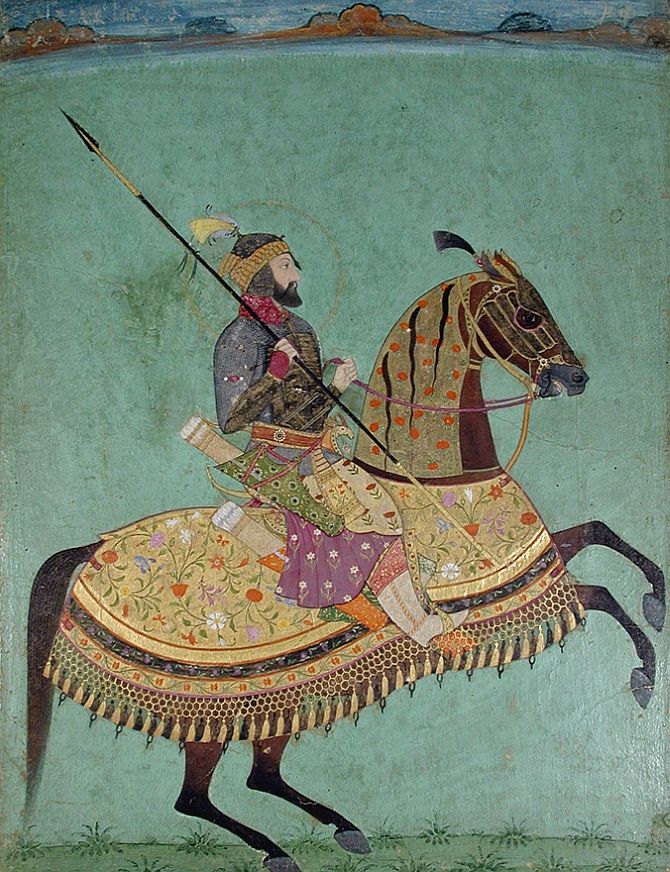 Last week, after Delhi Chief Minister Arvind Kejriwal announced on Twitter that Aurangzeb Road was being renamed A P J Abdul Kalam Road, I asked a friend how he felt about the renaming.

"The renaming is justified," he felt. "Aurangzeb was a tyrant and an enemy of Hindus. He destroyed many temples. Among the temples raided during Aurangzeb's reign were the Kashi Vishwanath temple and the Krishna Deo temple at Mathura."

I didn't want to get into an argument, but wondered why Kejriwal and his Aam Aadmi Party government had targeted only Aurangzeb?

After all, there are other roads in New Delhi that serve as stark reminders of a past many Indians find unpalatable, like Jahangir Road and Shahjahan Road, named after Mughal emperors who were as tyrannical as Aurangzeb was.

Jahangir we know for his judicial system and love for art. But here is what happened to Kangra fort, Himachal Pradesh, in 1620 when it was captured by Jahangir -- as noted by the emperor himself in his autobiography, Tuzuk-e-Jahangiri.

Abraham Eraly quotes from it in his book Emperors of the Peacock Throne: 'I gave orders that the kazi, the chief justice, and others learned in the law of Islam, should accompany me, and perform the ceremonies required by our religion.'

'We mounted the fort, and by the grace of God, prayers were said, the khutbah was read, a cow was killed and other things were done such as never had been done before from the foundation of the fort to the present time. All this was done in my presence and I bowed myself in thanks to the Almighty for this great conquest, which no previous monarch had been able to accomplish. I ordered a large mosque to be built in the fortress.'

Jahangir was also responsible for the execution of Guru Arjan Singh, and the blinding of his own son Khusrau. He also rebelled against his father, Emperor Akbar.

And what about his son Shahjahan? He too rebelled against his father just as Jahangir had done. Shahjahan was on the run for three years after waging an unsuccessful war against Jahangir.

Given that, you would expect the prince to make a better emperor than the man he fought to replace, but no. Shahjahan was every bit as tyrannical as his father Jahangir.

According to Shahjahan's biographer Abdul Hamid Lahori, who wrote the Badshanamah, 'It had been brought to the notice of his majesty that many idol temples had been begun but remained unfinished at Benares... The infidels were now desirous of completing them. His majesty, the defender of the faith, gave orders that at Benares, and throughout all his dominions in every place, all temples that been begun should be cast down. It was now reported from the province of Allahabad that seventy-six temples had been destroyed in the district of Benares.' (You can see the external link here.)

If that was the lot of Hindus under the man renowned the world over for building the Taj Mahal, other communities fared no better

'On the 11th Muharram,' Lahori writes, 'Kasim Khan and Bahadur Kambu brought 400 Christian prisoners, male and female, young and old, with the idols of their worship, to the presence of the faith defending Emperor. He ordered that the principles of the Mohammadan religion should be explained to them, and that they should be called upon to adopt it. A few appreciated the honour offered to them and embraced the faith: They experienced the kindness of the emperor.'

'But the majority in perversity and wilfulness rejected the proposal,' Lahori add. 'These were distributed among the amirs, who were directed to keep these despicable wretches in rigorous confinement. When anyone of them accepted the true faith, a report was to be made to the emperor, so that provision might be made for him. Those who refused were to be kept in continual confinement. So it came to pass that many of them passed from prison to hell.'

Now, if Aurangzeb was a tyrant and Hindu baiter, were Jahangir and Shahjahan saints? No. The only difference between them and Aurangzeb was that he reinstated jiziya, the tax imposed on non-Muslim subjects, on Hindus, and that after 21 years of his rule in 1679.

Of course, as a strict Islamist, Aurangzeb banned wine, music and art in his empire. He ordered all prostitutes to be married as prostitution was declared illegal. Aurangzeb's supporters state that he led a life of a fakir and never drank water from silver or golden cups.

When Aurangzeb died he had given prior instructions, writes Eraly. 'Four rupees and two annas, out of the price of the caps sewn by me, are with Aia Beg, the mahaldar. Take the amount and spend it on the shroud of this helpless creature. Three hundred and five rupees, from the wages of copying the Quran, are in my purse for personal expenses. Distribute them to the fakirs on the day of my death...'

'Do not spend it on my shroud and other necessaries... Bury this wanderer... with his head bare, because every ruined sinner who is conducted bareheaded before the Grand Emperor (God), is sure to be an object of mercy... Cover the top of the coffin on my bier with a gazi (a coarse white cloth). Avoid the spreading of a canopy.'

Can Kejriwal explain why he has opened a Pandora's box by only renaming the road named after Aurangzeb? What about Jahangir Road and Shahjahan Road in the national capital?

Kejriwal's decision is bound to have national repercussions. The Shiv Sena in Maharashtra has already renewed its demand to rename Aurangabad as Sambhajinagar. Expect similar demands from others too.

Mr Kejriwal, in your zeal to score political points over the BJP with soft Hindutva, you have ensured that India remains trapped in the Mandir-Masjid-Mughal matrix.