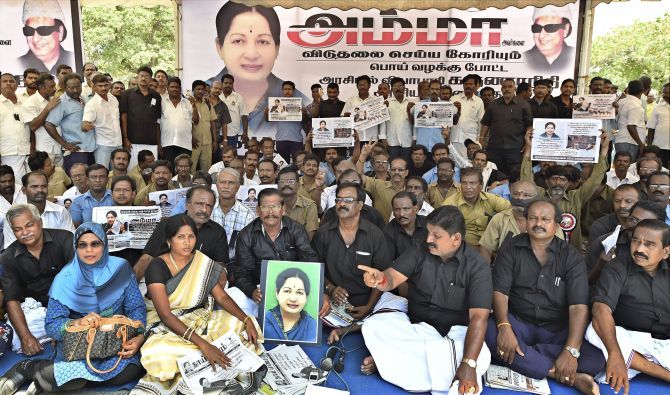 As Justice Chandrasekhara reportedly observed during the hearing on Jayalalithaa's bail application, only the Supreme Court had granted bail to Lalu Yadav -- but not before the Rashtriya Janata Dal spent 10 months in prison.

A cursory reading of trial Judge John Michael Cunha's verdict revals that his judgment seems to have taken into account all possibilities of appeals flowing to the high court and/or the Supreme Court.

The judgment has also addressed most, if not all, of the procedural issues that any defence team would have raised, or wanted to raise in the appeals courts -- and come up with explanations and reasoning for the court rejecting the defence arguments in each one of the issues flagged.

In doing so, Judge Cunha has repeatedly referred to petitions and/or appeals that Jayalalithaa's lawyers had taken up to the Madras or Karnataka high courts and/or the Supreme Court of India.

It is noticeable from the trial court verdict that most of the procedural and other issues that the defence had taken up in the summing-up arguments were among the same issues that it had already taken up to the higher courts, at least once earlier.

Jayalalithaa's defence team had already exhausted most, if not all, questions of law and procedure long before the trial had reached the summing-up stage ahead of Judge Cunha reserving his verdict for September 20, later re-scheduled to September 27.

Even this re-scheduling, which might have had contributed to the delay in the high court hearing the bail petition by almost a week, was at Jayalalithaa's instance.

It related to the defence's concerns for Jayalalithaa's personal security; she is in the Union home ministry's Z-Plus security category.

Could things have been different if in the course of their duty, Jayalalithaa's security apparatus was allowed to deal with the matter instead of the defence having to approach the trial court would be among the unanswered questions in this case.

Karnataka Congress Chief Minister Siddaramaiah has clarified that his government has no role in shifting Jayalalithaa and the other convicts in this case to a prison in their native Tamil Nadu.

Siddaramaiah has also pointed out that the trial itself was conducted in a Bengaluru court on the Supreme Court's express directions. He has indicated that it is for the courts to decide on the issue, if approached.

At the bail plea hearing in the high court, the defence team focussed exclusively on obtaining bail first before moving on to address other concerns.

Shifting Jayalalithaa to a prison outside Karnataka would have been on the list of the next course of action.

State governments reserve the right to declare any premises a 'prison' under the respective jail manuals.

While the Karnataka government may not have a political incentive for doing so, AIADMK Chief Minister O Panneerselvam's government would be pleased to initiate the process if the party boss was to be transferred to a prison in Chennai or any other part of Tamil Nadu.

In Lalu Prasad Yadav's case in the late 1990s, the successor Bihar government with his wife Rabri Devi as chief minister declared a government guest house as a 'jail.' That did not last long after the Supreme Court frowned upon the same.

Public Prosecutor G Bhavani Singh's submission on Jayalalithaa's bail plea before Justice Chandrasekhara that the 'State' was not averse to granting 'conditional bail' to the convicts needs to be remembered too.

Though news reports are silent on what Singh may have had in mind regarding those 'conditions,' it is not uncommon for courts to direct the convicts to stay under its jurisdiction, or under the jurisdiction of the high court where the trial had been conducted.

It is in this context that the week-plus long AIADMK protests against Jayalalithaa's conviction and sentencing needs to be viewed. While scores of institutions and individuals across the state felt the urge to 'express solidarity' with Jayalalithaa in her hour of trial and travail, the AIADMK protests were more direct.

Only hours before Justice Chandrasekhara was to hear the bail plea on Tuesday, posters, in the name of a Tamil Nadu minister, an AIADMK MP and a party MLA, appeared on the walls of Chennai, threatening to hold Kannadigas in the state hostage if Jayalalithaa was not released from the Karnataka prison.

Those concerned promptly denied any hand behind the posters. Possibly referring to this and other forms of direct protests and posters, Chief Minister O Panneerselvam, through two separate media statements, attributed them to Opposition parties. He asked AIADMK cadres to end their protests and violence.

Dr Swamy also dangled the fear of Article 356 over the state government. That seemed to have settled matters, and much of the protests were withdrawn after Panneerselvam's statements. 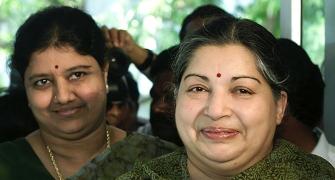 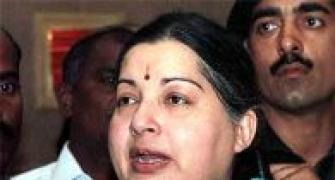 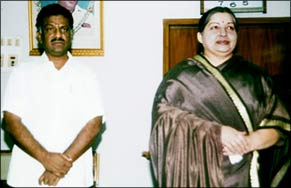