News
Business
Movies
Sports
Cricket
Get Ahead
Money Tips
Shopping
Sign in  |  Create a Rediffmail account
Rediff.com  » News » Why talks are not the way out in Kashmir

Talks will ensure the rise of Islamism in Kashmir and the death of the Idea of India, warns Vivek Gumaste. 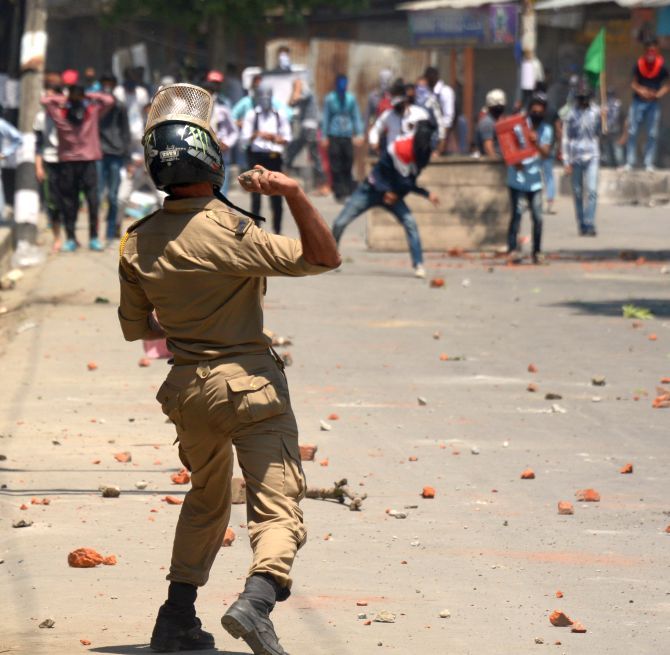 If there is any chance of regaining this rotting region it is a firm no-nonsense policy pursued by this government bolstered by relentless military neutralisation of armed militants like the elimination of Sabzar Bhat, Burhan Wani's successor on May 27.

The sliver of doubt that lingered regarding the dubious underpinnings of the Kashmiri insurgency has been unequivocally and categorically erased by recent events.

A series of revelatory incidents -- the gruesome murder of Lieutenant Umar Fayaz, a wild but on the dot rant by a local Hizbul Mujahideen commander, and a successful sting operation by a news channel -- have brought to the fore the inherently ugly visage of the Kashmiri movement.

It is without question a Pakistan sponsored, rabidly fundamentalist, religious movement that is anti-national in character.

Azaadi, or the call for freedom, is nothing more than a deceptive and misleading façade to garner undeserved respectability.

Crowning this payload of explosive information was an investigative report conducted by the India Today channel (external link) that provides irrefutable evidence of Pakistan's diabolical complicity in fomenting trouble in the valley by plying Hurriyat leaders with tonnes of money.

The report details the role of Hurriyat's provincial president (Geelani faction) Naeem Khan, who oversaw this operation and acted as a conduit ferrying money from contacts in Delhi to separatists in Kashmir.

On tape, Naeem Khan is seen claiming: 'You need chaos for disorder. It doesn't matter if that means burning down railway stations, police stations, schools, panchayat buildings... So far, 35 (schools) have been burnt. They were burnt because we were present there.'

'Nothing is possible without (our) support... If Rs 300-400 crore is pumped in, then the Kashmir unrest could be carried on for another three months.'

After the video was aired, Naeem Khan threatened the India Today staff in Srinagar and demanded that the video be pulled off the air.

JKLF chief Yasin Malik went a step further: He assaulted India Today reporter Kamaljit Sandhu and smashed her cell phone when she sought his reaction to the expose.

In addition to the Pakistani factor, the pretence of Kashmiri insurgency being a secular struggle also came crashing down in the same week when a video (most likely authored by the local Hizbul Mujahideen commander Zakir Musa) surfaced that put a big question mark on the ideological basis of this violent movement.

Countering a statement by Hurriyat leaders that proclaimed the Kashmir struggle was purely 'political' and had 'nothing to do with ISIS or Al Qaeda,' Musa calls the Hurriyat leaders 'hypocrites, infidels, followers of evil', and threatens to chop off their heads 'if they create hurdles in the path of making Kashmir an Islamic State.'

Further, he alludes to their repeated invocation of religious chants and poses this rhetorical but telling question: 'Why do you come and address people in mosques?' (Hindustan Times, May 13, 2017, 'Hizbul threatens to behead Hurriyat leaders over Kashmir statement')

This angry exchange lays bare the immutable reality: This was, is and will always be a fundamentalist movement intent on creating an Islamic State devoid of minorities.

Add to these two incidents the brutal murder of Lieutenant Umar Fayaz of the Indian Army, to complete this horrific jigsaw puzzle of a blueprint for the future: A vision of brutality, chicanery and treason.

Lieutenant Fayaz, a Kashmiri who had been recently inducted into the Indian Army, was on a holiday in Kashmir to attend a cousin's wedding when he was abducted and dismembered by terrorists.

He was killed because he represented a different narrative, a growing one that is aligned with the mainstream of India that promised Kashmiri youth a fruitful life of security and harmony as opposed to the path of murder and bloodshed.

That these militants will not balk at killing one of their own to propagate their message of hate, fear and violence was clearly underlined by this inexcusable killing.

In short, the Kashmiri movement is the very anti-thesis of democracy: It represents religious exclusion, violent murder and extraneous manipulation.

There can be no moral justification for this orchestrated evil, yet there is no dearth of peaceniks in India who continue to champion a path of dialogue and appeasement.

In an op-ed column in the Hindustan Times (external link) journalist Barkha Dutt avers: 'The problem remains political but radicalisation and a growing Islamism is real.'

'I met a teenage boy strapped to a hospital bed who marched for slain militant Burhan Wani because he "protects Islam". The Internet has made many angry young Kashmiris part of a global ummah, exposing them to more fundamental strains of Islam.'

'Both Wani and his successor Zakir Bhat released videos calling for a caliphate... If New Delhi does not start a dialogue process soon, there will be no one to talk to.'

Exhortation to talk with radical Islamists in Kashmir is harebrained counsel that lacks pragmatism, and is a fantastic hallucination.

Dialogue has failed irrevocably in Kashmir and inadvertently or advertently created an unnecessary smoke screen that has allowed nefarious elements to flourish unhindered.

Continued talks are a proven self-destructive strategy that will ensure the rise of Islamism in Kashmir and the death of the Idea of India.

If there is any chance of regaining this rotting region, it is a firm no-nonsense policy pursued by this government, bolstered by relentless military neutralisation of armed militants like the elimination of Sabzar Bhat, Burhan Wani’s successor on May 27.

Attempts to undermine this firm resolve by woolly-headed peaceniks must not be encouraged.