Prime Minister Narendra Modi has positioned himself as a credible partner for Bangladesh. He has scored by getting West Bengal Chief Minister Mamata Banerjee to travel with him to Dhaka, says Srinath Raghavan 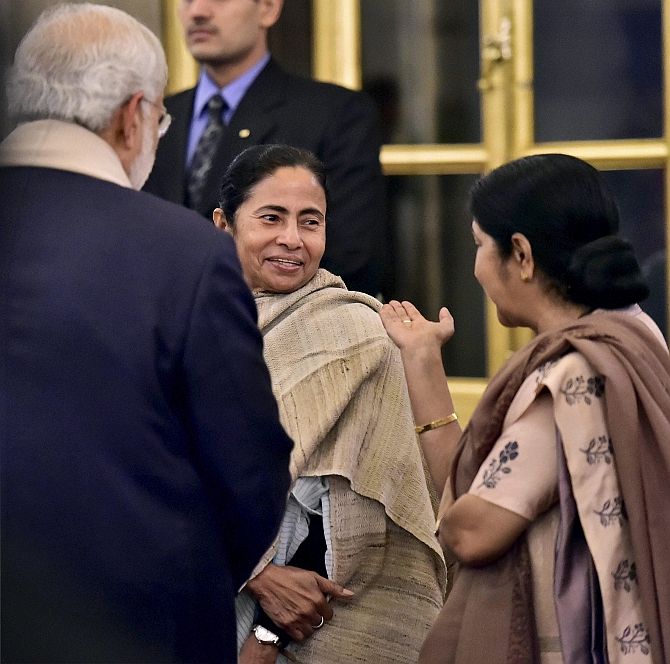 Prime Minister Narendra Modi has done well to reach out to West Bengal Chief Minister Mamata Banerjee, who will accompany him to Bangladesh. Photograph: PTI

Prime Minister Narendra Modi’s upcoming visit to Bangladesh (June 6-7) is impeccably timed. Although South Asia has been at the centre of Modi’s foreign policy, he has waited for the opportune moment to travel to Dhaka.

The conjunction of two factors has ensured that the stars are well aligned for a successful and productive visit. On the one hand, Modi has turned around his party’s stance on the land border agreement with Bangladesh and ensured a unanimous passage of the Constitution amendment in Parliament. By placing national interest above the partisan view of many of his colleagues, the prime minister has positioned himself as a credible partner for Bangladesh.

Unsurprisingly, the move has been warmly welcomed in Bangladesh -- not just by the ruling Awami League but also opposition parties such as the Bangladesh Nationalist Party.

On the other hand, Modi has scored by getting West Bengal Chief Minister Mamata Banerjee to travel with him to Dhaka. She had pulled out of a prime ministerial visit to Dhaka in 2011. Worse, her opposition to an accord on the Teesta River waters had queered the pitch of Indo-Bangladesh relations.

Her position on this issue did not, however, stem purely from parochial calculations. The United Progressive Alliance government had also failed in engaging her politically on the matter. Modi, by contrast, has done well to reach out to her.

The relationship between the government and Banerjee were rocky for the better part of the past year. Bolstered by its performance in West Bengal in the general elections of 2014, the Bharatiya Janata Party overestimated its strength in the state. However, the recent municipal elections have served as a reality check and a reminder that Banerjee remains a force to reckon with. Modi’s decision to extend an olive branch was eminently sensible.

These two developments have poised Modi to reap the dividend in his dealings with Bangladesh. A series of agreements on trade, investment and connectivity seem to be on the anvil for the visit. A successful and productive trip will be the key to advancing New Delhi’s agenda for sub-regional integration involving India, Bangladesh, Bhutan and Nepal.

Foreign Minister Sushma Swaraj has already clarified that an accord on the Teesta is not on the cards. This is not unexpected. Yet  Banerjee’s participation in the visit could prepare the ground for more substantive negotiations.

So far, Bangladesh Prime Minister Sheikh Hasina had held that an accord on Teesta waters was essential to move forward on the issues of road and rail connectivity. It remains to be seen how flexible she will now be on this question. With both the land pact and Banerjee on board, she is likely to realise that this is an Indian government with which she can do business. Moreover, the fact that India has stood staunchly by her over the last year and a half might well dispose her favourably on some of the trickier issues on the table.

Indeed, New Delhi’s solidarity during this period has not been inconsequential for Hasina. Not only did India support her decision to try leaders of the Jamaat-e-Islami for their complicity in the war crimes of 1971, but it stood by her during the ensuing political turmoil.

The Jamaat and its senior ally, the BNP, took violently to the streets in the run-up to the election of January 2014. The BNP and Jamaat’s decision to boycott the polls as well as the poor voter turnout led to considerable international criticism of the Awami League government. At a time when Hasina seemed to be isolated against the onslaught of Western governments and non-government organsisations, New Delhi refused to join the bandwagon and insisted that the government alone could not be held responsible for the political impasse in Bangladesh.

In recent months, against the backdrop of the rise and spread of the Islamic State, some of this criticism has been muted. Still, Hasina appreciates India’s stance -- just as New Delhi is glad of her efforts to curb anti-India insurgent and terrorist groups in Bangladesh.

Amid this bonhomie with the Awami League government, though, New Delhi should not turn a blind eye to some worrying trends in Bangladesh. To be sure, the BNP and Jamaat are primarily responsible for the political gridlock. BNP supremo Khaleda Zia’s decision to boycott the electoral process was ill-advised. Further, her decision to engage in continued violent agitation has dented the democratic credentials of her party. Yet the fact remains that the BNP is the major opposition party and it cannot be cut out of mainstream politics for long. But this is precisely what the Awami League appears to be aiming at.

In the recent city level elections in Dhaka and Chittagong, the BNP’s candidates and cadres were systematically targeted and hemmed in by the government. Again, the BNP’s decision to pull out half-way through the polling day might well have been premeditated to draw domestic and international censure on the government. Yet there is credible evidence that the elections were rigged in favour of the Awami League.

Particularly worrying is the country's election commission’s refusal to take cognisance of complaints and its partisan stance during the polls. Since Hasina has done away with the caretaker system to ensure free polls, it is imperative that institutions like the election commission perform credibly and impartially. The latest elections do not portend well for the future of democracy in Bangladesh.

Of course, India’s leverage in such matters is limited. Equally, the BNP has not been very well disposed to New Delhi either in power or in opposition. But it is also in India’s interest that the space for legitimate opposition is not snuffed out. The alternative of one-party dominance in Bangladesh is a fantasy that cannot be realised. Think only of the country’s most stalwart leader Mujibur Rahman’s attempt to go down this route.

The recent local elections underscore the levels of anti-incumbent feelings. Despite the BNP pulling out in mid-fray, it polled 35 per cent of the total votes as against 55 per cent for the Awami League.

A stable multi-party democracy in Bangladesh is in India’s long-term interest. New Delhi must try and convince the BNP to peel away from the embrace with Jamaat. At the same time, it should encourage the Awami League to keep open the political space for democratic forces. Modi’s well-timed visit could be the appropriate starting point for a far-sighted engagement with Bangladesh. 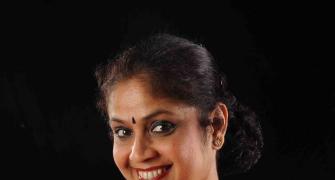 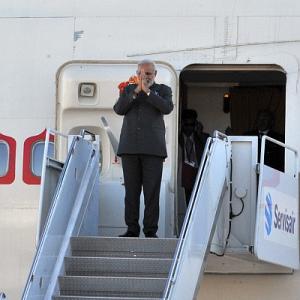